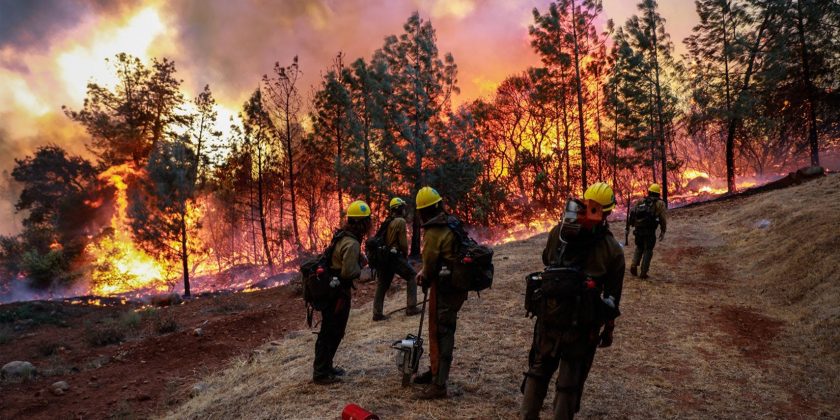 It’s not unknown that much of California is basically on fire at this point in time, and some people with far more disposable income than others can have a little more protection against the flames, at least for their property and items.

Some people can afford to pay for a service called AIG’s (American International Group)  Private Client Group’s Wildfire Protection Unit. The service basically acts as protection for a customer’s home by applying fire retardant materials to property lines. According to Motherboard, the service is made up of AIG employees who can respond to fires and map locations accurately in real time.

PREVIOUSLY: WATCH CALIFORNIA WILDFIRE SPRAYED BY HELICOPTER WHILE CREEPING UP TO HIGHWAY

Just in case you’re wondering, AIG isn’t the only company doing this. There is a large number of insurance companies, one of which is called PURE. Its service is a little different but allows high-paying clients to use Pure’s Group of Insurance Companies’ resources. Some benefits come in the form of consultations and the installation of sprinklers, and of course, the fire retardant tool, which is one of the most useful considering the ferocity of the California fires.

Two well-off people that are apparently using the service are known as Kim Kardashian and Kayne West. Their $60 million home is being protected because of the actions and opportunities of their insurance company. They aren’t the only two who qualify for the Wildfire Protection Unit services, though, those who do qualify make up forty-two percent of Forbe’s 400 richest Americans.

What this shows to the world is that people can protect their home from natural disasters if they have sufficient funds. Now, it makes sense that this doesn’t come at a cheap price, it is an expensive service for the company to run. Simple estimates for individual missions can run the company tens of thousands. Operating costs are high and it can cost around $100,000 for a company to enter this field of work, explaining the high costs for customers. This is completely normal and can happen in all kinds of markets. There’s also the simple fact that both public and private firefighters can’t protect every home out there.

Currently, California has had an estimated forty-four fire-related deaths and has lost around 100,000 acres of land. One can only assume the total costs will keep rising. As reported by Fortune, California’s fire agency actually burned through its budget of $442.8 million for 2018.

READ NEXT: TEXAS WANTS TO END DAYLIGHT SAVINGS… AND THEY MIGHT HAVE A POINT