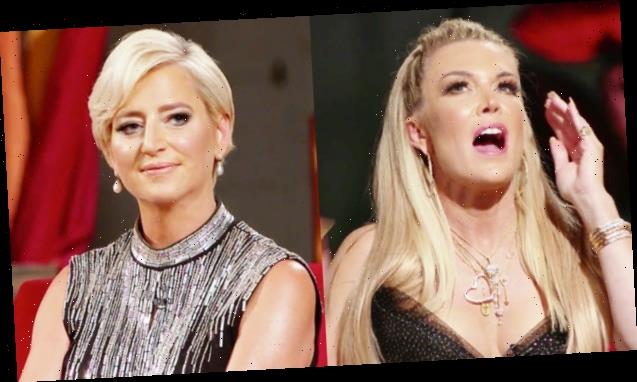 Tinsley Mortimer lashed out at Dorinda Medley during a very heated argument on Part 1 of the ‘RHONY’ reunion special on Sept. 9.

The claws came out during the highly-anticipated Real Housewives of New York City reunion special on Sept. 9, when Tinsley Mortimer finally confronted Dorinda Medley over the “vile” comments she made about her throughout the season. And it all started when the ladies confirmed they hadn’t spoken to each other since Tinsley left the show and moved to Chicago.

While Tinsley blamed Dorinda’s behavior for the lack of communication since then, Dorinda said it had nothing to do with her, and Tinsley “never really spoke to any of us after she [finished filming] every [season].”

The turkey baster comment was so out of line! • #realhousewives #bravotv #tinsleymortimer

But before she could fully share her feelings, Dorinda cut her off and asked if she’s having trouble getting pregnant. Tinsley tried articulating a response, but Dorinda cut her off again and said, “No, I was just saying…I’m sorry about that.” However, Tinsley didn’t accept Dorinda’s apology and said she was being “shamed for wanting a child” and “shamed for not having one.”

Dorinda then clapped back and said, “I’m surprised you’re not pregnant already! You’ve been talking about getting pregnant,” as if it’s super easy for anyone who wants a baby to get pregnant. Ramona Singer then jumped in and said, “Dorinda, that’s not nice.”

Tinsley said that Dorinda’s turkey baster joke was a clear dig at IVF and those struggling with infertility. “A turkey-baster? That’s IVF, ok?” Tinsley yelled. “Andy [Cohen]‘s baby was from IVF. Would you say the same thing to Andy?”

Finally, Dorinda apologized again: “I said I’m sorry I said that. I apologize. It was a bad joke and I’m sorry,” but Tinsley refused to accept it, as she said, “It’s not a joke.” Andy also said he “thought it was mean.”

“[You] said it,” Tinsley concluded. “And it will never go away.”

Later in the episode, Dorinda also deflected when Andy asked her about her drinking habits. The ladies also called out Ramona for her questionable behavior during quarantine.