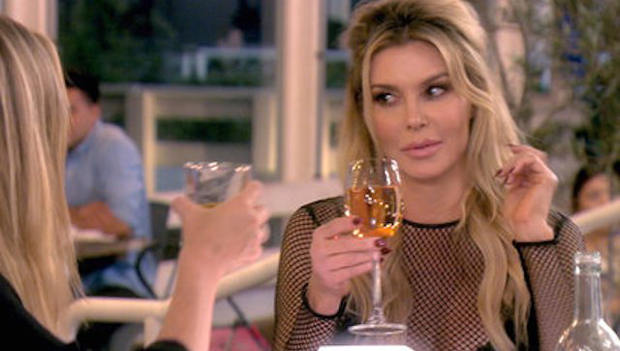 Brandi Glanville returned to ‘RHOBH’ with a vengeance during the June 4 episode of the series, when she and Denise Richards met for a double glass of wine and some trash talk.

Brandi Glanville didn’t waste any time before throwing major shade at Lisa Vanderpump, during her return to The Real Housewives of Beverly Hills on June 4. The former star of the series made a brief appearance this week, during a dinner date with Denise Richards, and their conversation ranged from how they met to Brandi’s history with LVP to how Kim Richards now feels about Denise, following Kyle‘s Halloween party. But what we found most interesting was what Brandi had to say about Lisa!

Almost immediately after they got together, Denise brought up the “Puppygate” story, which most of the housewives have accused Lisa of leaking to RadarOnline. Lisa has vehemently denied doing such a thing, nor knowing who did, but Brandi believes otherwise. “She does have a direct hotline to RadarOnline,” Brandi told Denise, before saying that Lisa “did for sure” leak the story about Dorit Kemsley.

Denise wasn’t so sure what to think since Lisa seems to like her, but Brandi said it’s probably only temporary. “And of course she’s going to like you because you’re young and pretty and blonde, and she likes pretty things. She liked Dorit. She liked me,” Brandi said before going into their history together. “Lisa Vanderpump and I were best friends for 5 years — let’s be clear. Whatever [story] she wants out there, she gets out there.”

She's back, bitches. TONIGHT on a new episode of #RHOBH!

Then, Brandi began, “If you cross her in any way, which I did…”, but Denise stopped her and asked, “Did you cross her or did you stand up for yourself?” And Brandi replied, “A little bit of both. No, I kind of crossed her. I said, ‘You’re not telling the truth in this situation.’ Literally, I spent the past three years being punished for crossing her — in a way. Because she really, in her head, does nothing wrong.”

Brandi was referring to the time — in Season 4 — when she accused Lisa of trying to further spread rumors about Mauricio Umansky allegedly cheating on Kyle. At the time, Brandi claimed that Lisa begged her to bring tabloids, which featured stories about Mauricio’s alleged cheating, on a girls’ trip so it could all be talked about on camera. And just like she’s doing now with “Puppygate”, Lisa denied doing such a thing.

New episodes of RHOBH air Tuesdays at 9pm on Bravo!