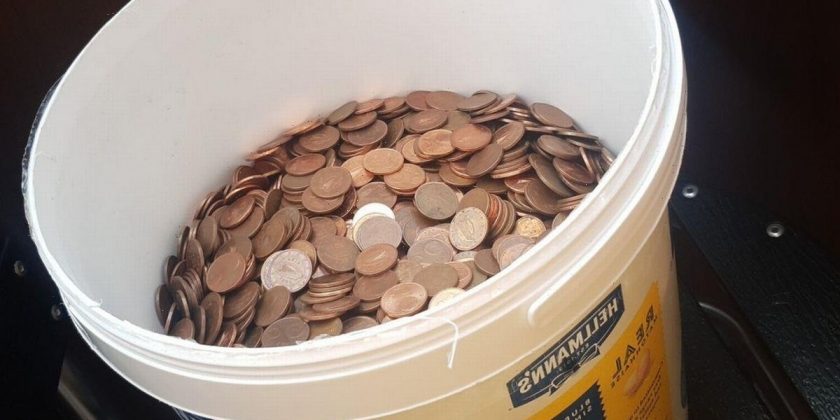 A restaurant worker in Dublin has claimed that he got his final pay from a job in copper coins after repeatedly asking for the money.

The bloke wrote: "After chasing my last pay for weeks I finally got it but in a bucket of 5c coins."

Another photo showed Rian weighing the industrial-sized bucket which clocked in at a huge 29.8kg (4st 6lb).

In later tweets, the lad showed screenshots of the conversation he had with his former employer over WhatsApp, reports LadBible.

He said: "Update here are the texts just hid the number. Also the Hellman's jokes aren't getting old each one still gets a chuckle.

“Cheers for the support."

In the original message, Rian asked for his “back week of pay” and said he needed it “ASAP” for college fees.

Then, a reply noted that they would be ready next Thursday. This was changed when Rian chased the employer and they wrote: “Is it okay if I pay you cash next Tuesday? Didn't retain your bank details so is cash okay bro?"

Rian said that cash was “grand”, but he needed the money as soon as possible.

He received the reply: "Like I said I'll have every cent ready for you on Tuesday.

The next day his former boss said: “"Money is at the front door ready for you now."

Which is when Rian claims he found the bucket of coins.

Twitter users were aghast at the payment and some called it “disgraceful behaviour”.

One person commented: "I've been screwed over by many an employer over the years, not as insultingly as this, so you've my sympathies. I've never gone in there and I'm not inclined to after your post."

While another added: "And the world wonders why there's a shortage of hospitality staff…?"

And, a third noted: "This is appalling behaviour from an employer. I'd rather not support a business that doesn't treat their staff with respect."

Others told Rian to return to the restaurant he worked at and pay off his tab with the cash.

They said: "Wait for a while. Get a few mates together and go in some night and run a meal and bar tab under a mates name.

“When the bill comes just lob the bucket up on the counter and say 'This is from Rian' and walk out."

For more lifestyle stories, sign up to our free Hot Topics newsletter here.