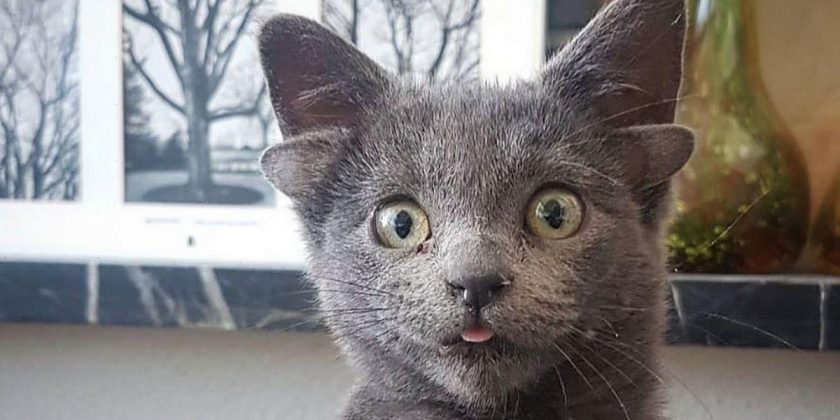 A rescue kitten which went viral on social media for having what looks like four ears has finally found a forever home.

Many people couldn't believe it when they saw Midas, who is a a Russian blue mix, sporting an additional set of ears inside its proper ears.

The deformation is reportedly linked to a recessive gene mutation from the cat's parents.

The smaller ears don't actually help Midas hear any better, and luckily her hearing is perfectly fine with her adorable additional ears.

Despite her deformity, the four-month-old cat was adopted by a woman in Turkey.

The woman is hoping her efforts will encourage other people to take in pets that might not be 100% 'normal".

She already has a dog and another cat, so is hoping Midas will fit in nicely with everyone.

As well as her four ears, Midas is even more unique as she has a white patch on her belly which resembles a heart.

One other cat that hit headlines recently wasn't so lucky as Midas though.

A man revealed he ditched his partner's cat and swapped it for another as the moggy was "aggressive" and "scratched everyone".

However, the guy confessed he did it without her knowing – and still hasn't told her six years on, despite them now being married.

Many couldn't believe the guy had kept up the lie for so long as he told his tale on Reddit.

One said: “How do you all lie to your spouse so easily? I can’t keep anything in for more than a couple minutes without cracking. Feels so fundamentally wrong.”

While a second added: “Delete this post. Delete this account. Never tell anyone, ever. I have seen people divorce for less and I wouldn't blame her.”

A third chimed in: “As someone who’s had a cat taken previously, I would hate you if I were your wife.

"It’s been 12 years and I still get emotional about it and if I were you, I’d ensure your wife never finds out. Don’t tell friends, nothing.”