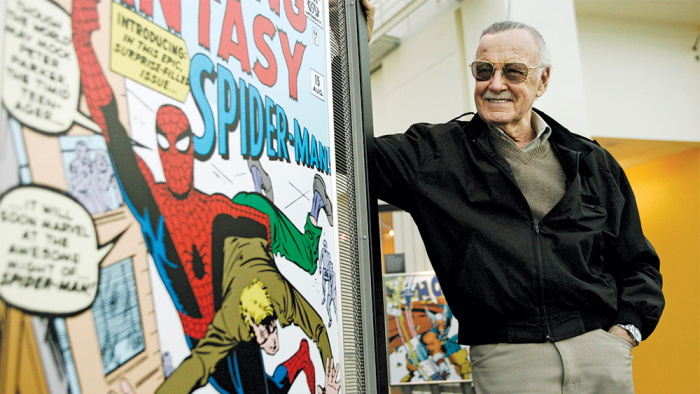 Stan Lee’s creative peak was in the 1960s, when the comic book artist came up with the novel idea that the most compelling superheroes were the ones that were the most human. The masked avengers who, when not saving the world from oblivion, grappled with real-world issues — from financial struggles to alcoholism to the difficulty of getting a date to the prom.

More than five decades later Lee’s influence is still being profoundly felt. The legacy of Lee, who died Nov. 12 at the age of 95, lives on at Marvel, the comic book publisher he helped transform. Today, the company has moved far beyond panels and dialogue boxes. It is responsible for many of the most financially successful film franchises of all time and is also making inroads into television and streaming. It’s Stan Lee’s Hollywood, even if most moviegoers only recognize him from his sly cameos in the “Spider-Man” films and the various “Avengers” outings. This particular mustachioed, ink-stained wretch had as much of an impact on popcorn movies as Steven Spielberg, George Lucas or James Cameron, even if he never slid behind a camera or hunched over an Avid.

Lee never intended to reinvent the comic book genre. He only grudgingly got into the game as a way to pay the bills before writing the great American novel. In fact, Stan Lee is a nom de plume. Lee’s real name, Stanley Martin Lieber, was intended to be reserved for more serious literary efforts.

That was not to be. Instead, history was made in the late 1950s and early ’60s, when the struggling Marvel Comics empowered Lee to come up with some way to compete with the far more successful DC Comics, the publisher of “Batman,” “Superman” and “Wonder Woman.” Whereas DC’s characters tended to be square-jawed exemplars of virtue and altruism, Lee gave an injection of vulnerability to figures who seemed impervious to self-doubt.

The Fantastic Four, Lee’s first major creation, was a family like any other — riven by petty feuds, prone to bickering, but also able to put aside personal differences for the greater good. And so it went from there. Spider-Man, another Lee creation, was a typical teenager, trying to balance crime-fighting with passing calculus; Daredevil was a crusading attorney who also had to contend with an accident that left him blind; and the Hulk was a roiling, barely suppressed manifestation of rage. All of them were revolutionary, cutting-edge additions to a genre that had grown stale. But Lee didn’t abandon all of the traits that made comic books such an enjoyable source of wish fulfillment. Indeed, the sinew that bound all these characters was a desire to do right, a knowledge that they were spandexed parts of the main and a realization that, as Lee noted, with great power comes great responsibility.

“The world always needs heroes, whether they’re superheroes or not,” Lee said in a 2016 interview with The Big Issue. “Since time immemorial there were stories and legends about evil people who had superpowers, and some human being had to find a way to conquer them. It seems to be part of the human condition.”

By putting the human condition back into stories of costumed vigilantes and dastardly villains, Lee left an indelible mark on popular culture. Or, as he would put it, “’Nuff said.”