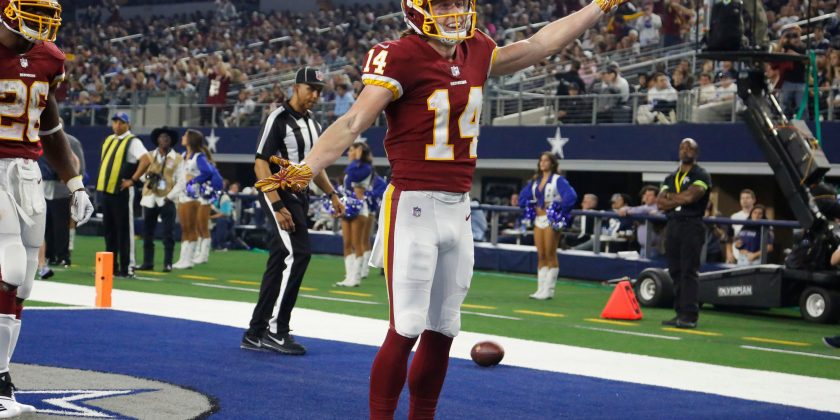 After Washington Redskins wide receiver Trey Quinn scored a touchdown — his first in the NFL — during a Thanksgiving game against the Dallas Cowboys, the rookie celebrated by breaking out into a dance originated by Steve Carell’s character from the beloved NBC comedy The Office.

The Scarn, which was introduced during the “Threat Level Midnight” episode, consists mainly of jumping to the left and right, and extending your arms to shake hands and make new friends.

As clips from the loving homage began circulating on the internet, Carell, 56, applauded the athlete for his rendition of the dance move.

“That’s how do you The Scarn.” the actor wrote on Twitter. “Happy thanksgiving!”

Although the touchdown temporarily put the Redskins into the lead, the Cowboys ended up winning the game, 31 to 23.

RELATED VIDEO: Marquise Goodwin Scores Touchdown After Death of Baby Due to ‘Complications’

Office writer and cast member Mindy Kaling ended up taking a trip down memory lane after she saw Carell’s Tweet, and even shared a link to an official clip from the episode.

“Just saw @SteveCarell’s tweet and found this clip. It’s probably my favorite ever. A classic @bjnovak episode,” she wrote. “Thanks @edhelms for that accent. Thanks Threat Level: Midnight for the memories.”

During the clip, Scott’s coworkers are assembled to watch his film about secret agent Michael Scarn, who is portrayed by (you guessed it) the world’s best boss himself.

Star Ed Helms makes an appearance in the film as a bartender who attempts to cheer up the secret agent by getting Scarn to do his self-titled dance.

Although the spy remarked that he hasn’t “done that dance since my wife died,” as soon as the music begins, he immediately gets up off his chair to perform the moves.