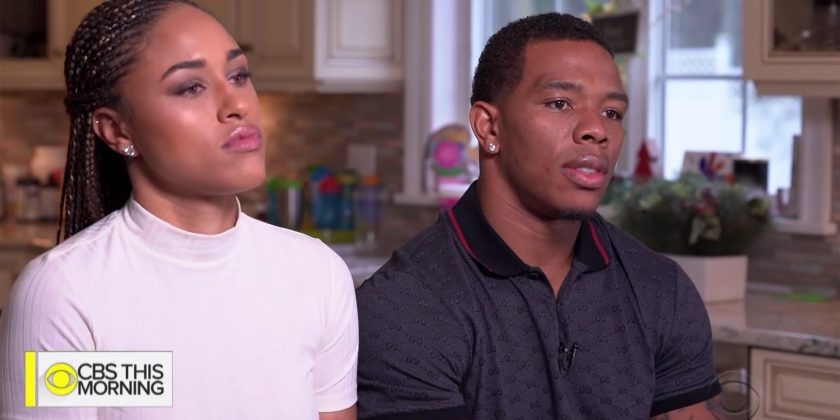 Ray Rice and his now-wife Janay Palmer Rice are speaking out about domestic violence more than for years after he attacked her in an incident caught on camera.

He discussed the incident, in which he appeared to have knocked his then-fiancée unconscious and dragged her out of an elevator, on CBS This Morning in an interview with Gayle King that aired on Tuesday.

The altercation is receiving renewed attention in the wake of a video showing former NFL player Kareem Hunt kicking and shoving a woman earlier this year.

RELATED: Ray Rice: I Should Have Apologized to Janay

Ray — a former Baltimore Ravens running back who is now 31 — hasn’t played professional football since the incident, and told King that his intentions when he speaks out against domestic violence have nothing to do with returning to the NFL.

“Somewhere down the line everybody who’s saying, ‘Does he deserve a second chance for football?’ And this that and the other — I actually got my second chance right here,” he explained, gesturing to Janay, 30.

Ray — who married Janay just weeks after the 2014 altercation and with whom he now shares two children — said he never plans to play the sport professionally again.

“I’ll be the first one to say it. I don’t have to retire to tell you I’m done with football,” he said. “The pressure I was under of being a star — that was the person I hated the most.”

He later revealed that he doesn’t think he ever deserved the opportunity to return after what he did and that he believes the NFL “is doing the work” to stop acts of domestic violence by its players.

When King asked Ray about his own family history with abuse, he recalled that he’d seen his own mother in dysfunctional relationships and that he ended up “normalizing abnormal behavior.”

“I was a man at 11, and then at 21, I got drafted and became a boy,” he shared with CBS This Morning. “When you get to the physical abuse, if it’s one time, that’s still one time too many.”

Janay said she never thought of her relationship with Ray as abusive.

“I just thought we were being a typical boyfriend and girlfriend. We’d argue,” she said. “I didn’t really sit back and think about it until I was forced to think about it.”

She also addressed those who question her claims that the elevator punch was the first and only time Ray has struck her.

“All the naysayers, the people who doubt our genuineness, they could spend an hour with us and they would walk away and say, ‘Okay, yeah, that’s not who they are,’ ” she asserted to CBS This Morning.

Ray added that he “hates” the person he was in the video, and that the couple stayed together because of their long history.

“It was never a thought whether I was going to leave or not because I knew that wasn’t him in that moment,” Janay added. “This is someone I’ve known since I was 15. I knew that we had work to do, and I was willing to move forward and put in the work.”

While Ray hasn’t spoken to Hunt, he said he would consider working with him provided he’s willing “to go the long haul” in preventing abuse against women in his own life and others.

In February 2014, the first video of Ray hitting Janay was released by TMZ. In it, Ray could be seen dragging her unconscious body out of an elevator. In September 2014, the outlet released another clip outlining what preceded it: Ray punching Janay so hard in the face that she fell down.

It wasn’t until the second video was released that the NFL elected to fire Ray from the Ravens. He initially received only a two-game suspension.

“We had to do it. There was no other option,” a source within the Ravens organization told PEOPLE exclusively at the time of his ousting. “We should have done it when it all came out before, and there’s going to be a lot of soul-searching as everyone reflects on how we handled this. But when the newest video came out, the decision was unanimous and final. Ray Rice had to go.”

In a statement posted on NFL.com, league officials said that they did not see the punch video prior to deciding on Ray’s brief punishment: “We requested from law enforcement any and all information about the incident, including the video from inside the elevator. That video was not made available to us and no one in our office has seen it until today.”

Even so, after critics said the two-game punishment did not go far enough, NFL commissioner Roger Goodell apologized to the league’s 32 teams in a letter in August 2014, and vowed to toughen the policies regarding player conduct.

“My disciplinary decision led the public to question our sincerity, our commitment, and whether we understood the toll that domestic violence inflicts on so many families,” Goodell wrote. “I take responsibility both for the decision and for ensuring that our actions in the future reflect our values. I didn’t get it right.

He continued: “A second offense will result in banishment from the NFL. These disciplinary standards will apply to all NFL personnel.”

“I made the biggest mistake of my life,” he said.

Apologizing to Janay as well, he said at the 2014 conference: “We’re in counseling. We’re taking the necessary steps to move forward.”

Ray also then vowed to speak out against domestic violence.

“When the time is right,” he said, “we will go out there and help as many people as we can.”