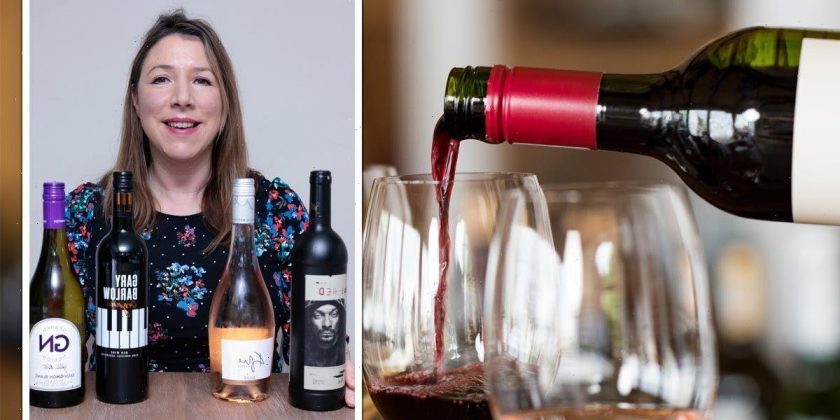 January is the Monday of months, isn’t it? In the midst of struggling to get back into the swing of work and squeeze into our clothes after the festive celebrations, we’re bombarded with campaigns and virtue-signalling social media posts about Dry January, Veganuary and the NHS’s Couch to 5k fitness scheme.

Having a birthday smack-bang in the middle of the most miserable month of the year, I’m naturally averse to Dry January. But this year I’m also indulging my new favourite hobby: celebrity wines. I’m no great connoisseur but what started off as a joke between my husband and I has fast become a genuine interest.

A few weeks before Christmas, Dom came home with a bottle of Kylie Minogue’s £9 rosé from Tesco. I admit I was a bit cynical at first. What does the pint-sized pop princess know about wine, I thought?

Yes, it looked suitably and predictably pink, but would it be any good? When we cracked it open that evening, I was pleasantly surprised. It was crisp, dry and as pleasant as any posh pale pink rosé I’d had from Provence (not that I’ve actually been there).

I was hooked, and I’m not alone.

Launched before lockdown, five million bottles of Kylie’s rosé have been sold worldwide in less than two years worth around £7.7million. And the £12 Kylie pink prosecco is the UK’s most popular rosé prosecco.

A bottle of Graham Norton’s sauvignon blanc – £8 from Asda – followed; a zesty, intense flavour which, again, I really enjoyed. I might even go so far as to say its fruity, dry undertone echoed the personality of the man himself. (Graham also sells a very pleasant Irish pink gin, in case that’s more your cup of tea).

Next, we tried Take That star Gary Barlow’s Spanish red, with “touches of wild berries and rosemary”. Best of all, it’s organic which, as everyone knows, means guilt-free, right?

I wasn’t mad about the label – showing a piano keyboard, I’d rather have had a picture of Take That in their 90s heyday, preferably with their shirts off – but I have to say, it was a pretty nice glass of wine, especially for £7.50 a bottle from Asda.

I’m sure the fact it was organic made me drink a bit more than normal, but at least it was a high-quality, sulphate-free hangover the next day.

But the best was yet to come.

My favourite celebrity wine so far has to be US gangsta rapper Snoop Dogg’s Cali Red. Its bold, rich and uncompromising taste is meant to represent Snoop’s story of overcoming adversity. Indeed, the Drop It Like It’s Hot singer has had a rather colourful life, including several stints in prison for drug possession.

His wine, which comes in at 13.5 per cent, packs quite a boozy punch, and it’s on the pricier side for a celebrity wine, £11 from Tesco.

The rap star teamed up with Australian winemakers 19 Crimes, a line of wines inspired by the convicts-turned-colonists who built Australia, to create his own range.

When it launched the Cali Red in 2020, the company said Snoop embodied the spirit of 19 Crimes – “rule-breaking, culture creating and overcoming adversity”.

Snoop, real name is Calvin Cordozar Broadus Jr, has embraced the food and drink world – even joining forces with US dinner party legend and hostess Martha Stewart (another former jailbird, though this time for stock market fraud) to promote it.

Celebrity wines, however, are no new thing.

The craze, if you can call it that, started when The Godfather director Francis Ford Coppola purchased the Gustave Niebaum vineyard in California’s Napa Valley in 1975.

One of his wines is, touchingly, named after his daughter, Sofia, also a film director, and there’s something quite romantic and very Italian about looking out over verdant vineyards and picking grapes at your sun-drenched villa, isn’t there?

You can almost picture Tony Soprano sitting on the veranda with a large glass of red. For my money, it certainly beats the mean streets of New Jersey.

But let’s face it, other celebrities who have cashed in on the bandwagon in recent years probably aren’t quite as emotionally invested in their wines. It’s just another part of their brand.

The one and only time I visited the Algarve in Portugal, I was mobbed by cardboard cutouts of Sir Cliff Richard, who long ago created one of the Algarve’s best vineyards. The shrines to the octogenarian crooner were almost as ubiquitous as those to the Virgin Mary herself. The only thing missing were the rosary beads.

But how did we get to this state where famous people can sell almost anything?

Is it all part of our current obsessive celebrity culture? In a word, yes. It’s something savvy celebrities, the Beckhams included, realised years ago.

Victoria Beckham wrote in her 2001 autobiography, Learning to Fly, that she “wanted to be more famous than Persil Automatic”. The Spice Girl has gone on to launch a designer clothing and cosmetics range while husband David’s very aesthetically pleasing face and toned bod has been used to advertise everything from underwear to fizzy drinks.

One of the biggest celeb wine success stories, before they broke up, was Brad Pitt and Angelina Jolie’s Miraval estate in Provence.

Their Miraval rosé sold out within just a few hours of being released when it first came out in 2008 and has remained of consistently high quality.

It’s almost as though people thought drinking the nectar of the Mr and Mrs Smith stars could turn them into Greek gods. Or today’s equivalent – ridiculously good-looking film stars.

Though celebrity careers may not last forever, their brand can endure. Wine is a money-making opportunity that’s hard to resist and, God knows, some famous folk need something to do with the millions of pounds they already have.

Perhaps some, such as cantankerous chef Gordon Ramsay, who alongside owning 58 restaurants and starring in more than 10 TV shows, launched his own Vibrante Bianco wine in 2021, are workaholics. But park your cynicism.

As someone who has recently gotten into celebrity wines, there is something appealing about them.

Sommeliers might not agree but for me, it adds an element of curiosity and an extra something which a bog standard bottle of merlot just doesn’t have.

If you see a familiar face, like Snoop Doggy Dogg’s, staring back at you on the supermarket shelves, you’re much more likely to pick up a bottle. Sex sells, as the saying goes, and so do celebrities.

And best of all, if you’ve got the neighbours round for a drink, you can show them you also have a sense of humour and irony.

So it’s a win-win, isn’t it? And I have to say Kylie’s rosé goes perfectly with a pair of sparkling hot pants too. Or so I’m told.