Quentin Tarantino’s first novel is, to borrow a phrase from his oeuvre, a tasty beverage.

It’s his novelisation of his own 2019 film Once Upon a Time … in Hollywood (the book’s title omits the ellipsis). It’s been issued in the format of a 1970s-era mass-market paperback, the sort of book you used to find spinning in a drugstore rack.

It’s got a retro-tacky tagline: “Hollywood 1969 … You shoulda been there!” If it weren’t so plump, at 400 pages, you could slip it into the back pocket of your flared corduroys. 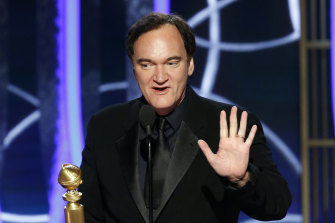 Quentin Tarantino accepts the award for best screenplay for Once Upon a Time…in Hollywood.Credit:AP

Tarantino isn’t trying to play here what another novelist/screenwriter, Terry Southern, liked to call the Quality Lit Game. He’s not out to impress us with the intricacy of his sentences or the nuance of his psychological insights.

He’s here to tell a story, in take-it-or-leave-it Elmore Leonard fashion, and to make room along the way to talk about some of the things he cares about — old movies, male camaraderie, revenge and redemption, music and style. He gets it: Pop culture is what America has instead of mythology. He got bitten early by this notion, and he’s stayed bitten. 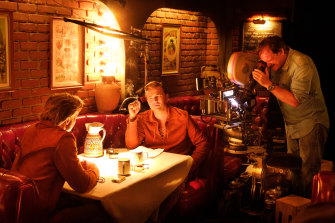 Quentin Tarantino, Leonardo DiCaprio and Brad Pitt on the set of Once Upon a Time … in Hollywood.Credit:Andrew Cooper/Sony-Columbia Pictures

Once Upon a Time in Hollywood runs along the same tracks as the film. Some dialogue is similar, just about word for word. But the novel departs from the movie in ways small and large.

The movie’s Grand Guignol ending, for example, which culminates with the aging actor Rick Dalton (Leonardo DiCaprio) torching a member of the Manson family with a flamethrower, is dispensed with, early in the novel, in a few sentences.

The killings make Rick, whom we discover is bipolar, famous. He hated hippies anyway. Now he becomes “a folkloric hero of Nixon’s ‘silent majority’” and a regular on “The Tonight Show Starring Johnny Carson.” Yet, from his acting career, he remembers every misstep, every mortification, every slight. 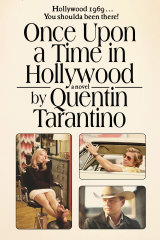 He’s filled with macho advice, which he casually dispenses. If you want to know what killing a man feels like, without actually killing a man, Booth tells Dalton, grab a pig from behind and stick a knife into its throat. Then hold on tight until it dies. It’s as close as you can legally get.

Yet Booth has a sensitive side. He’s a movie obsessive. A lot of his opinions resemble Tarantino’s own. There’s good writing here about acting, about foreign films, about B movies, about early movie sex scenes and about television action directors.

Booth is a fan of the actor Alan Ladd, for example, because: “When Ladd got mad in a movie, he didn’t act mad. He just got sore, like a real fella. As far as Cliff was concerned, Alan Ladd was the only guy in movies who knew how to comb his hair, wear a hat or smoke a cigarette.”

Some of these opinions sound perhaps too much like Tarantino’s own: “Once Fellini decided life was a circus, Cliff said arrivederci.” There’s a list of Cliff’s favorite Akira Kurosawa films. About the cinematography in the 1967 Swedish film I Am Curious (Yellow): “Cliff wanted to lick the screen.”

We discover how Dalton and Booth became friends. Booth saved him from an on-set fire, telling him: “Rick, you’re standing in a puddle of water. Just fall down.” We learn how Booth got his pit bull, a star of the movie. He was given the dog, a champion fighter, to pay off a debt. Booth tags along on some of the fights.

Oh, and Booth did kill his wife. In the film, that plot point is left hanging and has been much debated. Tarantino, happily, doesn’t care if you find Cliff to be lovable.

The murder scene is absurdist in its excess, of course. Tarantino rarely lets a killing go to waste. Violence is the wax his skis ride on. He knows how to fill the screen’s rectangle — or a page in a pulp novel.

The couple are on a boat. Tired of being belittled, Booth impulsively shoots his bikini-wearing wife with a spear gun, which essentially tears her in half. He regrets this immediately. He holds the two parts of her together for seven hours while they lovingly recount their whole relationship. When the Coast Guard arrives and tries to move her, she comes apart and dies.

If I longed at that moment for her — her top half, that is — to slowly hoist an enormous handgun and shoot the disbelieving Cliff in his bronze forehead, well, that’s a different novel.

In Once Upon a Time in Hollywood, Tarantino makes telling a page-turning story seem easy, which is the hardest trick of all.