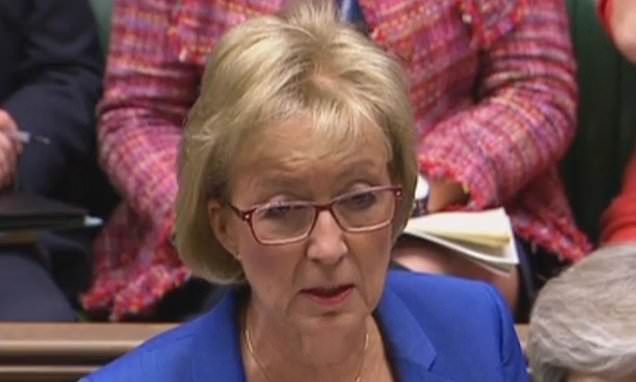 Rotter and a cad? Her head turned to Bercow: QUENTIN LETTS on Andrea Leadsom’s heroic digs at her enemy the Speaker

Andrea Leadsom, heroine of Wednesday, returned to the despatch box yesterday morning and worked in another dig at her enemy Speaker Bercow. The more the House sees of her, the more it takes note.

Labour’s Valerie Vaz, opening the weekly Business Questions, had compared Theresa May to girl-racer Penelope Pitstop in the cartoon Wacky Races, stopping off at EU capitals while ever being pursued by her foes.

Mrs Leadsom had a riposte. ‘I should point out,’ she said with a twinkle, ‘that Penelope Pitstop always wins in the end. All the rotters and cads around her get defeated and she always wins.’ 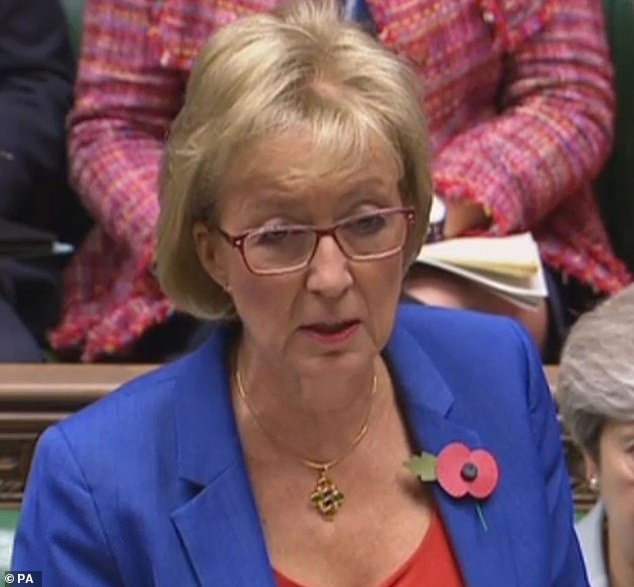 ‘Andrea Leadsom [pictured], heroine of Wednesday, returned to the despatch box yesterday morning and worked in another dig at her enemy Speaker Bercow’

When she said ‘rotters and cads’, she turned her head markedly towards Bercow, who was sitting on his Throne, already noticeably dented by Wednesday’s ‘stupid woman’ controversy.

A rotter and a cad? Yes, that seems fair about Bercow, if too genteel.

Iain Duncan Smith (Con, Chingford & Woodford Green) pointed out that Penelope Pitstop ‘was opposed by a man called Dick Dastardly, who was completely incompetent and lost every time’. Mr Duncan Smith will be able to claim he was referring to Jeremy Corbyn, not Bercow. We believe you, Iain!

Past generations of parliamentarian might have favoured more bookish allusions but what are we to make of Mrs Leadsom? Some on the Left have long regarded her with kneejerk disfavour, thinking her a joke. Her admonishment of the Speaker on Wednesday may encourage them to think again.

She’s brave and she can react fast. Mrs Leadsom is a Brexiteer but has managed to stay inside the May Cabinet, so is plainly no slave to dogma.

Treat with caution this slander that Brexiteers are unbending. They have been a lot more open to compromise than Remainers.

Mrs Leadsom has been Leader of the Commons for almost 18 months and in that time has won support across the House for her courtesy and non-partisan manner. She has been less tribal in the role than some predecessors – eg, Harriet Harman and Dame Margaret Beckett. Cleverer than Harman, warmer than Beckett, too.

MPs appreciate that Mrs Leadsom’s official work, which has included the prevention of harassment in the workplace, has been complicated by the malign presence of Bercow in the Chair.

A Commons Leader must work almost daily with Speaker’s House and it must have been unpleasant to have to face, across the table most days, a man who has been so obnoxious to her.

Meanwhile, the Government has come to rely on her as a media performer and understandably so, for she is fluent without sounding glib, loyal without being unctuous.

She speaks calmly in a voice that belongs to Thatcherism’s aspirational class. She is a woman you could easily imagine making the daily train commute into London.

Behind the scenes, she is plainly an operator, convening the ‘pizza group’ of ministers who thought Mrs May had given too much to Brussels in Brexit negotiations.

She was proved right on that last week when Downing Street had to postpone the Commons vote on Mrs May’s deal.

Unshowy but neat, precise but not lawyerly, Mrs Leadsom answered questions for an hour.

She had to put up with the SNP’s Pete Wishart (mate of Bercow) attacking her for ‘raising the temperature of the House irresponsibly’ on Wednesday. To be accused of rabble-rousing by peppery wee agitator Wishart!

Mrs Leadsom batted him away with good humour. Questions ranged from population growth to Rohingya refugees, high street shops to the treatment of brain cancer, lorries’ sat-nav problems to yesterday’s palaver at Gatwick.

She was asked by Stephanie Peacock (Lab, Barnsley E) about the mineworkers’ pension scheme and was able to answer with information from her time as an energy minister. Alex Sobel, an impressively intense Labour man from Leeds, quizzed her about the draft Environment (Principles & Governance) Bill. Mrs Leadsom gave him a long, assiduous reply.

The weekly Business Statement is every bit as varied as Prime Minister’s Questions.