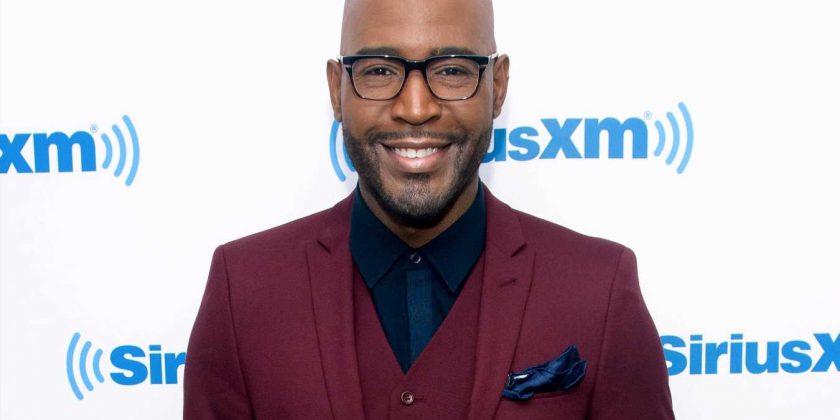 “Somebody the other day called me Frasier,” Karamo Brown, the culture expert on Netflix’s Emmy-winning Queer Eye, says of a recent caller on his new eponymous podcast (available via Luminary). Given that the sitcom character famously played by Kelsey Grammer is a psychiatrist with a radio show and Brown is a licensed social worker working in media, the comparison isn’t totally out of left field. Except Brown had never seen the popular NBC series. “I was like, what the hell? So I watched some of it on YouTube for the first time and [realized], oh sh—, I am a modern-day Frasier!” he says, laughing.

Often described as Queer Eye’s life coach — helping the “heroes,” as they’re called, work through the emotional roadblocks preventing them from being their best self with his fellow Fab 5 members Bobby Berk, Tan France, Antoni Porowski, and Jonathan Van Ness work on interior design, fashion, food, and grooming, respectively — Brown, 38, also published a memoir this year. Among the many things he dissects in Karamo: My Story of Embracing Purpose, Healing, and Hope is his relationship with his religious father, which became strained after Brown came out at 16. “I didn’t want to paint him as just the bad guy,” Brown explains. “He loves me and he thinks I’m great, but in his mind he can’t reconcile that love with what he believes and what he’s been taught is wrong.”

The big revelation in writing that book? “As a parent I’m always thinking, ‘Did I make the right decision of taking custody, bringing him into my life, exposing him to all facets of my world?’ What I realized is that everything I did has turned him into a loving, supportive, exceptional young man. And vice versa; he learned that he had an influence on me becoming a better man.”

Below, read more of EW’s conversation with Brown, where he elaborates on his relationship with his father, collaborating with his son on a book, how his sexuality defines him, and that reported “conflict” he had with Antoni.

ENTERTAINMENT WEEKLY: Queer Eye won three Emmys back in September at the Creative Arts ceremony, and then the following you and the guys presented at the Primetime telecast. When you look back on those couple of weeks, how do you summarize all of it?
KARAMO BROWN: The word that comes to mind for me is validation. I don’t just mean personal validation, I mean validation as a community. I felt validated in my experience as a black man, as a gay man, as a father … all of those have been brought not only to my skill-set on the show. And then also it was validating to know that we’re really doing something and we’re doing it [well]. We have amazing producers that work behind the scenes, but at the end of the day, it falls on the five of us once the cameras start rolling. They can prep us all they want, but once we get there, if we don’t give something, the show will fall flat. If I don’t bring some tears, there goes an emotional component. If Jonathan doesn’t bring the funny, there’s goes the humor. To have those weeks, it just felt validating — wow, we are doing a good job; wow, our story does matter; who we are matters — and people are acknowledging that.

While you were writing your memoir, was there a story or aspect of it that you really debated or really worried about including?
The thing that I was going through and debating for myself was, how do I talk about the relationship with my father and also paint him in a very human, real way? I didn’t want to paint him as just the bad guy, even though him being a bad guy, for me, stems from his inability to accept the fact that I’m a proud gay man and reconcile that with his religion. So it was like, how do I show that he is the reason that I have I have an education, the reason I went to good schools, the reason that so much happened, but he is also the reason that I have so much pain? So my book is really showing how I’ve grappled with this gray area that I’m in with my father and also acknowledging that part of his growth is that he’s in a gray area with me. He loves me and he thinks I’m great, but in his mind, he can’t reconcile that love with what he believes and what he’s been taught is wrong. So as much as I’m like, “You’re bad,” he’s like, “Well in my book, I was taught that you’re bad” — and of course neither of us are right — inherently we both want to try to grow, and as long as there’s that desire to grow, then that’s all you can really ask for.

You are a father yourself. What did you and your son learn about each other as you wrote your new children’s book together?
For me, it was realizing that I didn’t screw up [laughs], which I think is a big fear of most parents, most people. Am I making the right decisions for myself and for my children and the people I love? Only time will tell. You choose a job, you choose a relationship, and then you wake up one day and are like, oh, this was probably not the best decision for me and what am I supposed to learn from this? And as a parent I’m always thinking, did I make the right decision of taking custody, bringing him into my life, exposing him to all facets of my world – what I realized is that everything I did has turned him into a loving, supportive, exceptional young man, and I’m thankful. And vice versa; he learned that he had an influence on me becoming a better man.

On the podcast, you’re giving advice to people who call in, and Antoni was a guest on the first episode where you address personal conflict. There were a lot of sensational headlines that came out of that and seemed to misrepresent the situation, where you talk about an issue that arose between the two of you not long after meeting, but that things are now good because the two of you addressed it. Why was it important for you two to open up about that?
Antoni and I are best of friends now and what my podcast has been about is transparency and really helping people to understand that any challenge they’re going through they can make it through. So I would be a hypocrite to not show them the challenges I’ve been through in my life … I am transparent about me as a parent and father, me in relationships, me co-parenting with my son’s mother, and I do this so people can see, oh, he’s all not preachy, and he has the skills and tools. Everything takes work and is a journey. That’s why transparency in my podcast has been so important.

Booksmart star Beanie Feldstein recently said in an interview with PEOPLE that she doesn’t think her sexuality is her defining feature. How does it define you?
I believe that being a gay man defines me, just the same way being a black man defines me, being a Christian defines me. The definition of who we are is how we respond to the experiences that happen based on being a gay man, a black man, a father, a Christian. People respond to those things, and I have to respond back. And my response is the definition of who I am. That’s all of us – how you respond is the definition of who you are. I’m honored to have being a gay man define a part of me; it’s defined my career, how I approach parenting, how I interact with other communities that feel marginalized, how I interact with everyone.

Celebrate 50 years of gay pride with Entertainment Weekly’s special LGBTQ double issue, on stands now. You can buy all six covers now, or purchase your individual favorites featuring Anderson Cooper, Wilson Cruz, Melissa Etheridge, Neil Patrick Harris, Janet Mock, and Ruby Rose. Don’t forget to subscribe for more exclusive interviews and photos, only in EW. And if you want to get involved in LGBTQ causes, donate to The Stonewall Inn Gives Back Initiative, a non-profit that seeks to eliminate the social intolerance affecting members of the LGBTQ community.