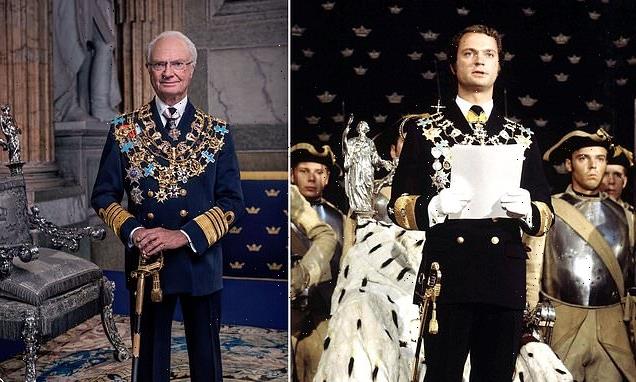 The Queen’s third cousin, 76, will celebrate 50 years on the throne in September – making him Sweden’s longest reigning monarch.

Ahead of his Golden Jubilee celebrations, the Royal Court of Sweden shared a new image of the monarch, which was taken in the Royal Palace of Stockholm’s Hall of State.

Dressed in his admiral uniform, the father-of-three is pictured next to the silver throne, which dates back to Queen Kristina’s 1650 coronation and is used in state openings of parliament. 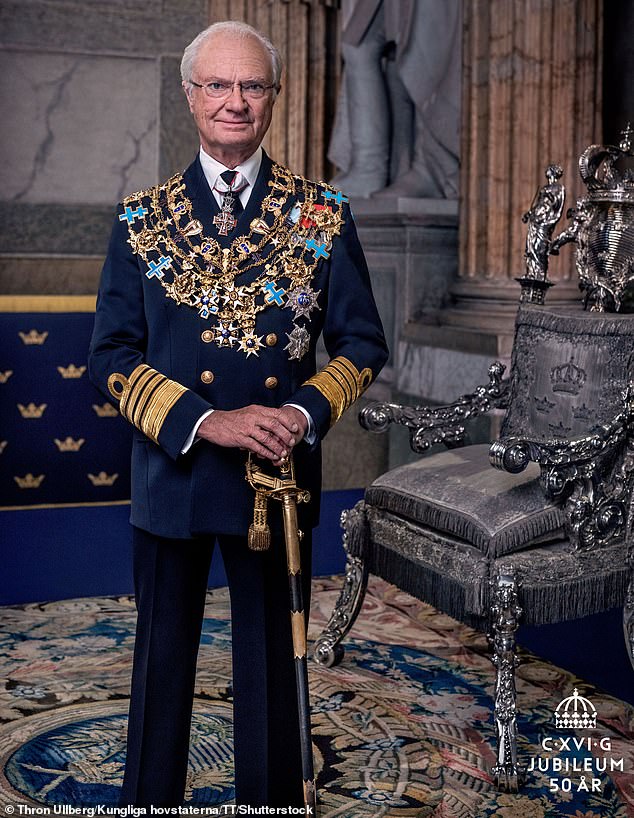 King Carl XVI Gustaf of Sweden is celebrating 50 years on the throne in 2023 – making him the country’s longest-serving monarch. The father-of-three posed in the same ceremonial chains and medals that he wore for his 1973 regal assurance, when he was only 27 years old

Over his uniform, the King wears a number of medals – including the Order of the Seraphim.

This medal – also known as the ‘Blue Ribbon’ – is seen as Sweden’s equivalent to the UK’s Order of the Garter and is the highest honour of chivalry which can be awarded.

On top of this, the monarch also wears the Royal Order of Vasa, the Order of the Sword and the 1840 Order of Dannebrog chain, which can only be given to the monarch’s closest family.

The King also appears to be wearing the exact same ceremonial chains he donned for his 1973 regal assurance, when he became the country’s youngest ever monarch at 27 years old. 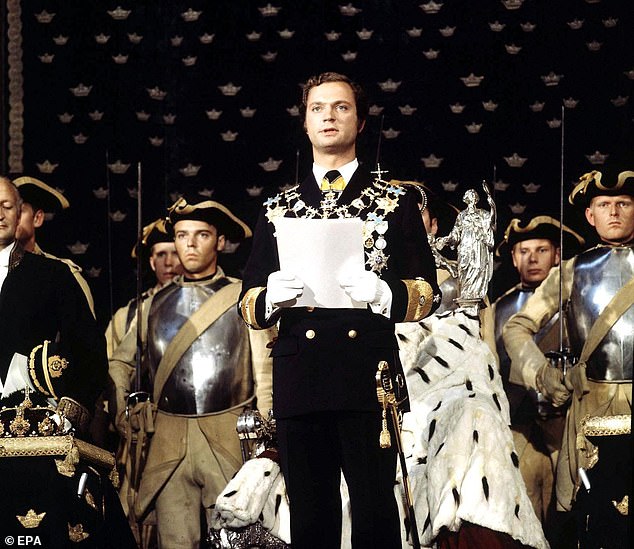 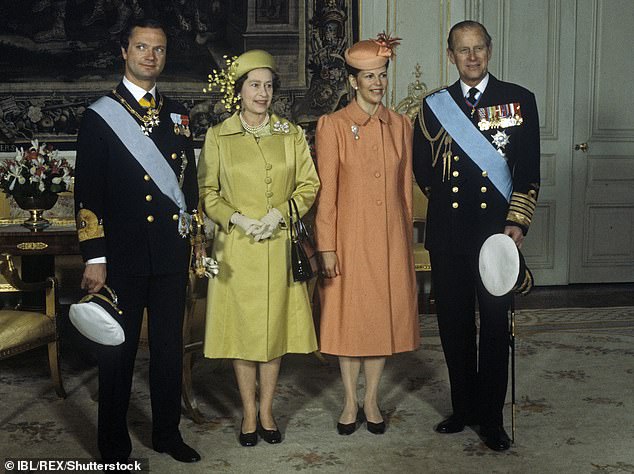 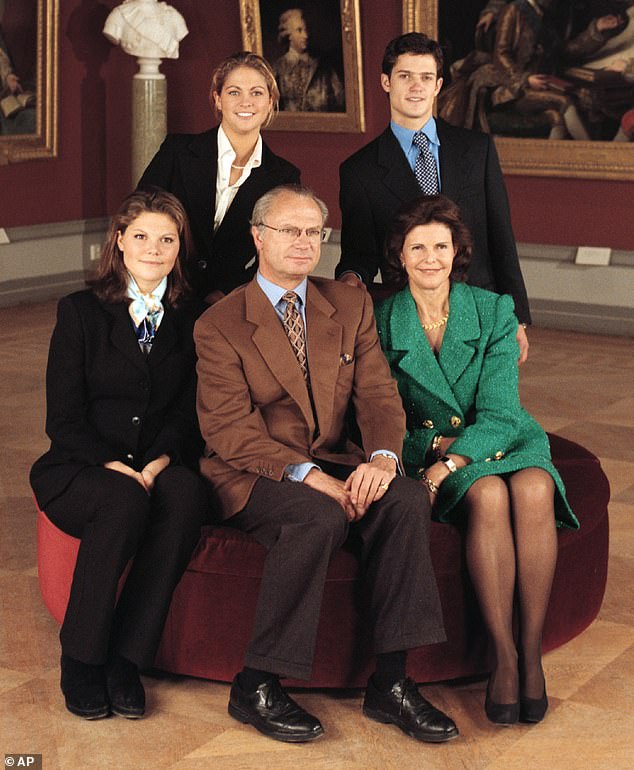 The new portrait of the King, taken by Thron Ullberg, will appear on stamps being issued in Sweden in 2023.

Throughout the year, the country’s Royal Family will host a number of events to celebrate the King’s Golden Jubilee.

The first festivity will take place later this month when King Carl and his wife of 47 years Queen Silvia hosts a dinner at the Royal Palace in Stockholm for Sweden’s governors.

Seen as a progressive monarch, King Carl insisted Swedish law be changed in 1979 to allow his eldest daughter to succeed him rather than his only son – with the UK following suit in 2011. 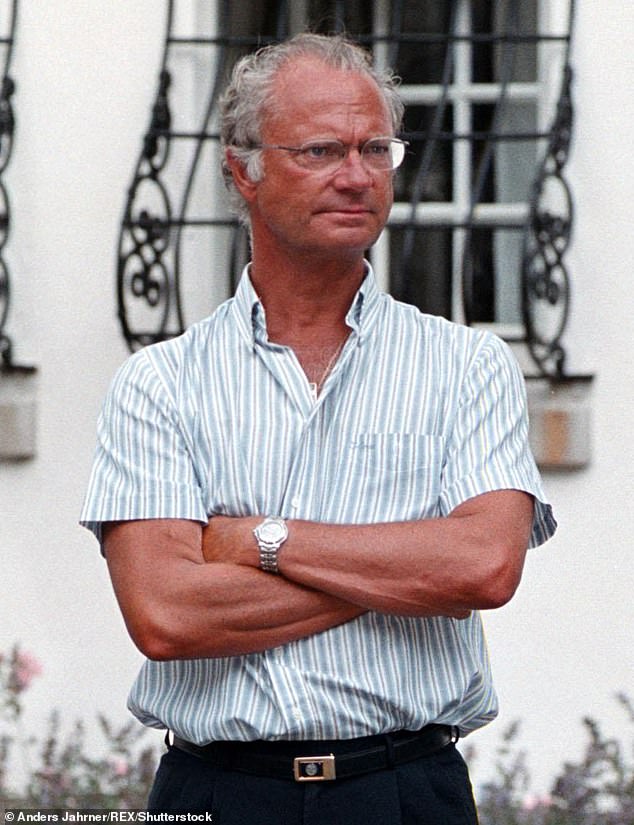 For years, King Carl XVI Gustaf of Sweden’s (pictured in the ’90s) only acknowledgement of a racier world was the stable of fast cars he enjoyed driving – while his 47-year marriage to Queen Silvia was credited as a wonderful example of partnership 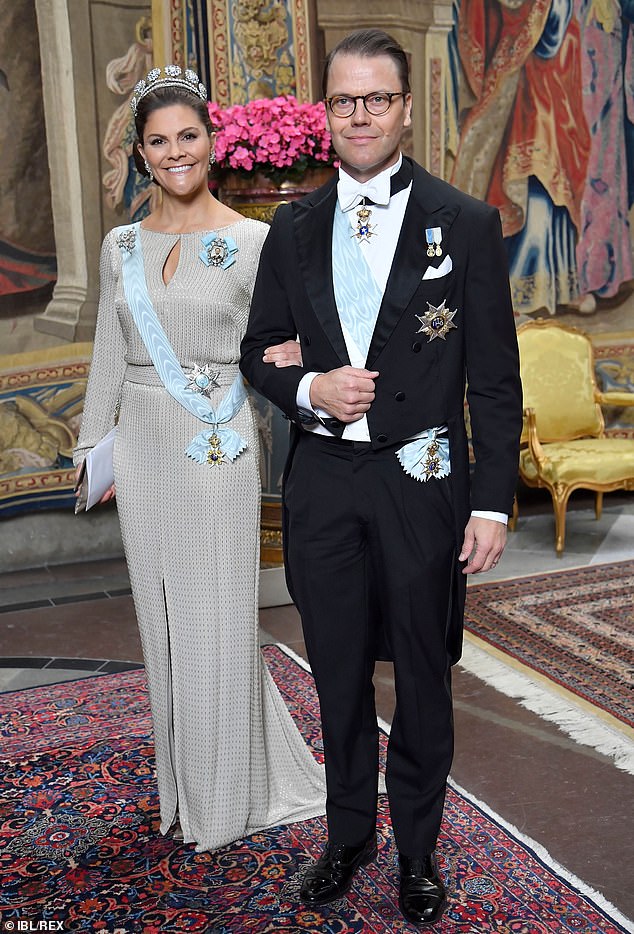 King Carl and Queen Silvia’s eldest child, Princess Victoria (pictured with her husband in 2019), is the heir to the throne, rather than her younger brother Prince Carl Philip, because of a change in the law insisted on by their father, which enables the ­eldest to inherit, whatever their sex

Who are the Swedish royals?

Carl XVI Gustaf and his wife Silvia, the King and Queen of Sweden

At the age of 75 Carl is the longest reigning monarch in Swedish history, having took to the throne in 1973 .

He and his wife Queen Silvia, 77, a German-Brazilian former flight attendant, have three children: Victoria, 44, Carl, 42, and Madeleine, 39, and eight grandchildren, and have increasingly been handing responsibilities down to heir apparent, Crown Princess Victoria.

Victoria, 44, was not expected to take to the throne when she was born in 1977 but a change in the law of succession three years later changed that.

The Prince, who is dyslexic, accused the public of ‘bullying’ her at the time, but the duo went on to welcome Prince Alexander, in April 2016 and another little boy, Prince Gabriel, in August the following year.

Princess Madeleine, 39, broke off her engagement to a lawyer to marry a ‘commoner’, financier Christopher O’Neill, in 2013.

He declined a royal title when he married the princess so he was free to pursue his career and the couple live a relatively private life in the US with their children Leonore, Nicolas and Adrienne.

For years, King Carl’s only acknowledgement of a racier world was the stable of fast cars he enjoyed driving – while his 47-year marriage to Queen Silvia was credited as a wonderful example of partnership.

Yet in 2010 the Swedish monarchy was rocked by the release of a new biography about the King which shined a light on his ‘wild sex parties with strippers and lengthy affair with a singer’.

Titled The Reluctant Monarch, it accused King Carl of attending underground strip clubs with his friends and having an extramarital affair.

In 2021, the author of the controversial book, Thomas Sjöberg, appeared on the podcast, Motive, to explore with the documentary series creator, Nils Bergman, the ‘royal scandal’.

Following the biography’s original release, King Carl offered a ‘vague’ statement, saying he and his family had chosen to ‘turn the page… and move forward because, as I understand, these are things that happened a long time ago.’

The controversial book revealed that the king and his friends had enjoyed the company of ‘coffee girls’ – women who would ‘entertain’ the group, consisting of members of the remains of Swedish aristocracy.

It also alleged that the king visited underground strip clubs, and that he had been involved in an extramarital affair with a famous Swedish singer in the 90s.

In the biography, the three ­investigative authors claimed the King had ‘wild sex parties involving strippers’, sometimes hosted by an infamous Mafia boss in a Stockholm club.

It was also ­alleged that, over many years, he had been protected by the Swedish secret service, Sapo, covering up embarrassing material in his wake and ­pressuring women to hand over compromising pictures.

According to the late Mafia-linked club owner Mille Markovic, who was quoted in the book, he liked having the King as a customer because it minimised the possibility of police raids.

Following the publication of the book, Markovic claimed that he had compromising photographs of the king with naked women, taken at one of his sex clubs in the 1980s.

In the descriptions of the six-part podcast, available via the Acast+ subscription service, it is said that the King and his friends, the so-called ‘royal gang’, for a few years in the early ‘90s had a standing reservation on Mondays at the underground club owned by Markovic.

‘Young women and strippers have in an almost systematic way been called into these party nights to please this elite group of powerful men,’ read the synopsis of episode two, when translated from Swedish to English.

‘The men have promised the world, modelling jobs and careers in the entertainment industry, in exchange for providing what they want.’

Prince William and Princess of Wales have adopted the ‘Middleton parenting model’ and want George, Charlotte and Louis to see them as their ‘best friends’, expert claims