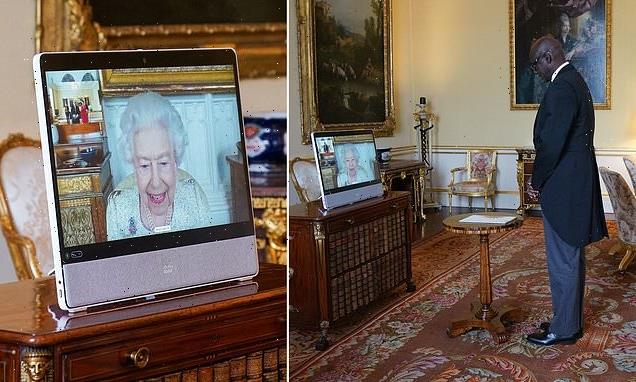 Keep Calm and Carry On ZOOMING: Queen holds virtual audiences with ambassadors of Rwanda and Malta from Windsor – two days after returning from holiday

Queen Elizabeth was in high spirits as she held a string of virtual meetings with diplomatic guests today, appearing at Buckingham Palace via videolink from Windsor.

The 96-year-old monarch, who returned from a week-long break at her Sandringham estate earlier this week, was seen smiling broadly in photos as she spoke to various guests through the screen.

Upon her return to work yesterday, she met the president of Switzerland, Ignazio Cassis, and his wife Paola, in her Oak Room sitting at Windsor Castle.

Royal observers noted that her Majesty appeared to be in good health and spirits, and was not using the walking stick she has seemingly relied on in recent times. 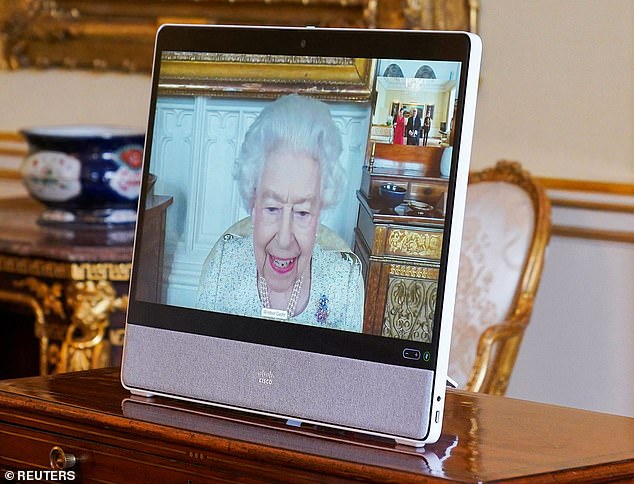 The 96-year-old monarch returned to work yesterday, following a week-long holiday at her Sandringham estate. Her in-person meeting yesterday was followed by video calls today 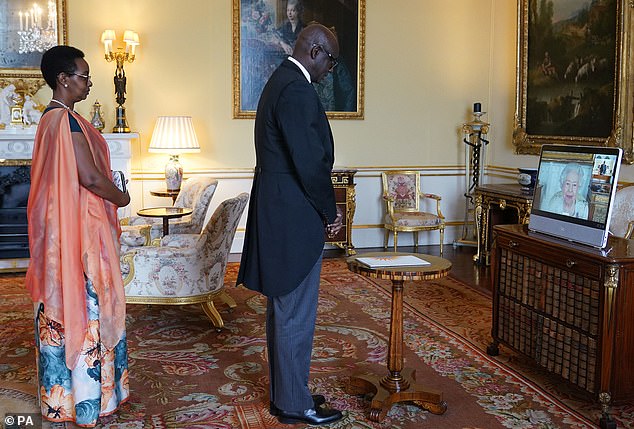 Among the guests the Queen met with virtually today were Johnston Busingye, High Commissioner for the Republic of Rwanda, (pictured, right) and his wife Phoebe Murerwa (left)

Through the screen, her Majesty appeared to be wearing a pale green lace dress and accessorised with a Cartier brooch, featuring two flowers, one made of pink sapphires and one made with blue sapphires both with diamond centres.

The floral-themed jewellery, which also features gold leaves and stem, was a birthday gift from her parents King George VI and Queen Elizabeth, in 1945.

Among the audience she received today were High Commissioner for the Republic of Malta Dr. Emmanuel Mallia and his wife Elena Codruta.

She also met with Johnston Busingye, High Commissioner for the Republic of Rwanda, and his wife Phoebe Murerwa. 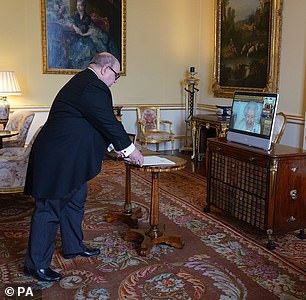 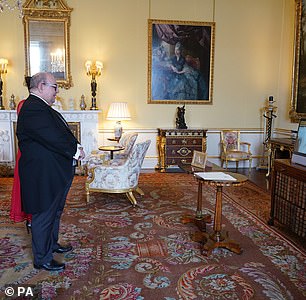 Among the audience the Queen received today were High Commissioner for the Republic of Malta Dr. Emmanuel Mallia and his wife Elena Codrute 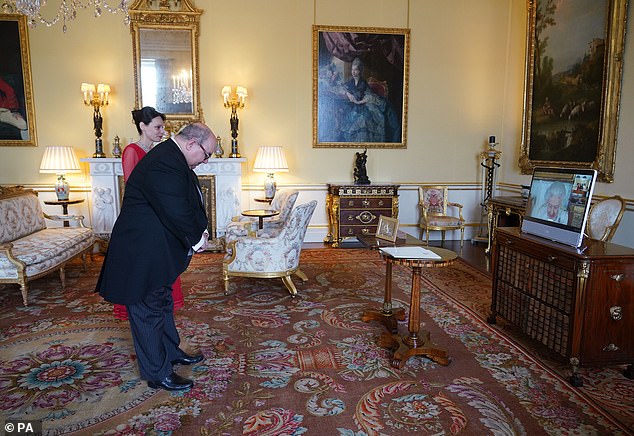 While the ambassadors arrived at Buckingham Palace for the engagement, the Queen appeared virtually from Windsor (right)

Her Majesty flew back to Windsor Castle in a Sikorsky S-76C helicopter with The Queen’s Helicopter Flight team from the Royal Household on Wednesday, after spending time away at her Norfolk retreat where she celebrated turning 96 last Thursday.

Yesterday, the monarch returned to work and smiled broadly as she posed for photographs with Ignazio Cassis and his wife Paola in her Oak Room sitting room.

The Queen stood without her walking stick and was dressed in a blue and grey paisley-style patterned silk dress.

She was wearing her fruit-themed sapphire and diamond grapes brooch, which features a sapphire bow and 16 small diamonds shaped like a bunch of grapes. It was inherited from the Queen Mother. 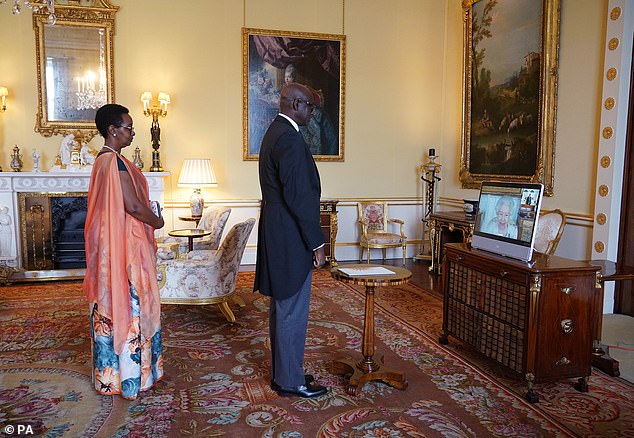 The Queen also met with Johnston Busingye, High Commissioner for the Republic of Rwanda, and his wife Phoebe Murerwa

There were no public engagements for her birthday, but there will be celebrations for her official birthday and Platinum Jubilee in June.

Buckingham Palace spokesman said she is hoping to attend the State Opening of Parliament in less than two weeks’ time, on May 10.

Royal aides said confirmation is expected closer to the time or on the day. The Queen, who has experienced mobility issues in recent months, has opened Parliament on all but two occasions during her reign. 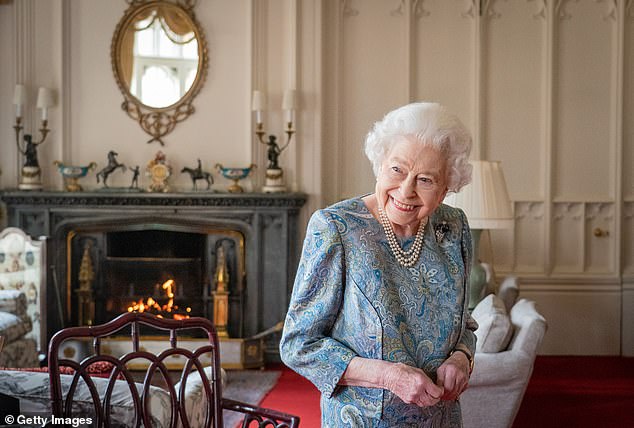 The Queen returned to work yesterday (pictured) following a week-long holiday at her Sandringham Estate. Onlookers noticed how well the 96-year-old monarch appeared