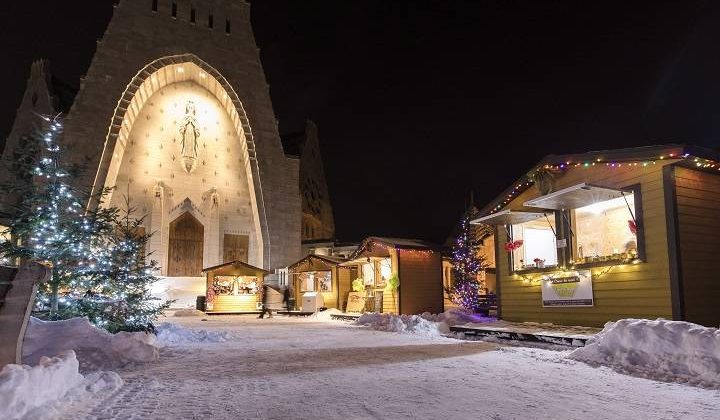 Standing on the shores of the St. Lawrence River halfway between Montreal and Quebec City, Our Lady of the Cape Shrine traces its history back more than three centuries.

Described as Canada’s national shrine to Mary, the mother of Jesus, it attracts more than 500,000 visitors annually and its traditional Christmas midnight mass is popular with pilgrims. But in recent years, it has branched out from the purely spiritual to add secular outdoor winter events, from pop music concerts and festive lights to a toy display and meat pie contest.

Catherine Dupaul, a spokeswoman for the Trois-Rivières shrine known in French as the Sanctuaire Notre-Dame-du-Cap, says the additions contribute to a real “Christmas magic.” They have attracted a broader range of tourists who come from farther afield. “We have a lot of people from Ontario who come to visit us during the holidays,” she said in a recent interview.

Efforts to attract more winter visitors began 16 years ago. An outdoor Christmas market selling foods and crafts, held on a mid-December weekend, drew more than 13,000 visitors over two days this year. The market tripled in size to 125 kiosks from 40 last year.

In addition to concerts of traditional Christmas music, popular Quebec recording artists play their hits inside the basilica. Dupaul said there are a lot more activities for families with children this year. “We added a zone that includes an outdoor cinema, illuminated games and an obstacle course,” she said.

One of the shrine’s main holiday attractions is “Christmas in Light” — an outdoor display of colourful lights that runs through Jan. 6. A number of outdoor and indoor shows are also being held, including the “Crèche Vivante”, in which actors silently portray the Nativity scene.

Another addition this year was a contest to see who could bake the best tourtière, a Quebec meat pie traditionally served around Christmas.

“There’s a big debate in Quebec between what’s known as the Lac-St-Jean tourtière and those with just a ground-meat filling,” Dupaul said. “We Quebecers tease each other about them.” The Lac-St-Jean variety includes cubes of beef and pork, onions and potatoes, while other tourtières are made with ground pork, beef and other meats.

This year’s winner of the “My Best Tourtière” competition was Chantal Fleurant, a local hospital worker, who would not disclose the ingredients in her winning dish.

There is a $5 entrance fee for all activities, but access will be free on Dec. 24 and Christmas Day. Children 12 and under get in free.

Dupaul said visitors also learn about the shrine’s history, which started with a small wooden structure built in 1659. A second church, known as the Old Shrine, was built in 1714 and is described as the oldest stone church in Canada in which mass is celebrated daily.

A third church was built in the 19th century thanks to what is known as the “miracle of the ice bridge.” The building materials required for the new church were to be brought across the frozen St. Lawrence, but 1879 happened to be one of the rare winters when the river did not freeze over.

Parishioners prayed all winter, and in mid-March pieces of ice floated down the river. People poured water on the ice to create a solid two-kilometre path, according to an account on the shrine’s website. It stayed for a week — long enough for the necessary stones to be hauled over on horse-drawn sleds — even though the river remained open on either side.

Another miracle is said to have happened in 1888, when a disabled man came to pray and asked two priests to help him into the church. As the three men were praying together, the eyes on a statue of Mary opened, according to one of the priests, who said the eyes stayed open for about 10 minutes.

Today, a large basilica with stained-glass windows greets the faithful. Construction began in 1955, and it was inaugurated in 1964. The cross atop its towering dome rises 78 metres above the ground. The basilica’s Casavant organ, with more than 5,000 pipes, is one of the largest in Canada. In September 1984, a crowd estimated at 75,000 welcomed Pope John Paul II to the shrine.