An independent review of a $33 million land deal criticised by the Auditor-General has cleared the Department of Infrastructure of integrity problems or criminal activity and says there is no evidence any public servants personally benefited from the transaction.

The review by consultant Mark Harrison of Sententia wasn’t asked to examine whether the 2018 deal to buy the land near Western Sydney Airport, dubbed the Leppington Triangle, was value for money. 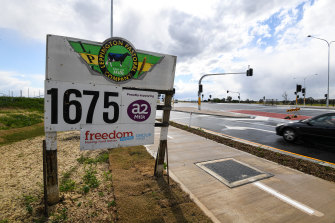 The Commonwealth bought a parcel of land owned by the Leppington Pastoral Company for nearly $33 million in 2018.Credit:Peter Rae

It says there were weaknesses in the process and it was clear the department didn’t take all reasonable steps to determine what a suitable cost would be.

“While there is no question that the likely future benefit from the acquisition is significant, it has come at a high reputational cost to the department,” the report, tabled in Parliament on Monday, notes.

Mr Harrison was asked to re-examine the land deal after a damning audit report that found the Commonwealth paid $30 million plus GST for the piece of land that was later valued at just $3 million. His was one of four independent reviews commissioned.

The report found no evidence of poor integrity, criminal activity or personal benefit to the officers involved that swayed their decisions.

The Auditor-General referred the deal to the Australian Federal Police last July out of concern “the Commonwealth may have been defrauded”. One of the officers is also under investigation for potential breaches of the public service code of conduct relating to the deal.

Mr Harrison said the public servants who ran the deal had no specific experience in land acquisition and the process they went through seemed to be “heavily focused” on keeping the dairy farm owners, Leppington Pastoral Company, happy.

He found the department could have offered Leppington a lower price but there was no guarantee the company, owned by brothers Tony and Ron Perich, would have accepted.

However, he said even if the problems had been addressed, it “would not have allowed the Commonwealth to acquire the land for $3 million”, a price based solely on its value as agricultural land.

“Delayed acquisition, compulsory acquisition and a more confrontational approach to the landowner may have resulted in different financial outcomes, which may have been better or worse than what was achieved,” the report said.

The Auditor-General found briefings sent to senior staff in the department and the minister left out key information, including price comparisons with other valuations for land in the area or the detail that the NSW government was paying much less per hectare for its portion of the same land.

Mr Harrison’s review said there was no “check and challenge” from decision-makers and there was turnover in senior leadership that could have meant things slipped through the cracks.