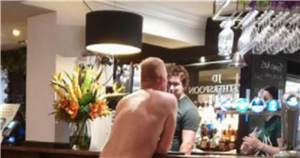 Brits were shocked yesterday after a Reddit user spotted a completely naked man at the pub.

The unlucky punter took a snap of the bizarre sight and uploaded it to the CasualUK forum, where thousands liked and commented.

They claimed: “Wetherspoons on a Tuesday night NSFW (Not Safe For Work).”

In the photo two bar workers stood behind the counter of the pub while on the other side a man stood casually leaning on the wooden bar.

Unfortunately for the bloke he seemed to have forgotten his clothes as he wore no shoes, shirt and him bum was completely on show!

Over 10,000 people liked the comical snap and almost 700 had something to say in the comments.

One person joked: “If he's paying cash – where's that fiver been?”

While another responded: “Imagine having bare feet on those floors though…”

"This is actually like one of those dreams where you're doing something mundane like going to work or the pub, but it's really stressful because you're starkers the entire time,” laughed another.

While a fourth said: “The bartenders face is god damn priceless.”

“He's broke the one clothing rule they have at Wetherspoons,” added another. “Customers ‘must remain fully clothed’ and ‘wear shoes’.”

Hilariously, a poster claiming to be the barman in the snap added: “I'm the guy behind the bar. This is not the weirdest thing I've seen working at Spoons.”

And, it looks like he’s not alone as other commenters shared the oddest things they’d spotted in the pub chain.

One noted: “As a teenager I remember seeing a group of Smurfs trying to get in to our local Spoons.

“Some sort of disagreement happened and then a royal rumble started between the Smurfs and two door staff.”

While another noted: “Watched someone eat another person's puke in a spoons beer garden.”

What’s the weirdest thing you’ve ever seen happen in a pub? Tell us in the comments…

For more lifestyle stories, sign up to our free Hot Topics newsletter here.