Given he’s worked in more than 100 countries and it’s a core part of his job, it’s surprising to learn Eric Campbell is not a good traveller.

The stalwart of the ABC’s Foreign Correspondent disagrees that jet lag is worse coming home to Australia – it’s worse going both ways, he says wryly. 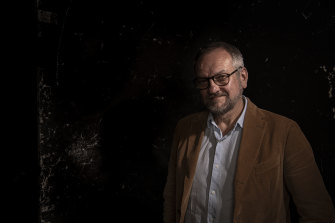 Campbell has done things most of us can hardly imagine, from travelling with the Indigenous Russian Nentsy people – across the tundra at -20 degrees, herding reindeer, sleeping in reindeer skin tents, eating reindeer and drinking reindeer blood – to evading the Chinese coastguard in the South China Sea in search of an old, sunken navy ship.

Much of it has been documented on Foreign Correspondent, which celebrates its 30th anniversary next week.

The 62-year-old says the show is unique: “Our brief is to take people on a journey to meet characters they would never otherwise meet. And that’s it – we have no brief beyond that. 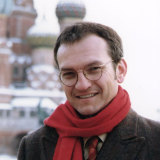 “I can’t really think of [other shows] doing something the same as we’re doing because all around the world the big media news outlets have faced the same problem as we do, with television audiences declining, and have had to cut their budgets accordingly. There’s just not the in-depth focus on international affairs that there was even 20 years ago,” he says.

When Foreign Correspondent started, Campbell says, it was a very different world, a time of great optimism. “Despite the fact there was this horrendous war raging in the former Yugoslavia. The Soviet Union had broken up relatively peacefully, China was not the threat that it’s become today, climate change was a background issue, Osama bin Laden was just some rando.”

Now, he says, the Cold War is back on again and China is becoming the dominant force in our region – “a very aggressive, military one”.

“And climate change, of course, threatens to make all that seem small-scale in the horrors that are coming. History has turned with a vengeance.”

Campbell was the ABC’s Moscow correspondent from 1996 to 2000, covering the former Soviet Union and the conflicts in Afghanistan and Kosovo, and from 2001 to 2003 he was based in Beijing covering China, Afghanistan and Central Asia.

His biggest regret is going to Iraq, where in 2003 cameraman Paul Moran was killed by a suicide bomber while they were on assignment. At that point, Campbell was strongly advised not go back into an active war zone.

“I’ve been threatened, I’ve been tear-gassed but I haven’t engaged in the lottery of … being involved at the front line of a conflict,” he says. “I’ve been dealing with PTSD for nearly 30 years; I think most correspondents are the same. Fortunately now we seek help and don’t self-medicate with alcohol like the previous generation did.”

That said, he adds: “It’s a fairly permanent condition, it never leaves you.”

Russia is something of an obsession for the veteran reporter. “It was my first posting and it was the one that got under my skin,” he says. “I’ve gone back there as often as I can to do stories, whenever I can get visas basically.”

Even so, Campbell did not expect what has happened in Ukraine. He was first posted to Moscow in 1996, during president Boris Yeltsin’s second term. “It was obvious that democracy was failing and corruption was taking over everything,” Campbell says. “There was a massive disillusionment in the public, but there was still a sense that things would get better, that there could be a different path from the grey Soviet era and that the Cold War was not going to start again.” 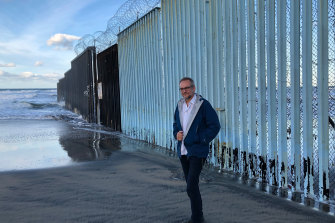 Campbell at the US/Mexican border.

Fast-forward to February this year, when all that changed. “Right up until the day of the invasion I felt – along with every Russian journalist I know – that it wasn’t going to happen like this. We were all still holding on to this wishful thinking that things would work out all right.

“I think what has happened since then has fundamentally changed Russia, its place in the world, the prospects of peace, the prospects of engagement. Until Putin dies and unless he’s replaced by someone less appalling, I think we’ve entered a very dark chapter in history.”

Last month Campbell was placed on Russia’s sanctions list, which means he has little chance of returning to Russia any time soon. It was surprising to him, as historically authorities hadn’t cared what stories he’d worked on. “I was never getting critical feedback from the embassy or anything … unlike China, where they watch you like a hawk. But I think the Russian Foreign Ministry has gone from a role of serving the state to being a tool of disinformation and an apologist for war crimes.

There was never any question about what Campbell would do careerwise: for as long as he can remember, it was his ambition to be a foreign correspondent. He started as a cadet at the Sydney Sun (“a not-so-lamented fish wrapper that disappeared many years ago”) before moving on to The Sydney Morning Herald. From there, the ABC – and his dream job – beckoned. “It took me a long time,” he says. “I was 35 when I first went overseas with the ABC, a long time ago. But it was much easier back then to do it, these days the options are a lot more limited.”

While it’s hard to imagine Campbell slowing down, he intends to do fewer trips and hopes to mentor young journalists interested in becoming foreign correspondents. “I’ll keep doing this till I drop hopefully, but it does get to a point where it’s a bit ridiculous hauling my old arse around the world.”

Having seen some of the darkest elements of human nature, I wonder how Campbell makes sense of the world. “It leaves you with no trust in governments but enormous faith in ordinary people. As horrible as it is to see the suffering that happens from these crises, it’s always genuinely uplifting to see how the human spirit can rise up against it.