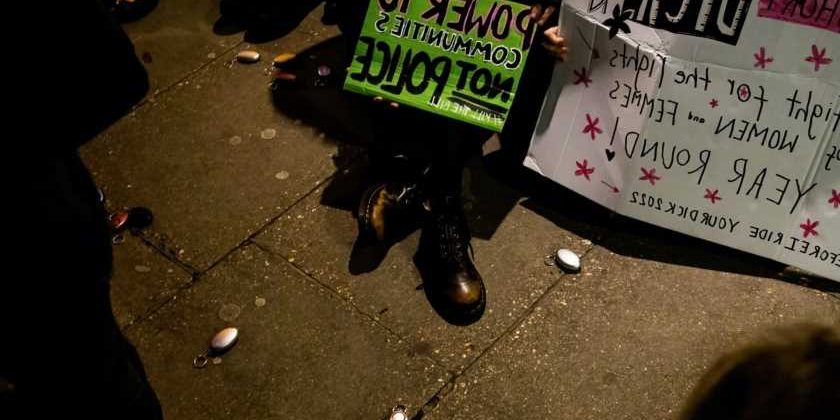 The demonstration – which was led by the feminist action group Sisters Uncut – took place outside London’s Charing Cross police station.

Protestors led by the feminist action group Sisters Uncut set off 1,000 rape alarms outside Charing Cross police station last night to mark the one-year anniversary of the infamous Clapham Common vigil for Sarah Everard which was broken up by police.

One of the central figures at the demonstration was Patsy Stevenson – the young woman who became the face of the events at last year’s vigil after a photo of her arrest went viral.

Addressing the crowd, she said she was “arrested on the floor for putting down a candle” and said “shame on you” to police officers present at the protest.

The demonstration – which saw protestors march from Scotland Yard to the police station in London’s West End – also aimed to shine a light on the revelations unveiled by an IOPC report into police behaviour at Charing Cross earlier this year, which found that 14 police officers had sent racist, sexist and homophobic messages.

The messages – which were outlined in the report – were highly sexualised, discriminatory or referred to violence, which officers often defended as ‘banter’.

In a statement released at the time, the Metropolitan Police called the behaviour “reprehensible”, and apologised to Londoners for the officers’ “appalling conduct”.

Last night’s protest comes just days after judges ruled that the Met police breached the rights of the organisers of the original Sarah Everard vigil – the women’s safety group Reclaim These Streets – after they were told they could face fines and possible prosecution if the event went ahead due to lockdown restrictions at the time.

The group went on to cancel the planned event – but hundreds of people attended an unofficial gathering anyway, leading to a confrontation between police and protestors.

Responding to the news on Twitter earlier this week, Reclaim These Streets wrote: “Last March, women’s voices were silenced.

“Today’s judgment conclusively shows that the police were wrong to silence us. The decisions and actions by the Met Police in the run-up to the planned vigil for Sarah Everard last year were unlawful, and the judgment sets a powerful precedent for protest rights.”

It continued: “We feel vindicated by today’s judgment. This case exposes the Metropolitan Police’s total disregard for women’s human rights to assembly and expression.”