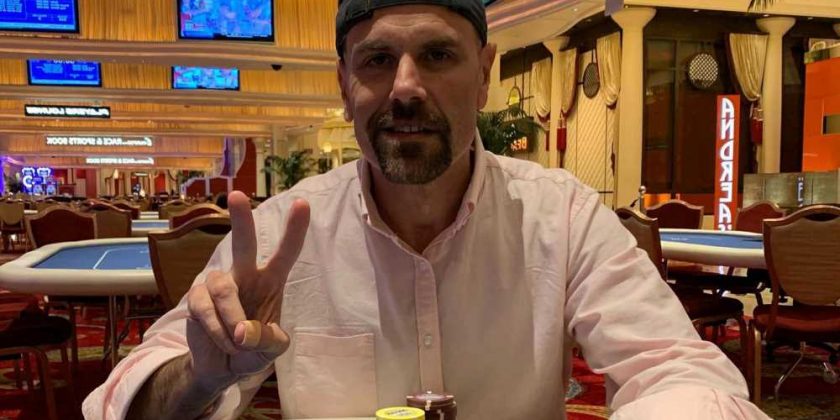 Poker pro Scott Robbins might have just been a joker.

An employee at the Borgata Hotel Casino & Spa may have feared he actually was a suicide king.

Now, a court will decide whether a $1.25 million settlement is in the cards.

Last September, as Robbins checked into the Atlantic City spot ahead of a poker tournament scheduled to take place there, the check-in clerk asked him if he preferred a high floor or a low floor. According to the suit, Robbins responded with a question of his own: “If I had to jump from a high-floor window, would I make it?”

The clerk supposedly implored him not to do that and, as per the suit, Robbins — who resides in Massachusetts — also asked if he would survive a leap from a lower floor. Both times, according to the suit, Robbins assured the clerk that he would not do it. In the end, the clerk gave the poker pro a 30th-floor room. Soon after he checked in, though, there was a knock on the door — and it wasn’t room service.

As stated in the suit, it was “an armed security force” telling him that he would need a psychological evaluation if he wanted to remain at the hotel. An ambulance allegedly whisked him to the AtlantiCare Regional Medical Center, where a shrink is said to have confirmed in writing that Robbins is “not a danger to himself or anyone else at this time.”

The first tournament card had yet to be dealt and, upon returning to the Borgata, Robbins was already in the hole for nearly $2,000 in transport and medical costs.

But the real bad beat was yet to come: Robbins’ belongings were reportedly removed from the room, the Borgata slapped him with a ban for life and security escorted him from the property.

In response to a request for a statement from The Post, a representative for the hotel said: “As you may be aware, Borgata does not comment on matters in litigation.”

Robbins maintains in the suit that the kibosh will cost him $85,000 per year in poker winnings over a 10-year period, plus $200,000 in sponsorships. He also wants another $200,000 for false imprisonment, interference with prospective economic gain and libel.

As for the bit about high floors versus low floors and death, Robbins claims in court documents to have been making the comment in terms of a fire or earthquake. Besides, his suit added, the windows are “over an inch thick and do not open.”

That said, Eric “Road Dawg” Zaun, a professional volleyball player, apparently jumped to an ugly death out of his 29th-floor window at the Borgata in June 2019.