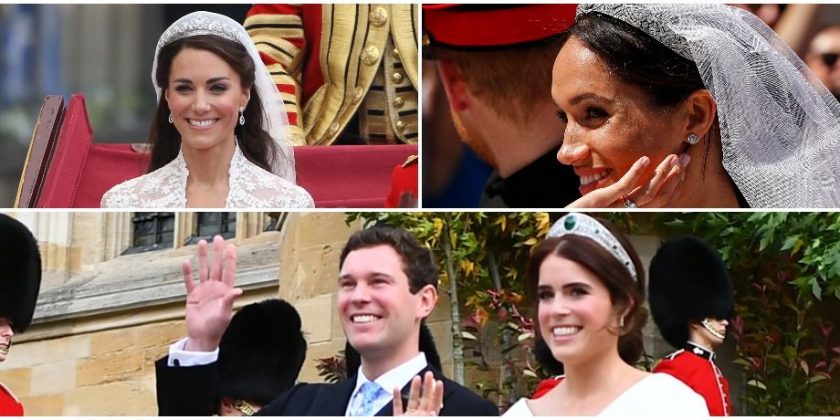 Princess Eugenie has left Kate Middleton and Meghan Markle in the dust with this royal wedding accessory, reportedly worth more than $12 million!

The latest generation of royal women have raised the bar when it comes to lavish weddings, but it was Eugenie who quietly stole the show by wearing a tiara on the day of her wedding to Jack Brooksbank, which was worth more than Markle and Middleton’s combined.

The British publication Express spoke to Deborah Papas, a gemologist and jewelry expert who weighed in on the estimated cost of the three stunning headpieces.

Meghan Markle’s tiara had an estimated worth of £2 million, which is equal to $2.5 million in United States currency.

Papas noted that it was likely very exciting for Markle to wear a tiara that was borrowed from Queen Elizabeth for her wedding to Prince Harry, as one of the few American women to marry into the British royal family back in May of 2018.

Papas described the piece to Express as a “stunning bandeau peppered with diamonds and set in platinum, the noblest of all metals. The center section was originally a wedding gift from the County of Lincoln to Queen Mary in 1893 and is a pendant/brooch which I believe can be cleverly detached and worn as such.”

She also commented on the center diamond which was estimated to be 10 carats or more, surrounded by nine smaller, brilliant-cut diamonds at two to three carats each.

Markle’s wedding tiara was originally made for Queen Mary, the queen’s grandmother, in 1932 and bequeathed to her granddaughter on her death in 1953, per Express.

On her 2011 wedding day to Prince William, Kate Middleton wore a surprisingly modest tiara according to royal standards, remarked Papas.

She added to the publication that the tiara was made by Cartier for the Duke of York to give to his wife just before he became King George VI in 1936. The Queen Mother gave it to her daughter, at the time, Princess Elizabeth for her 18th birthday present in 1944.

The rarely-seen piece was only worn a handful of times by both the late Queen Mother and Queen Elizabeth, who preferred more lavish pieces for formal events.

The royal who made the most impressive statement with her choice of a crown was Princess Eugenie, the daughter of Prince Andrew and Sarah Ferguson, on her wedding to Jack Brooksbank in October of 2018.

Princess Eugenie wore a true statement tiara to go with her understated but elegant wedding gown, an impressive 93.70-carat cabochon Emerald Tiara, which was hand made by Boucheron in 1919, per the Express report.

Papas remarked of the stunning headwear, “[i]n keeping with the fashion of the time, this tiara was designed in the Russian headdress style, made of finely pierced platinum, which was kept delicately simple, although intricate in detail, to show off the main stone.”

Eugenie’s tiara was owned first by the Queen Mother, and then her grandmother the queen. It is estimated, per Papas, to be worth over $12 million dollars.