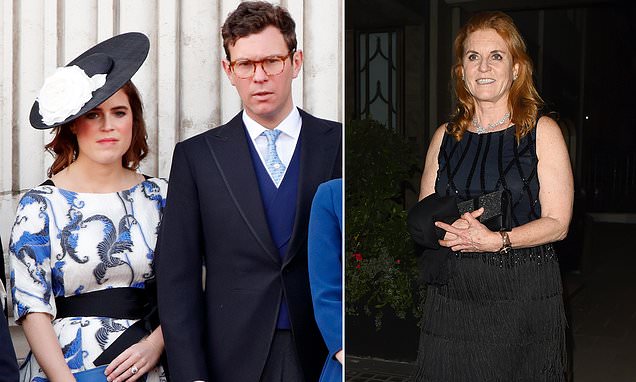 Sarah Ferguson has confirmed that Princess Eugenie is not pregnant, in a video taken at a party this weekend.

The Duchess of York, 59, addressed the rumours regarding her daughter Eugenie, 29, which started soon after the royal wed alcohol merchant Jack Brooksbank, 33, at Windsor Castle last October.

During a gathering at American millionaire businessman Ernie Boch Jr’s house in Norwood, Massachusetts on Saturday night, Fergie made the speech in a video taken by American journalist and guest Kelly Lynch.

Speaking about Eugenie, Fergie touched on her scoliosis, before joking about Jack and addressing the pregnancy rumours. 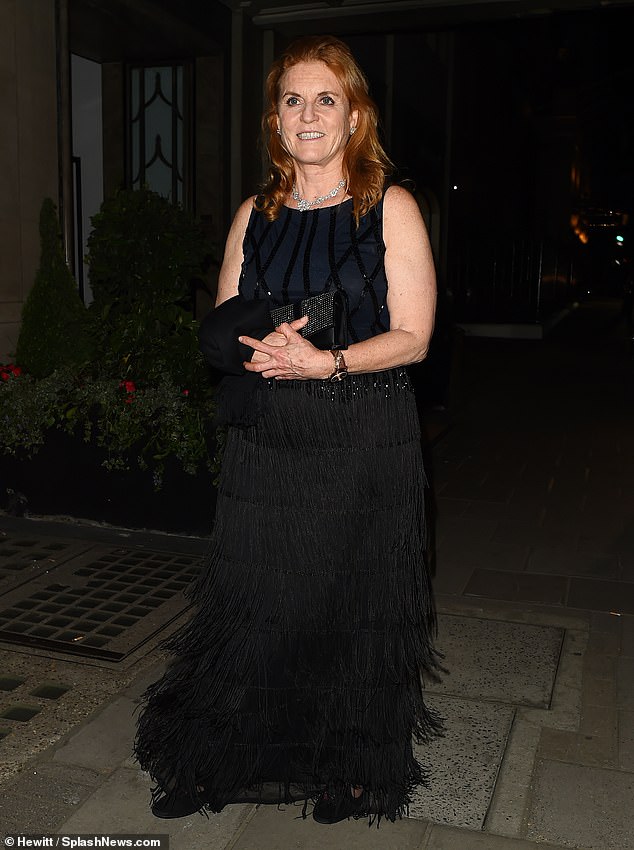 During a gathering at American businessman Ernie Boch Jr’s house in Norwood, Massachusetts on Saturday night, Sarah Ferguson made the speech in a video taken by American journalist and guest Kelly Lynch, confirming that Eugenie is not pregnant. Fergie is pictured in London this year

‘It makes me even more of a yummy mummy because I just drink the tequila when I go and sell it.’

Speaking about Eugenie, the Duchess continued: ‘What else can I tell you? No, she’s not pregnant!’. 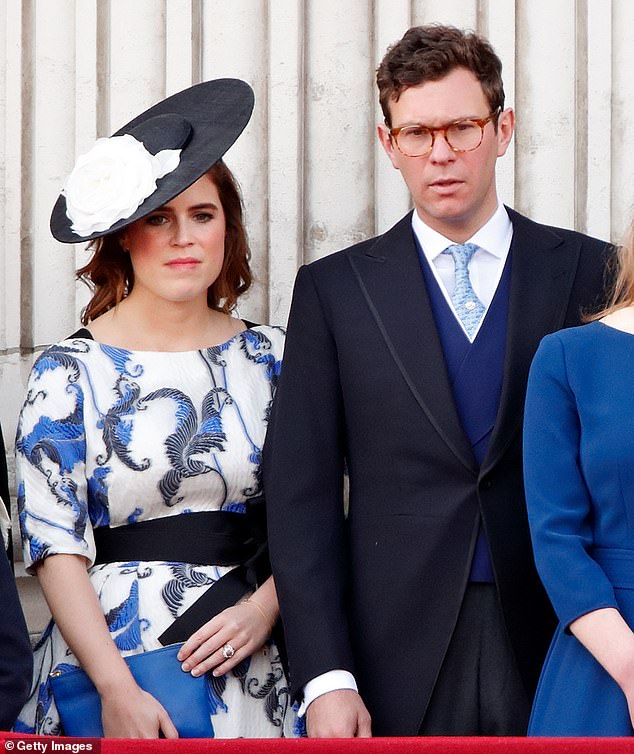 Fergie, 59, addressed the rumours regarding her daughter Eugenie, 29, which started soon after the royal wed alcohol merchant Jack Brooksbank, 33, at Windsor Castle last October. Eugenie is seen at Buckingham Palace in June, with Jack 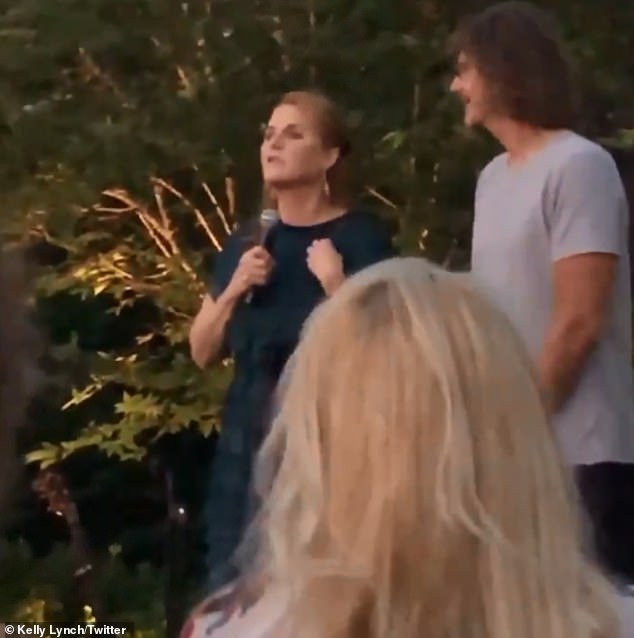 Speaking about Eugenie, Fergie touched on Eugenie’s scoliosis, before joking about Jack and touching on the pregnancy rumours, pictured with Ernie Boch

Rumours speculating that Eugenie could be pregnant started swirling when Eugenie took to Instagram to wish Jack a happy birthday in May.

Followers quickly commented on whether a baby announcement was to follow, with one asking: ‘Time for the Brooksbanks to have baby? God bless you both.’

Another added: ‘Beautiful ladies we are waiting for you baby news announcement soon!’. 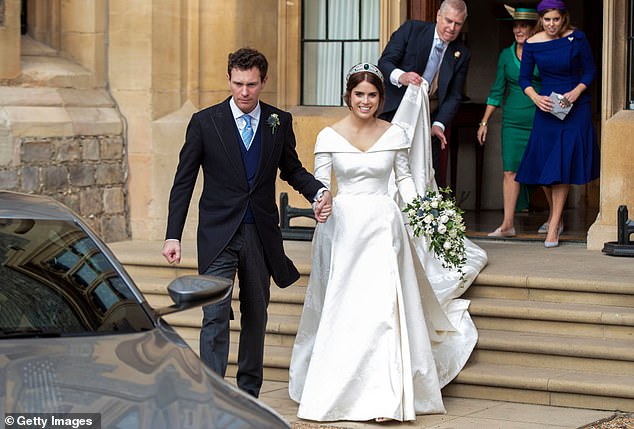 Jack and Eugenie started dating in 2011, before marrying in a lavish ceremony at Windsor Castle

Jack and Eugenie started dating in 2011, before marrying in a lavish ceremony in 2018 at Windsor Castle.

A the nuptials, Eugenie wore a low-back gown to display her scoliosis scar.

Eugenie was diagnosed with scoliosis and underwent corrective surgery aged just 12, with a pair of eight-inch titanium rods inserted alongside her spine to rebuild it as a result of a curvature.

The operation resulted in a prominent scar, which Eugenie wore with pride, opting for a backless gown for her nuptials at Windsor Castle.

In an interview before the wedding, the Princess, 28, said: ‘I think you can change the way beauty is, and you can show people your scars and I think it’s really special to stand up for that.’

The doctor who performed her surgery was even in attendance at the ceremony, invited by Eugenie. 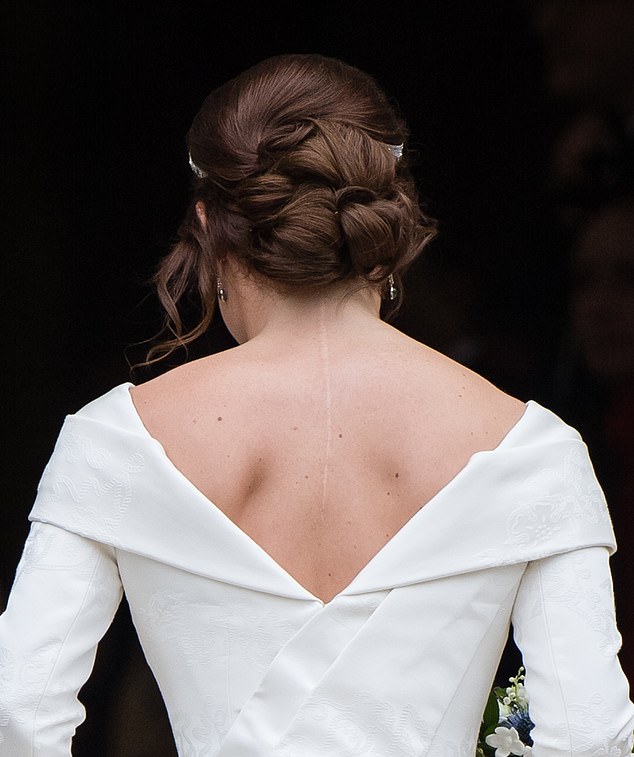 Princess Eugenie got married herself last October, seen arriving at St George’s Chapel in Windsor Castle ahead of her wedding with Jack Brooksbank, showing her scar off proudly