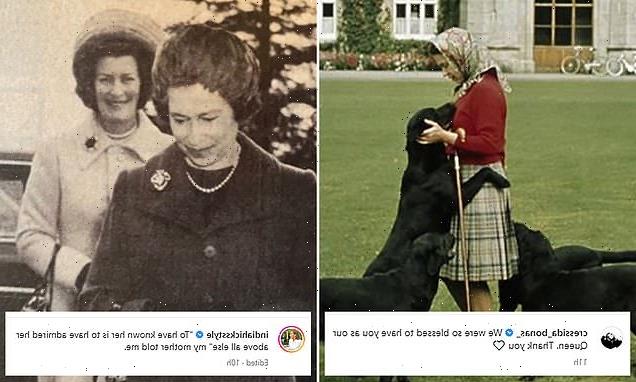 High society mourns the death of the Queen: Prince Charles’ goddaughter India Hicks says ‘to have known her is to have admired her’ – as Prince Harry’s ex Cressida Bonas and Diana’s brother Charles Spencer share tributes

India, who posted a number of personal photographs of her family with the Queen, wrote: ‘”To have known her is to have admired her,” my mother told me.’

Meanwhile Earl Spencer, 57, who lives at his family seat, Althorp House, in the Northamptonshire countryside, tweeted a snap of the Queen following the announcement of her death, having previously reposted a pray for the monarch’s health.

A host of other socialites went on to share tributes to the monarch, including Prince Harry’s ex-girlfriend Cressida Bonas, who is believed to have met the Queen when she visited Balmoral with Harry in 2014. 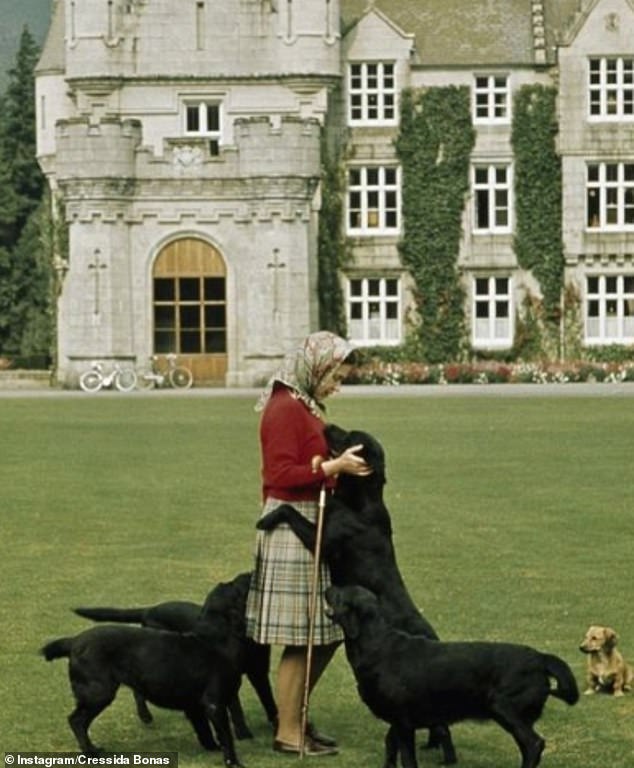 She posted a snap of the royal in the grounds of her Scottish estate, writing: ‘We were so blessed to have you as our Queen. Thank you.’

Princess Olympia of Greece, who grew up in Chelsea and is another of Prince Charles’ goddaughter, also shared a tribute online.

Alongside a photograph of the Queen laughing with Prince Philip, she wrote: ‘Our beautiful Queen.’

The Duchess of Rutland shared a statement on behalf of her and her family, the Manners sisters, who went on to post it. 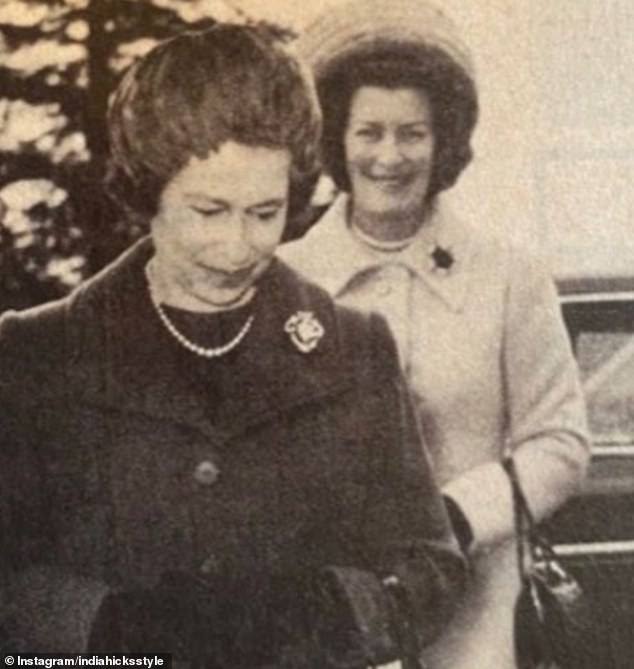 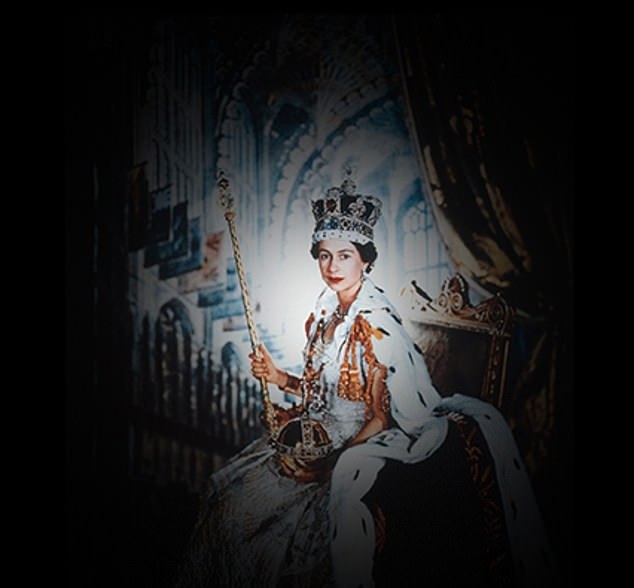 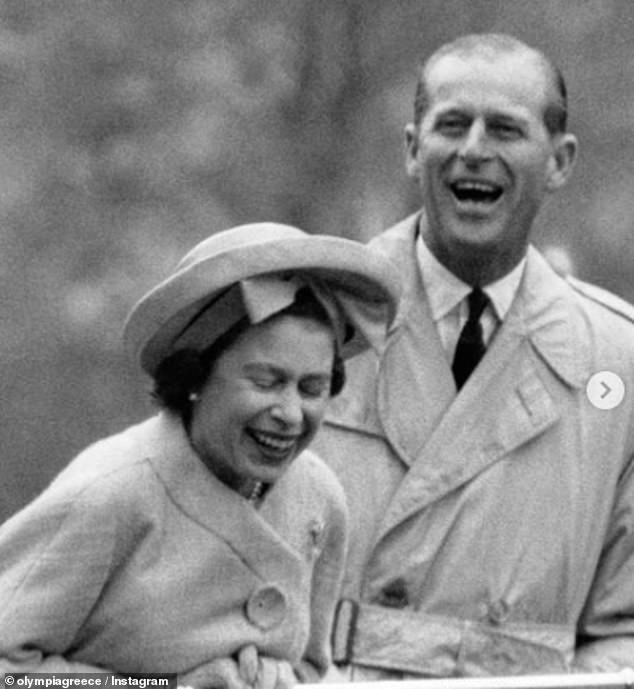 Meanwhile Princess Olympia of Greece posted a snap of the Queen and Prince Philip, calling the late monarch ‘beautiful

She shared a snap of the Queen from earlier this year, writing: ‘The Duke & Duchess of Rutland and family extend their deepest condolences to The Royal Family on the death of her Majesty Queen Elizabeth II.

‘The life of the late Queen was remarkable and the country owes her a great debt of gratitude for her service and duty to the United Kingdom and the Commonwealth.’

She finished by writing: ‘God Save The King.’

As well as resharing her mother’s post, Violet Manners went on to post a number of snaps of the Queen. 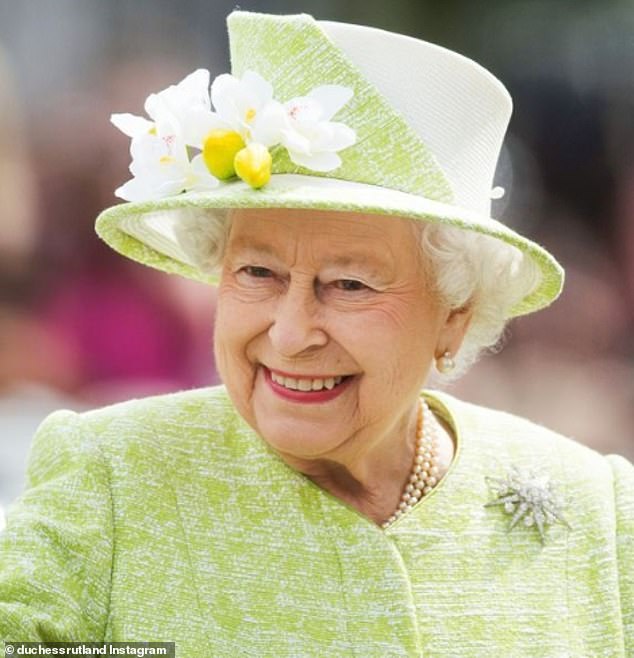 The Duchess of Rutland shared a statement on behalf of her and her family, the Manners sisters, who went on to repost it

She wrote; “I declare before you all that my whole life, whether it be long or short, shall be devoted to your service and the service of our great imperial family to which we all belong.” Queen Elizabeth II.’

The post continued: ‘That you did Your Majesty. I saw rain, sunshine and the most beautiful rainbow today and I had an inkling, along with the country it was you saluting us all goodbye.

‘What a constant you’ve been. I’m forever grateful to have lived through your reign. A remarkable example, Monarch and matriarch to us all.

‘Thank you for your service is all I can say, but it doesn’t sound as though it goes far enough in recognising all you accomplished, did and represented to your country and the 54 common wealth countries around the world. 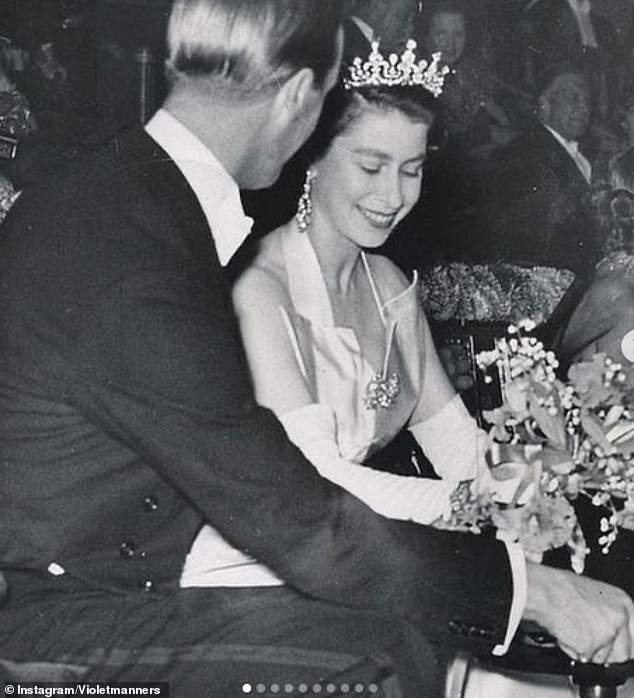 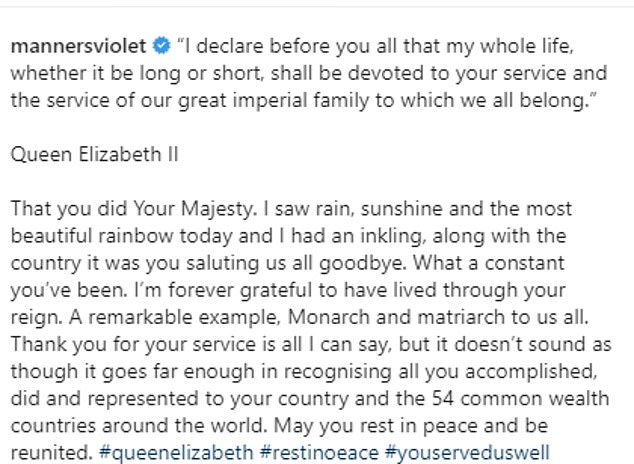 As well as resharing her mother’s post, Lady Violet Manners went on to post a number of snaps of the Queen

‘May you rest in peace and be reunited.’

Others to share brief tributes included Tatiana, who is the daughter of the Queen’s cousin the Marquess of Milford Haven, and Ella Mountbatten, Lord Ivar Mountbatten’s daughter.

Meanwhile the aristocratic beauty, Countess Alexandra Tolstoy, who descends from a long line of Russian nobility, shared a snap of the Queen, writing: ‘In loving memory of our dear, dear, Queen Elizabeth II.

Society hostess Alice Naylor-Leyland shared a post of the monarch, writing: ‘I am so deeply saddened by the passing of Her Majesty Queen Elizabeth ll. 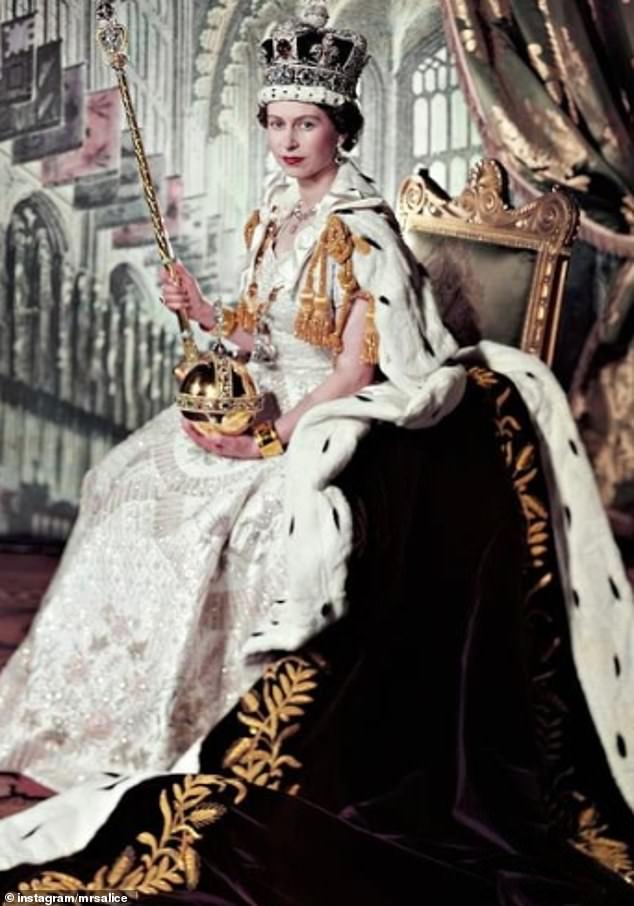 Society hostess Alice Naylor-Leyland shared a post of the monarch, writing the Queen was ‘all the country could have wished for and more’

‘She was everything our country could have wished for and more.

‘You were and still are a true inspiration to us all, not just today but forever more. Love Alice.’

Prince Andrew, Prince Edward, his wife Sophie, and Prince William all flew in from Berkshire via private jet to Aberdeen yesterday as they dashed to Balmoral to see her. But it is understood that they did not reach the estate before she passed.

Only her eldest children, Prince Charles and Princess Anne, who were already in Scotland at the time of the Monarch’s sudden turn for the worse, were able to make it to the royal estate before her death, sources said last night. 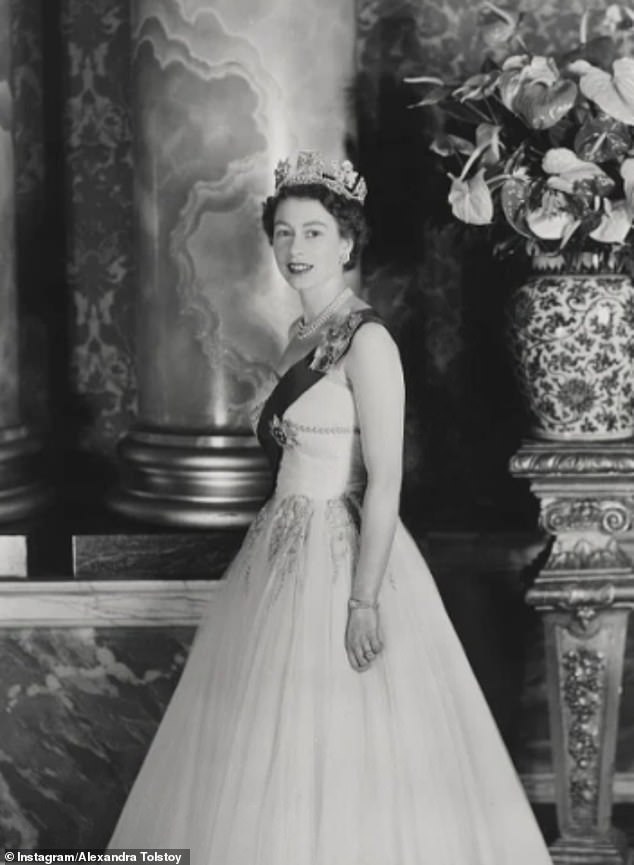 Meanwhile the aristocratic beauty, Countess Alexandra Tolstoy, who descends from a long line of Russian nobility, shared a snap of the Queen, writing: ‘In loving memory of our dear, dear, Queen Elizabeth II 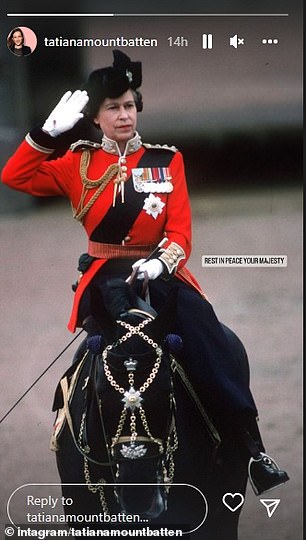 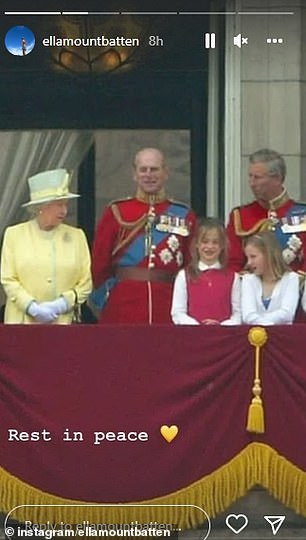 Others to share brief tributes included Tatiana, who is the daughter of the Queen’s cousin the Marquess of Milford Haven, and Ella Mountbatten, Lord Ivar Mountbatten’s daughter (left and right)

The Duchess of Cornwall and Cambridge remained in Windsor with her children, who had their first day at their new school.

Prince Harry, who was due to attend a charity event with wife Meghan in London last night, also attempted to reach Balmoral in time. But he arrived at 8pm, nearly an hour-and-a-half after the public were informed of the Queen’s death.

It comes as Britain is today mourning the death of its beloved Monarch, Queen Elizabeth II. After a remarkable 70 years on the throne, the country’s longest-reigning royal yesterday died ‘peacefully’, aged 96, at Balmoral in Scotland.

Her death sparked an immediate and huge outpouring of emotion, with thousands of heartbroken mourners gathering outside the gates of Buckingham Palace and other royal buildings yesterday evening.

At one point, a rendition of ‘God Save The Queen’ rang out among the mourners, followed by cheers of ‘Long Live The King’. 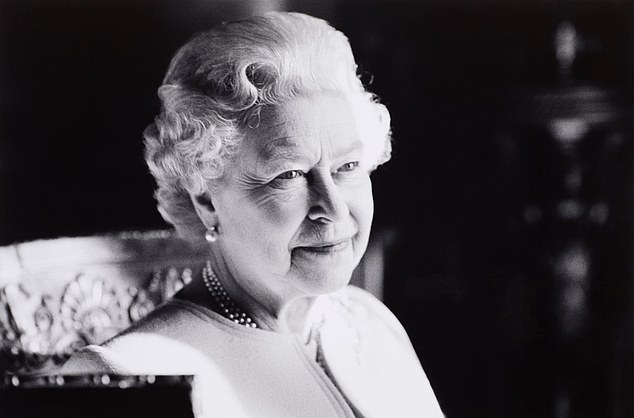 Others laid flowers outside Windsor Castle – where The Queen had spent much of her time following the death of her beloved husband, Prince Philip, in April last year.

And in a sign of the Queen’s considerable worldwide influence and appeal, royal fans laid flowers outside British embassies including in Washington, Berlin and Oslo.

Even the royal household’s staff were in tears yesterday, coming to terms with the loss of their much-loved boss, as well as the head of state.

One said: ‘However much you try to prepare yourself for this moment, it just hits you like a ton of bricks. She is irreplaceable. I just can’t believe we won’t see that impish smile again. There is a deep sense of shock.’