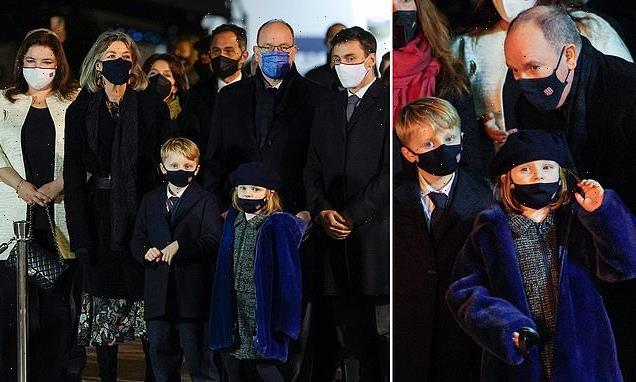 Princess Charlene of Monaco misses ANOTHER milestone: Royal is nowhere to be seen at St Devote Day as Prince Albert is joined by twins Princess Gabriella and Prince Jacques, 7, and his sister Princess Caroline in boat-lighting ceremony

The monarch, 63, wrapped up warm in a black coat and mask as attended the national celebrations with his sister Princess Caroline of Hanover, his nephew Louis Ducruet, and cousin Melanie-Antoinette de Massy.

But Princess Charlene, who turned 44 yesterday, was no where to be seen as she continued to get  medical treatment outside the country.

Yesterday,  the royal a slideshow of photos to mark the occasion, including candid snaps of her husband and children. 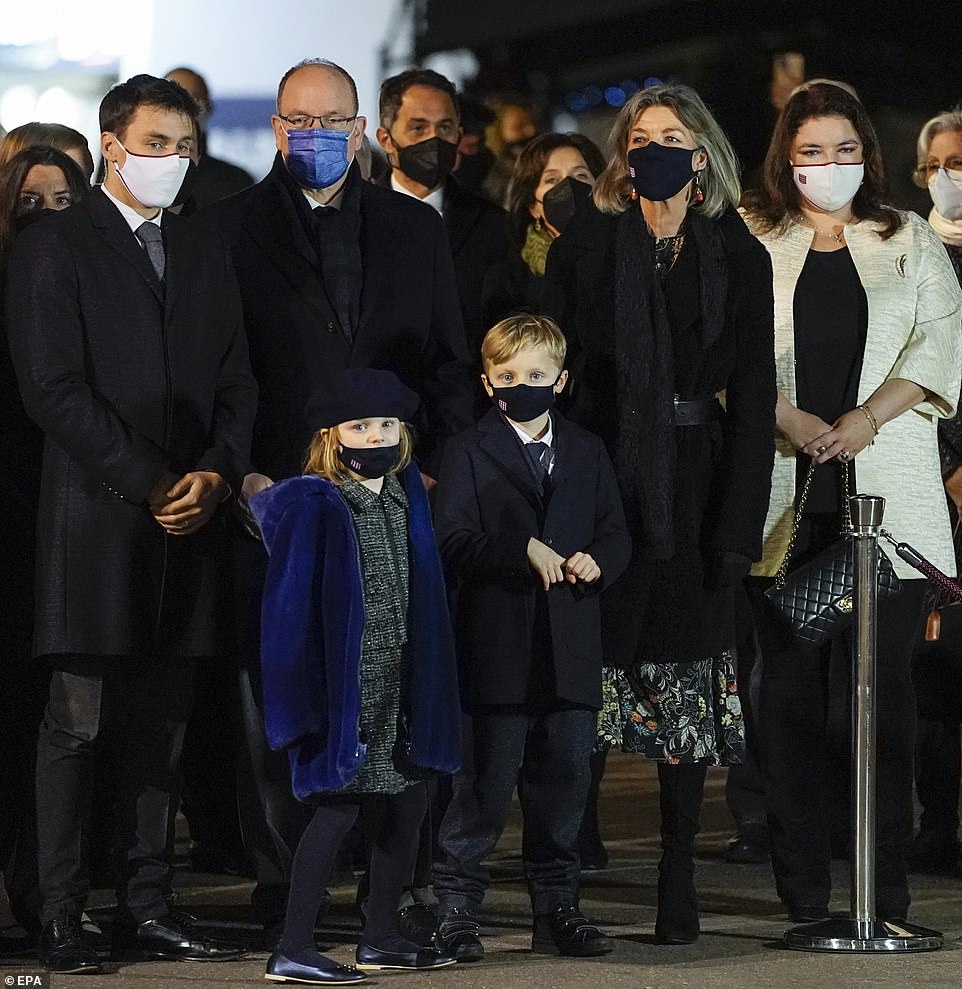 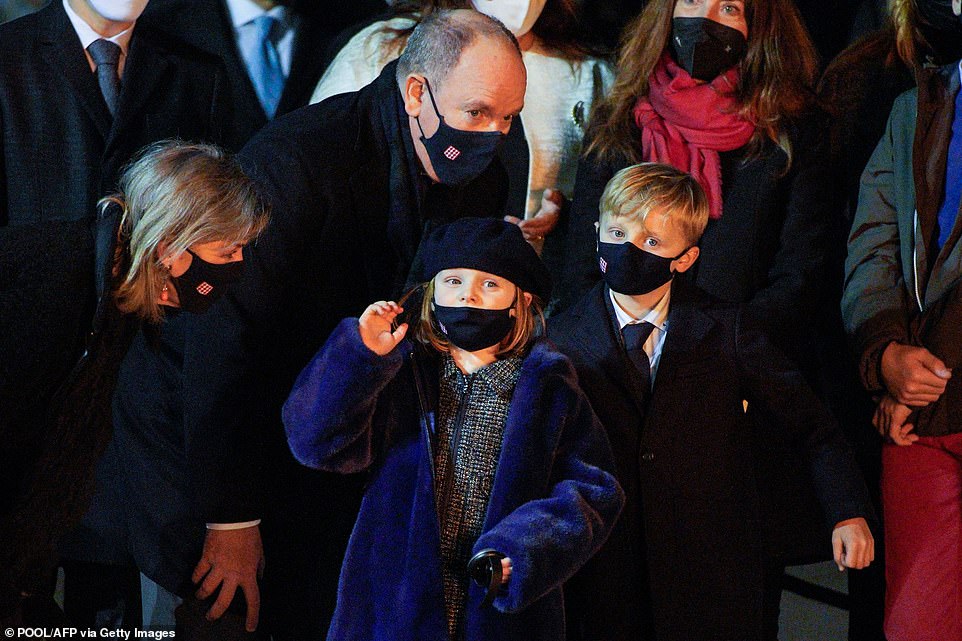 Princess Caroline of Hanover and Prince Albert II of Monaco, share a moment with Princess Gabriella (centre), and Prince Jacques during the symbolic burning of a sailboat at the Sainte Devote festivities, in Monaco

St Devote Day marks yet another milestone without her family, after she missed her twins’ birthday and Christmas last month.

The former Olympic swimmer was admitted to an undisclosed treatment facility in November, within days of her return to Monaco following a 10-month absence in her native South Africa.

Albert has remained vague as to the exact cause of Charlene’s illness, although he has said she is suffering from ’emotional and physical exhaustion’. Last month it emerged she is still ‘months away’ from a full recovery.

Albert took their children to visit their mother over the Christmas holidays but it is not known whether they saw each other on her birthday yesterday.

Dressing up for the occasion, both Jacques and Gabriella wore all black ensembles and stayed Covid-safe with face masks.

Meanwhile, Louis Ducruet, 29, the son of  Princess Stéphanie of Monaco and her former bodyguard Daniel Ducruet opted for a smart suit and tie. 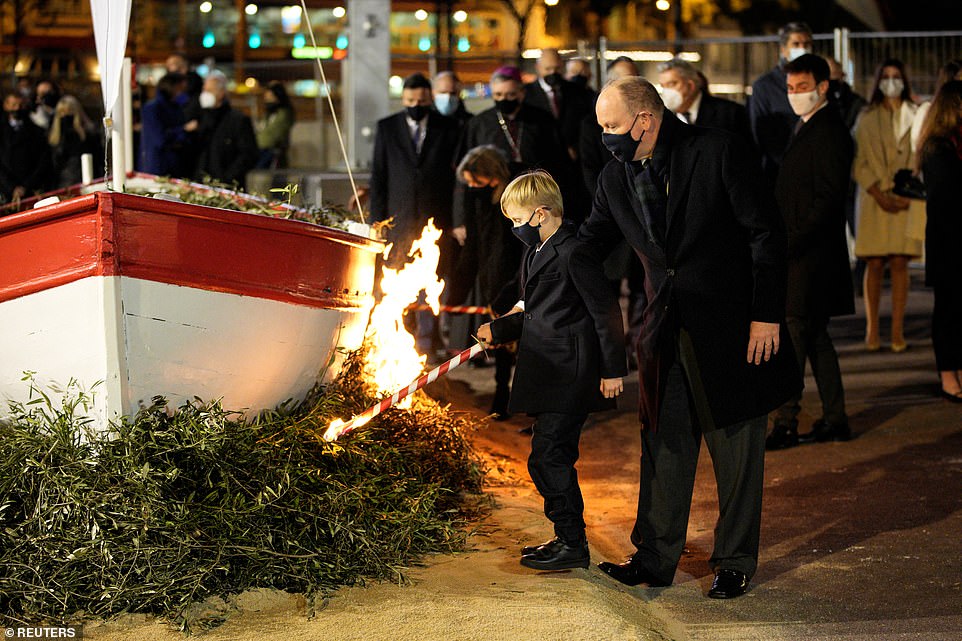 St Devote Day marks yet another milestone without Charlene has spent without her family, after she missed her twins’ birthday and Christmas last month. Pictured: Prince Jacques of Monaco and Prince Albert II of Monaco set alight a sailboat during the Sainte Devote festivities 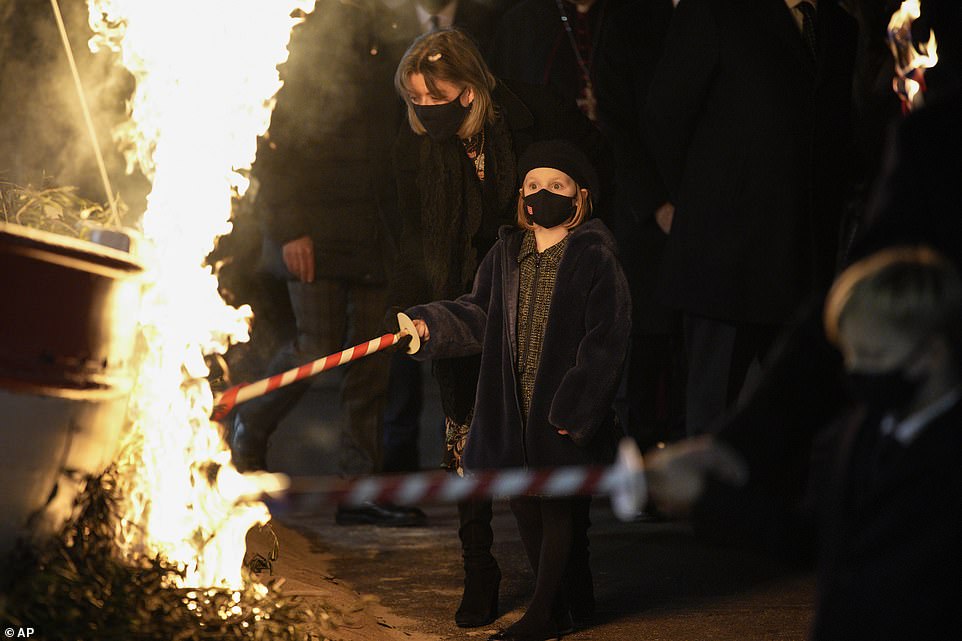 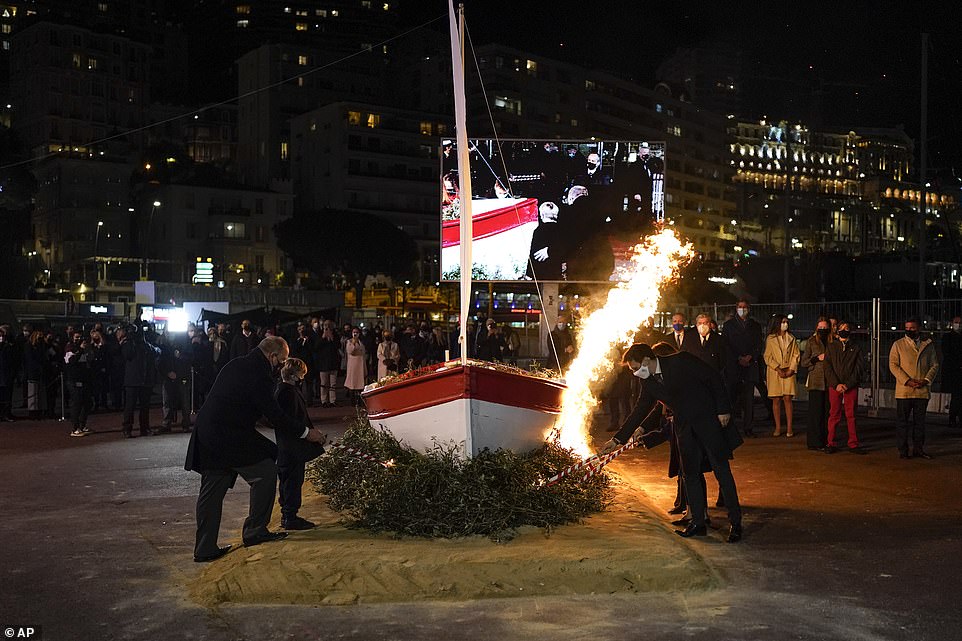 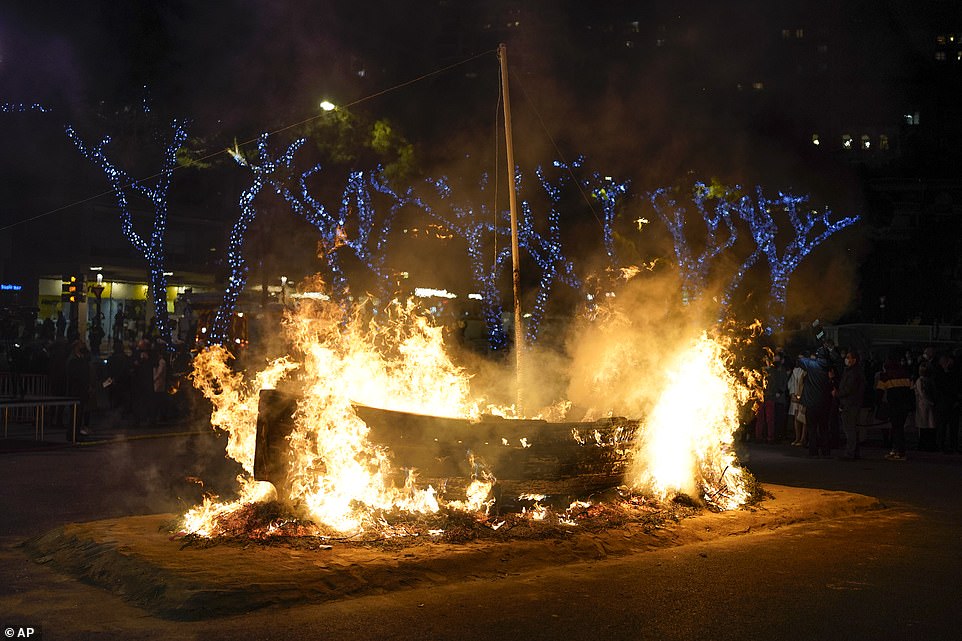 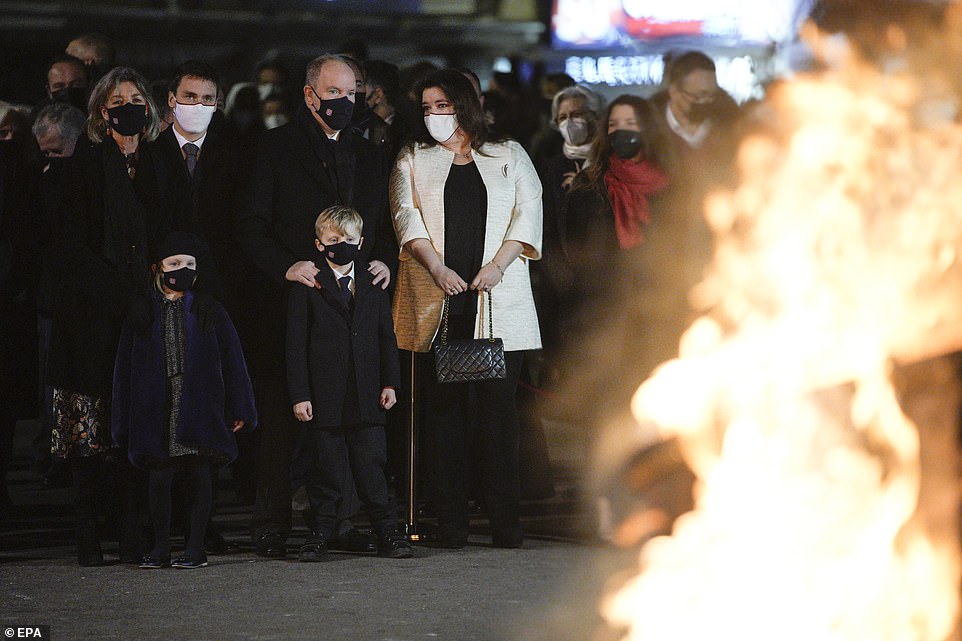 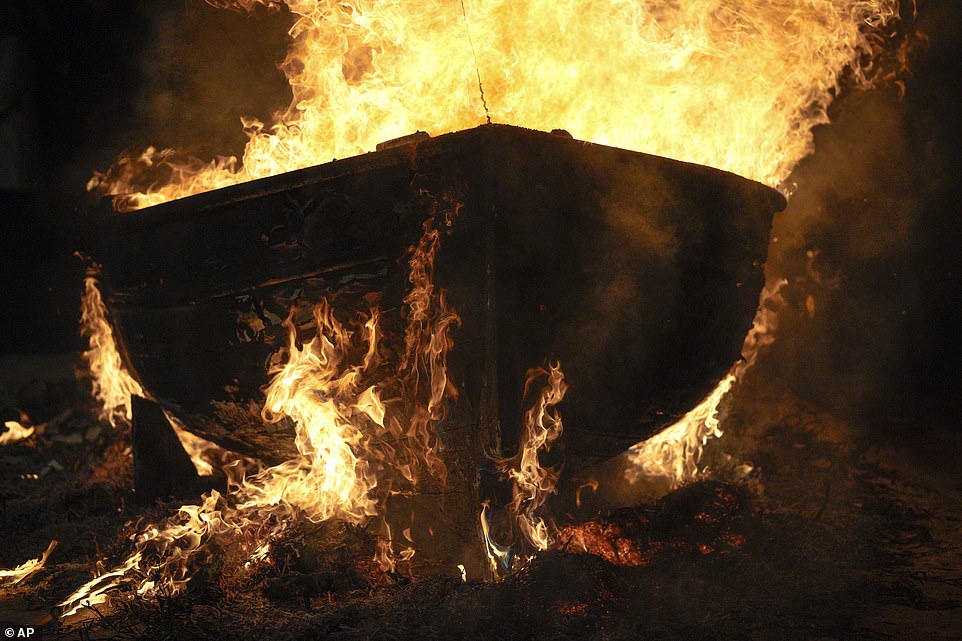 St Devote’s Day is a national holiday in Monaco in remembrance of their patron saint, a Christian martyr who was killed and tortured for her faith in the 4th century. 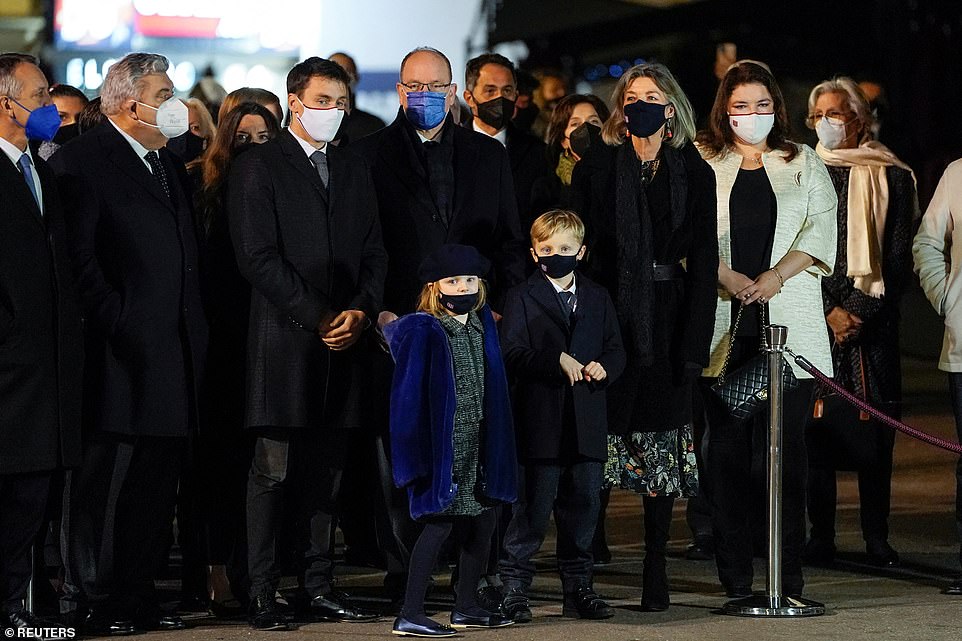 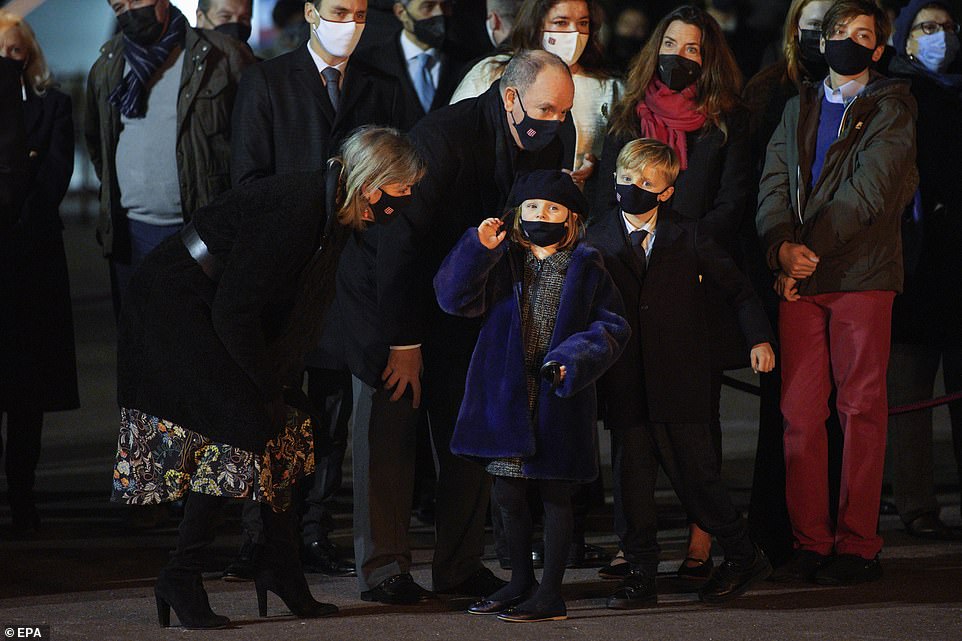 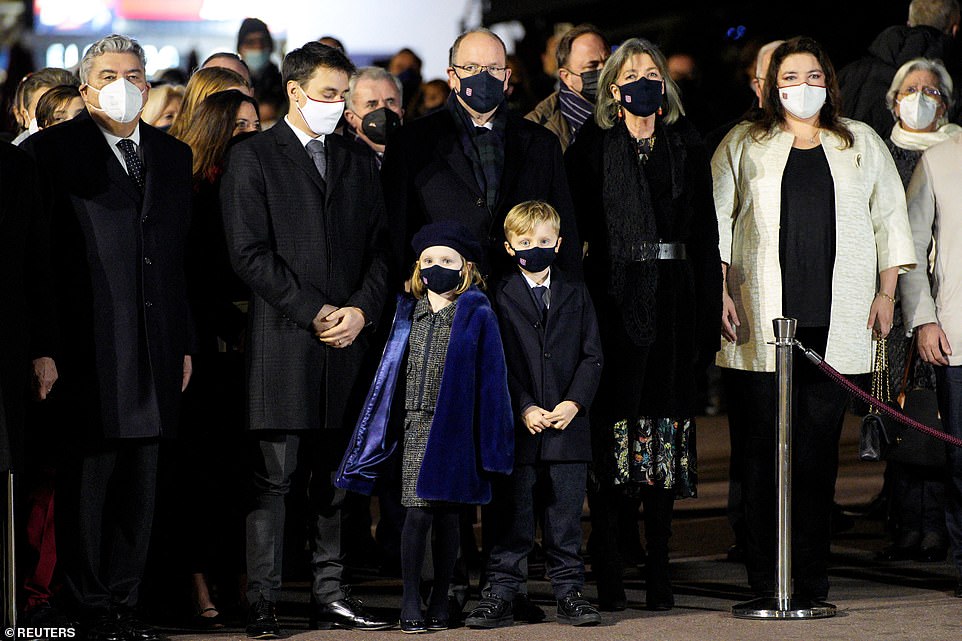 According to legend, Christians saved Saint Devote’s body and cast it off in a boat to Africa in the hope that once there she would receive a Christian burial. The royal family are pictured 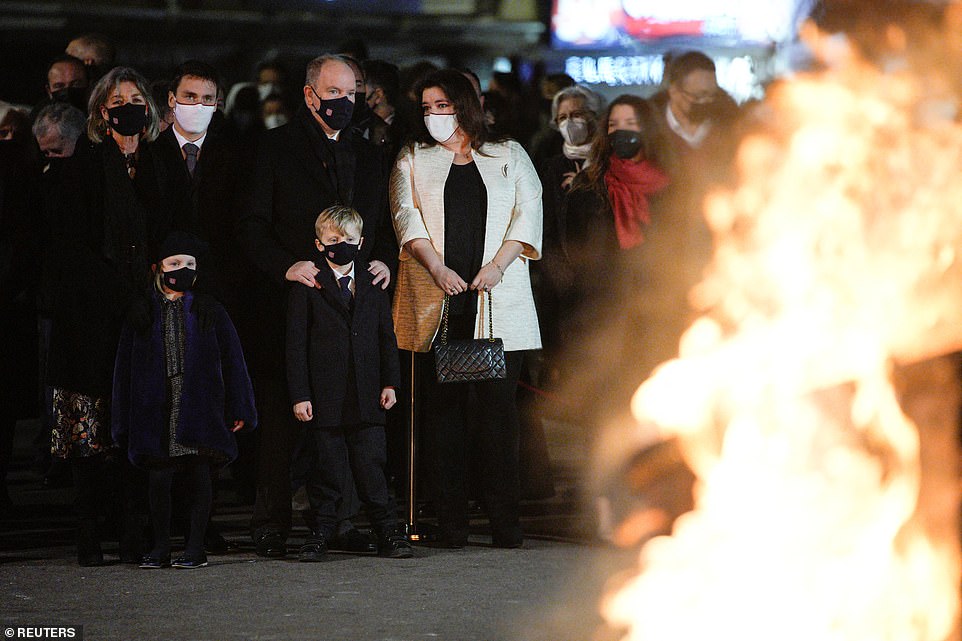 In line with the legend, Prince Albert and his children took part in an annual ceremonial ritual remembering the Saint’s final journey last night. 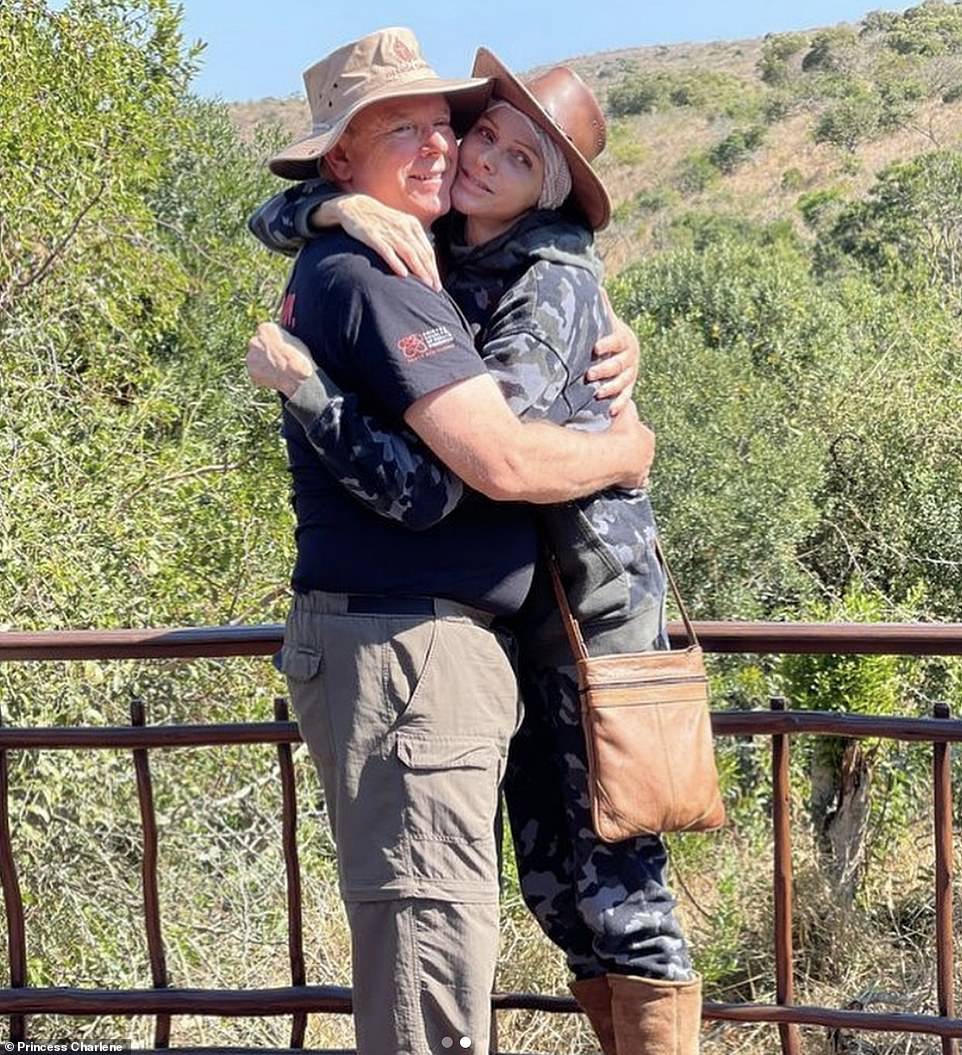 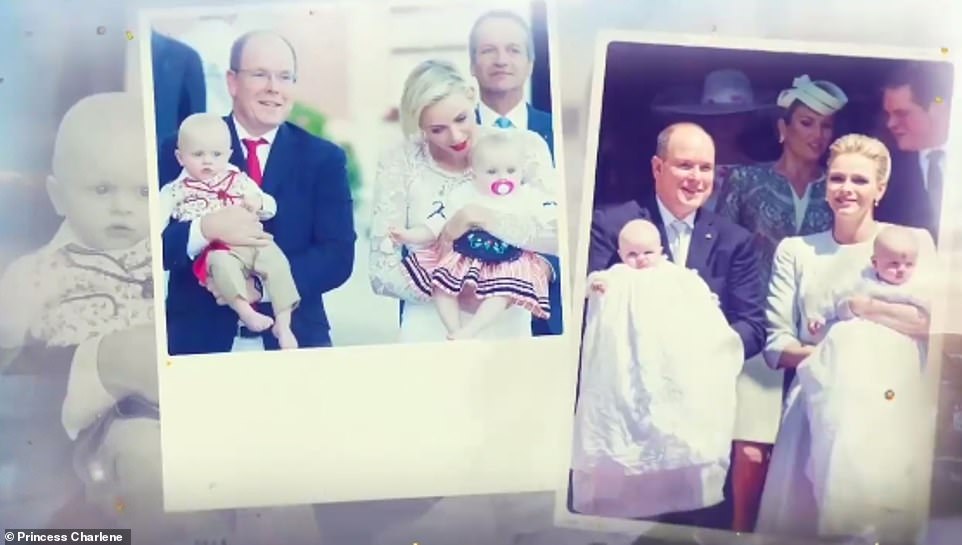 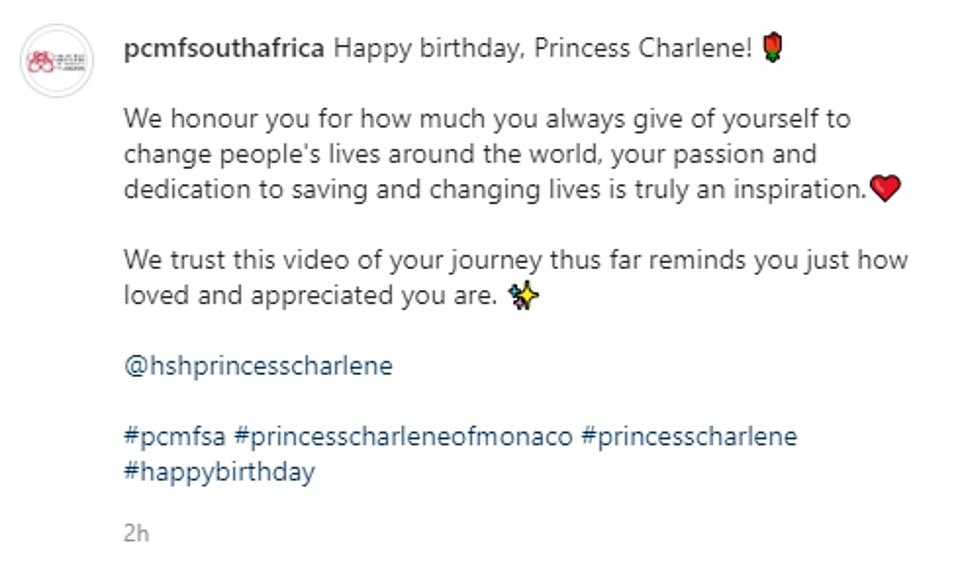 The video, originally posted by her charity the Princess Charlene Foundation, features photos of Albert and the twins, pictured, alongside ones of Charlene meeting world leaders and royals including the Obamas and Prince Harry

January 27 – Charlene is pictured with Albert for the Sainte Devote Ceremony in Monaco.

March 18 – Charlene is pictured at the memorial for the late Zulu monarch, King Goodwill Zwelithini at the KwaKhethomthandayo Royal Palace in Nongoma, South Africa

April 2 – Charlene posts an Instagram picture of herself, Albert and their twins Jacques and Gabriella for Easter.

It is unknown where the image was taken.

May 8 – Albert, Jacques and Gabriella attend a Grand Prix event in Monaco without Charlene

May 10 – Albert attends Monaco Gala Awards in Monaco without Charlene

June 3 – New photos emerge of Charlene on her conservation trip

June 24 – Charlene’s foundation releases a statement saying the royal is unable to travel and is undergoing procedures for an ear, nose and throat infection

July 2 – Charlene and Albert mark their 10th anniversary separately. ‘This year will be the first time that I’m not with my husband on our anniversary in July, which is difficult, and it saddens me,’ Her Serene Highness Princess Charlene said in a statement.

July 3 – Albert appears with glamorous niece Charlotte Casiraghi at the 15th international Monte-Carlo Jumping event, which is part of the Longines Global Champions Tour of Monaco,

August 13 – Charlene undergoes a four-hour operation. The reason is not announced

September 2 – She is discharged, with a statement from the Palais Princier reading: ‘Her Highness is closely monitored by Her medical team who said that Her condition was not worrying’

November 8 – Charlene arrives back in Monaco. Prince Albert said within hours it became clear she was ‘unwell’

Following his return from the trip, Prince Albert holds an intervention with Charlene’s brothers and a sister-in-law in which Charlene ‘confirmed’ she would seek ‘real medically framed treatment’ outside of Monaco

January 25 – Charlene celebrates her birthday alone outside of Monaco

St Devote’s Day is a national holiday in Monaco in remembrance of their patron saint, a Christian martyr who was killed and tortured for her faith in the 4th century.

According to legend, Christians saved Saint Devote’s body and cast it off in a boat to Africa in the hope that once there she would receive a Christian burial.

A dove then flew from her mouth and guided the boat to Monaco where it ran aground and the Saint has helped the principality in times of peril ever since.

In line with the legend, Prince Albert and his children took part in an annual ceremonial ritual remembering the Saint’s final journey last night.

The couple made their way through the crowds following a church service and stopped to shake hands with locals on their way.

They also helped set light to a fishing boat – a tradition that’s been going strong since the reign of Prince Louis II in 1942.

They were given torches which they used to set fire to a fisherman’s boat like the one that the Saint’s body was carried on.

Shortly before Christmas it was revealed Princess Charlene is still several months away from making a full recovery.

In November, Charlene was admitted to a treatment facility in an undisclosed location within days of her return to Monaco following a 10-month absence in her native South Africa .

Her husband spoke out to say she is suffering from ‘exhaustion, both emotional and physical’, while friends told Page Six that the mother-of-two ‘almost died’ while she was in her hometown of Cape Town.

A palace statement released on December 23 revealed Albert and the couple’s children were planning to visit Charlene during the Christmas holidays, as well as asking for the family’s privacy to be respected.

It added that the princess ‘is recuperating in a satisfactory and reassuring manner, although it may take a few more months before her health has reached a full recovery.’

Princess Charlene met Prince Albert in 2000 during a swimming competition in Monaco and the pair married in 2011, before welcoming twins Gabriella and Jacques in 2014.

Charlene returned to her husband and twins Jacques and Gabriella in November following almost a year in South Africa.

While on a solo charity trip to the country, she contracted a severe sinus infection which prevented her from travelling. She subsequently needed surgery to treat the medical condition, which again delayed her return to Monaco.

In the weeks after her arrival, Charlene remained absent from public duties.

Albert later revealed the family reunion had gone ‘pretty well’ in the first few hours, but it then became ‘pretty evident’ that Charlene was ‘unwell.’

He said the former Olympian ‘realised she needed help’, adding: ‘She was overwhelmed and couldn’t face official duties, life in general or even family life.’

Albert explained: ‘I’m probably going to say this several times, but this has nothing to do with our relationship. I want to make that very clear. These are not problems within our relationship; not with the relationship between a husband and wife. It’s of a different nature.’

He went on to tell a magazine her current state was a result of ‘several factors which are private’.

Albert continued: ‘She hadn’t slept well in a number of days and she wasn’t eating at all well. She has lost a lot of weight, which made her vulnerable to other potential ailments. A cold or the flu or God help us, COVID.’

He said it is ‘not cancer-related or personal relationship issue’ and later said she is suffering from ‘exhaustion, both emotional and physical’.

He later confirmed Charlene has been admitted to a treatment facility for undisclosed medical issues, as she works through a period of ill health. The location of the facility was not confirmed, though several sources claim it is in Switzerland.

However friends of the princess spoke out to suggest the issues were more physical than Albert appeared to suggest.

Speaking to Page Six, a source described as the royal’s friend said: ‘It is unfair that she is being portrayed as having some kind of mental or emotional issue.

‘We don’t know why the palace is downplaying that she almost died in South Africa.’

The source explained the royal had a severe ear, nose and throat infection, which resulted in ‘severe sinus and swallowing issues stemming from an earlier surgery’.

Elsewhere friends of Princess Charlene gave Tatler a rare insight into what the royal is really like, insisting that the former swimmer is a force to be reckoned with.

One source rubbished any public perception that Charlene is ‘naive’ and trapped in an unhappy marriage with Albert, saying: ‘I don’t for one second think she did not know what she was doing when she married him.’

But one warned the mother of Prince Jacques and Princess Gabriella, seven, is not the type to be blindly controlled by the Monaco royal household.

‘Charlene is no Princess Di.’ one said. ‘She may come across as being extremely naïve, but nothing could be further from the truth. She is very good at keeping her smarts under wraps.’

Doubts about the central relationship of Monaco’s royal family are not new.

Several residents living in the narrow medieval alleys of Monaco Ville confirmed to MailOnline that before she left for South Africa Charlene was spending most of her time outside the Palace, living in a modest two-bedroom apartment above an old chocolate factory about 300m away, rather than in the 12th Century Palace itself.

‘We often saw her outside the Palace and she would usually be alone or with a bodyguard,’ said one source, ‘but she was never with Albert – it was obvious she chose to spend most of her time in the apartment rather than the palace.’

Princess Charlene met Prince Albert in 2000 during a swimming competition in Monaco and the pair married in 2011, before welcoming twins Gabriella and Jacques in 2014.

Born in Rhodesia- a previously unrecognised state in Southern Africa colonised by the British, she relocated to South Africa aged 11.