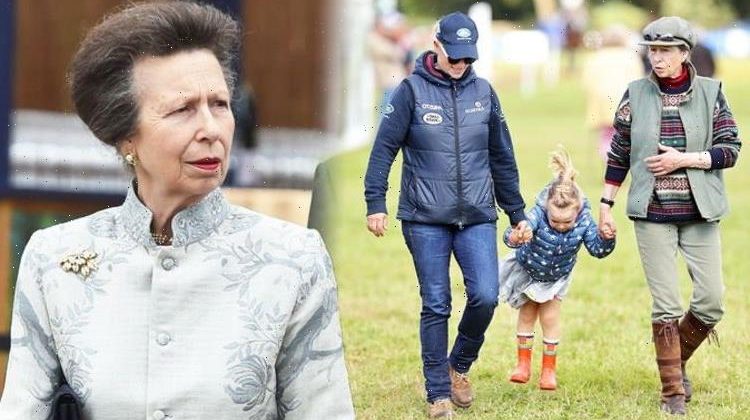 Princess Anne mostly appears in public in her capacity as a working royal. During these times, body language expert Judi James claimed the royal is “stoic” and “traditional”.

These qualities have also been seen in the Queen’s daughter when she has appeared publicly with her husbands and children, Judi continued.

She told Express.co.uk: “Princess Anne has never been a lover of the PDA, posing in a more traditional, hands-off way with two husbands and her own children.”

However, the expert suggested she may have been more “affectionate” behind closed doors when raising her children.

“But the way that daughter Zara has emerged as a wonderfully tactile and openly affectionate woman suggests there might have been a very different version of her mother away from the cameras,” Judi added.

She has been seen enjoying time with Zara’s children on a few rare occasions.

While they are not often spotted together, it is likely Princess Anne sees a lot of the Tindall’s.

This is because Zara and her family live near Princess Anne at Gatcombe Park.

When the Princess Royal is seen with her grandchildren, the expert suggested she shows a different side.

Judi explained: “With her grandchildren we do finally get to see the more demonstrative side to the Princess.

“With both Zara’s daughters having clearly inherited the tendency to look like free spirits with a huge enjoyment of life, the filter is off in terms of the way that Anne behaves towards them in public.

“It can be a joy to watch, as it does allow us a peek of the real Anne.”

The expert continued to say Princess Anne often shows her “tactile” side when with the young royals, which could be the “real Anne”.

Highlighting one outing, Judi said: “Anne has actually made herself lower than her granddaughter here to show full, undivided and very doting attention.

“The kiss is wonderfully revealing of Anne’s tactile, loving side, and the way both she and her granddaughter perform it suggests it’s a regular feature of their relationship.”

Another time with her grandchildren, Princess Anne seemed to focus on “having fun” rather than “royal protocols”.

Judi concluded: “All children love to play swings between two adults and Anne chats to Zara here while allowing her granddaughter to play between them.

“Like Zara, Anne seems happy to encourage the energetically playful side of the girls, allowing them to enjoy tearing about and having fun rather than worrying about royal protocols.

“When she made the decision to drop royal titles for her own children Anne appears to have allowed them and their own children the freedom to be demonstrative and happily playful that she and her brother Charles rarely enjoyed.”

Zara and Peter are the oldest grandchildren of Queen Elizabeth II.

Despite this, they did not receive royal titles at birth which has helped them live more privately than others in the Royal Family.