Following in Diana’s footsteps: Prince William lays foundation stone for new cancer centre at the Royal Marsden Hospital before meeting patients to hear about how clinical trials transformed their lives

The Duke of Cambridge made an emotional visit to the Royal Marsden Hospital today as he followed in Princess Diana’s footsteps almost forty years after her first solo engagement.

Prince William, 38, donned a medical face mask this morning as he met with patients to hear how clinical trials have transformed their lives and learned of how the Covid-19 crisis had changed their experiences of receiving treatment.

The royal, who was appointed President of The Royal Marsden NHS Foundation Trust in 2007, also laid the founding stone for the new Oak Cancer Centre at the hospital.

The move follows directly in the footsteps of his mother, who 30 years ago laid a stone to mark the start of the Chelsea Wing at The Royal Marsden in Chelsea.

The Duke said he was ‘personally delighted’ to be following in the footsteps of his mother, adding: ‘Every time I visit the Marsden, I am struck not just by the significant advances that are being made in research and treatment, but also by the hope and belief embodied by each patient and member of staff, even in the darkest of times.’ 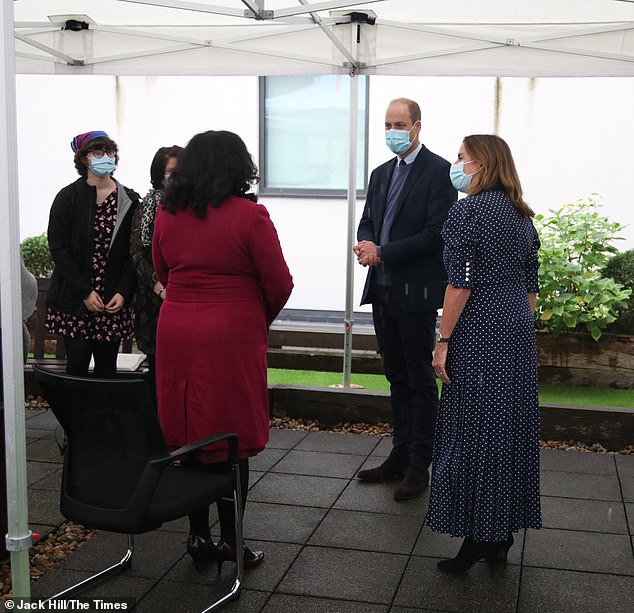 The Duke of Cambridge, 38, made an emotional visit to the Royal Marsden Hospital today as he followed in Princess Diana’s footsteps almost forty years after her first solo engagement

Prince William, who has regularly visited the hospital since he was appointed president in 2007,  donned a smart black blazer and soft blue jumper for the occasion.

The father-of-three opted to forgo his usual fabric face covering and instead wore a medical face mask throughout the visit.

He joined patients in a gazebo outside the hospital where he could be seen chatting with young people and their parents.

He was seen speaking to several patients one-on-one, and seemed engaged as he leaned forward. 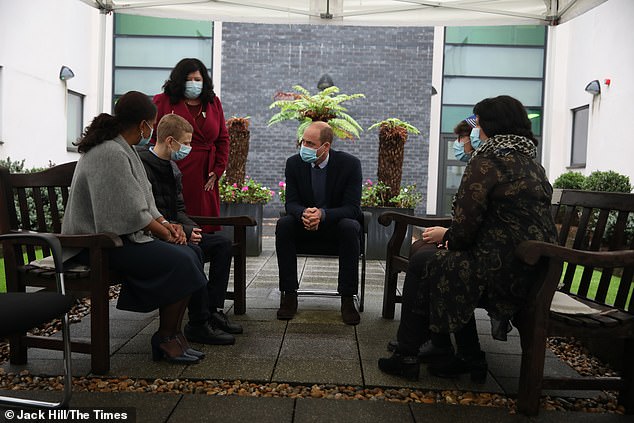 Meanwhile he went on to lay the foundation stone at the centre that will see 400 researchers under the same roof to find new cancer treatments.

The Duke gave a short speech at the groundbreaking ceremony, before laying the foundation stone, and praised ‘the incredible work’ that takes place at The Royal Marsden.

He explained: ‘I am personally delighted to be with you today to lay the foundation stone of the Oak Centre, thirty years after my mother did the very same thing at The Royal Marsden in Chelsea, commemorating the building of the Chelsea Wing.’

The Duke went on to comment on the ‘unimaginable challenges that all those at the Marsden have faced this year’, saying: ‘The knock on effects of coronavirus have been felt widely, but the impact on cancer treatment for patients up and down the country has been one of the most acute and challenging. 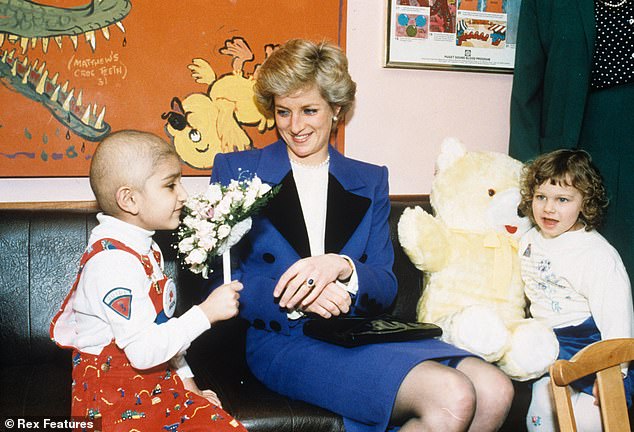 The hospital has a poignant significance for William, because it was the place Princess Diana visited on her first solo engagement in 1982 (pictured, at the Royal Marsden)

‘When I spoke to Cally and her team in the early days of the pandemic, she told me about the rapid changes that had been implemented to keep cancer treatment going for hundreds of patients who are cared for by The Royal Marsden.

‘This included the creation of the Cancer Surgical Hub which ensured patients from across London were able to continue with their urgent cancer surgery, and which will have saved countless lives.’

He added: ‘Earlier this morning I was privileged to meet patients who all spoke about the exceptional care they received, and how they felt safe in very difficult and often frightening times.’

The Duke went on to say the new centre would ‘bring together some of the world’s best minds to develop new treatments to save and improve the lives of cancer patients throughout the UK and around the world’, adding: ‘ Finally I want to say how proud I am as President of The Royal Marsden to be here today. 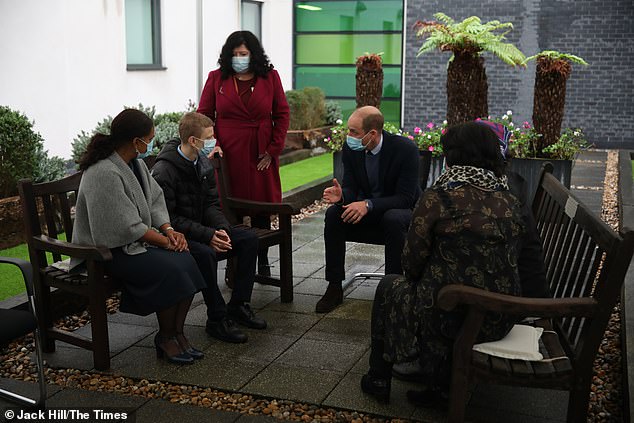 Before speaking with patients, the Duke laid a foundation stone for a new cancer centre that will see 400 researchers under the same roof to find new cancer treatments

‘Despite the challenging times we are living in, it is so important we take the time to acknowledge the tremendous work that continues all around us.

‘And that irrespective of the global pandemic, there remains hope for the many thousands of people dealing with the effects of cancer.’

During his visit, the father-of-three also heard from staff about several studies launched by The Royal Marsden to investigate the impact of COVID-19 on cancer treatment and care.

Frontline workers told him about the Surgical Cancer Hub The Royal Marsden and its cancer alliance formed at the start of the pandemic to provide cancer surgery to patients around the country. 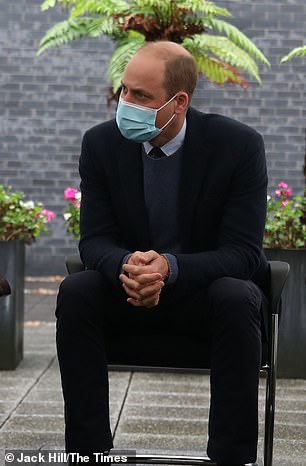 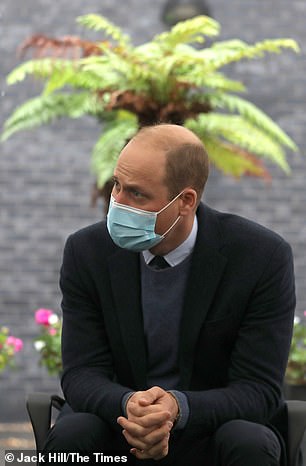 During the visit, The Duke met a small number of patients to hear how clinical trials at The Royal Marsden have transformed their lives, and to talk about their experiences of receiving treatment during the pandemic

As part of the visit, he launched a public appeal to raise the final £8million to complete the  Oak Cancer Centre, which is due to open to patients in 2022.

The hospital has a poignant significance for William, because it was the place Princess Diana visited on her first solo engagement in 1982.

Prince William was appointed President of the hospital in 2007, a position previously held by his mother, Diana, Princess of Wales.

William became President of the Royal Marsden NHS Foundation Trust in 2007, taking over the Presidency from his mother who held the role from 1989 until her death in 1997. 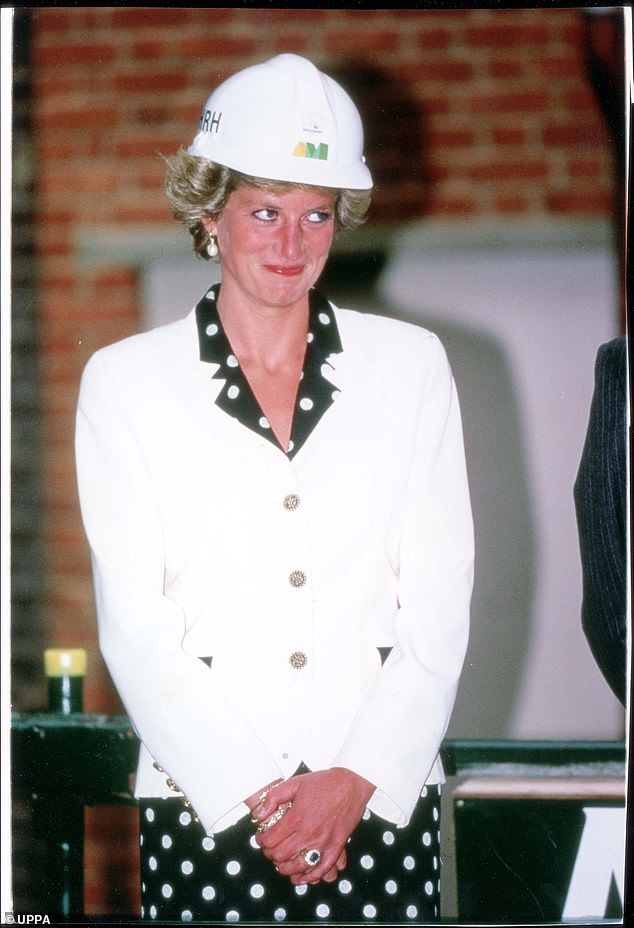 It comes amid a busy few days for the Duke, who yesterday joined Kate Middleton to  attend the launch of one of the 112 Hold Still community exhibition sites at Waterloo Station.

The photography contest, launched by the Duchess of Cambridge in May, invited people of all ages from across the UK to submit a photographic portrait which they had taken during lockdown.

Kate and William went on to travel to St. Bartholomew’s Hospital to speak to frontline workers including Joyce Duah, a specialist oncology pharmacist at the hospital.

Later, they were joined by Good Morning Britain host Kate Garraway outside the hospital.

The royal couple appeared to be being interviewed for the Pride of Britain Awards later this month.

This will be the first time Kate has been involved in the awards, while William last attended the ceremony in 2017.