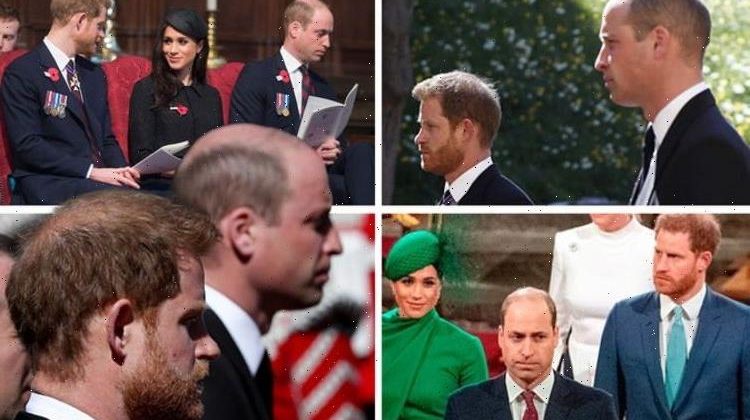 Prince William and Prince Harry were the best men at each other’s weddings in 2011 and 2018 respectively. They had a shared tragedy when they both lost their mother, Princess Diana, in 1997. However, after Prince Harry moved to America with his wife Meghan Markle in March 2020, the two brothers have rarely got the chance to see each other.

Prince Harry has returned to the UK twice since.

He returned in April 2021 for his grandfather Prince Philip’s funeral.

Harry later returned in July to unveil a statue of Princess Diana along with William in Kensington Gardens.

According to a body language expert, there were “secret signals” that were apparent between the two brothers which “exposed the breakdown” in their friendship.

Judi James spoke exclusively to Express.co.uk and claimed there were secret signals in the brothers’ body language that hinted at their tense relationship.

Judi said: “There were many secret signals that exposed the breakdown between the two royal brothers.

“For William and Harry, this body language showed the ideal blend of two different characters combined in friendship and like-minded thinking.

“When we look at their poses at Harry’s wedding, we are seeing a much more conscious-looking trait of twinning.

“They are using eye contact and their similar facial expressions suggest deliberate mimicry.

“This social ‘effort’ suggests they might have been feeling the need to cover for a lack of more subliminal bonding.

“In the earlier pose with Kate, we can see the brothers adopting a matching angle of lean and their eye-attention is focused on the same spot.

“Harry’s hand on his jacket suggests a slightly more formal approach to his sister-in-law but there is a strong sense of emotional sharing, as though they form a really tight family trio.

“In later poses, it is very much William and Kate as a duo with Harry not even peripheral to the group.

“At the service of Remembrance William and Kate walk ahead while Harry seems to actively hand back behind them.

“All those non-verbal signals of smiling and fun we used to see from the brothers when they were in the same room have gone here.

“William’s expression suggests regret and sadness while Harry’s cold eye expression makes it look as though he has had all the pleasure he once gained by being with William drained out of him.

“In their most recent poses at the Diana memorial, there was an attempt by William and Harry to signal brotherly warmth once again.

“Although, their facial expressions told a very different story.

“Oddly though, their subconscious mirroring that occurred even when they were out of sight of one another suggested a ghost of the intense closeness they once used to enjoy.”