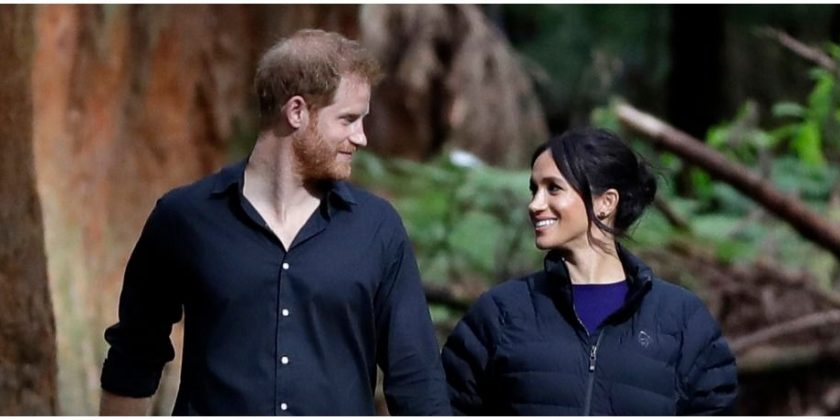 Meghan Markle made a royal faux pas when she and husband Prince Harry released their controversial Christmas card, which shows the newly married and expecting royal couple with their backs to the camera, captured in a black-and-white photo looking at a fireworks spectacular set up for their wedding reception.

But, what Markle didn’t realize is that a photo from her first wedding to Trevor Engleson would be unearthed by eagle-eyed royal watchers and it would bear a striking similarity to her current pic.

Express reported that the black-and-white image of the Duke and Duchess of Sussex was heavily criticized not only because the royals had their backs to the camera but also because it was deemed unconventional.

While we don’t know why Markle and Prince Harry chose the photo, fans have realized the stylish pic looks eerily like a save the date photo she sent out with Engleson to tell family and friends the date of their 2011 wedding.

Express noted that both images are in black and white, showing Meghan with her arm around her husband and his around her and both show the couple with their backs to the camera.

The only difference, other than the man standing beside her, is that the first image shows the duchess and her ex-husband sitting on a beach.

Markle is also positioned on the right-hand side of both men.

The caption for the photo of Markle and Engleson followers to “save the date” with the day of their wedding, which was September 10, 2011, included the location being Jamaica and “trevor & meghan” on the foot of the post.

Some social media users had issues with the strange similarities in the photos.

One fan noted on Twitter, “The similarity between Meghan’s wedding invite with Trevor and the Christmas card with Harry is spooky……To do the same idea with each husband is so weird to say the least #royalchristmascards #MeghanMarkle.”

Another slammed Markle by stating on Twitter, “Clearly she thinks this is a look. It is…A stupid look… Nothing Christmassy… Nothing romantic it could be anyone…I wonder what her look will be with her next husband.”

Markle and Prince Harry wed in May of 2018. Within five months, it was announced that the couple would be welcoming their first child together in the spring of 2019.

Markle will spend the Christmas holidays with the royal family, her first since becoming an official member, and head into 2019 with the decision and announcement of which charities and causes she will sponsor as the Duchess of Sussex.