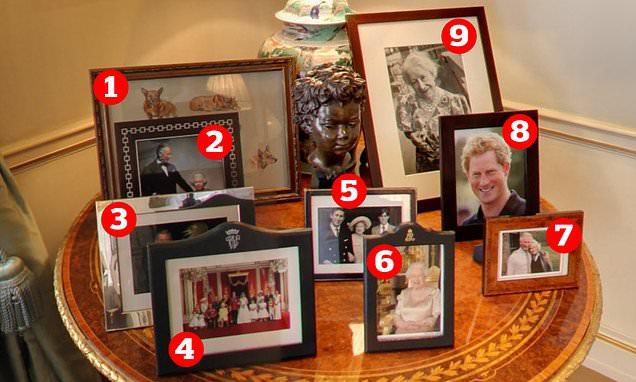 Charles’ favourite family photos! Prince puts his loved ones in pride of place in Clarence House – and it’s his beloved granny the Queen Mother who has the biggest one of all

Prince Charles has some of his favourite family photos on display in the Morning Room of Clarence House, a new virtual tour of the property reveals.

The heir to the throne, who celebrates his 70th birthday today, has pictures of the Queen and snaps of his wife the Duchess of Cornwall in a touching arrangement on a side table in the corner of the sitting room.

Also on show is a formal family portrait from the Duke and Duchess of Cambridge’s wedding day and a handsome portrait of a young Prince Harry.

But it is is black and white photo of his grandmother, taken on her 96th birthday, that is given the honour of the largest frame – towering high above any other.

Notable in her absence is his daughter-in-law the Duchess of Sussex, however the photos inside the property might well have been taken before the royal wedding in May. 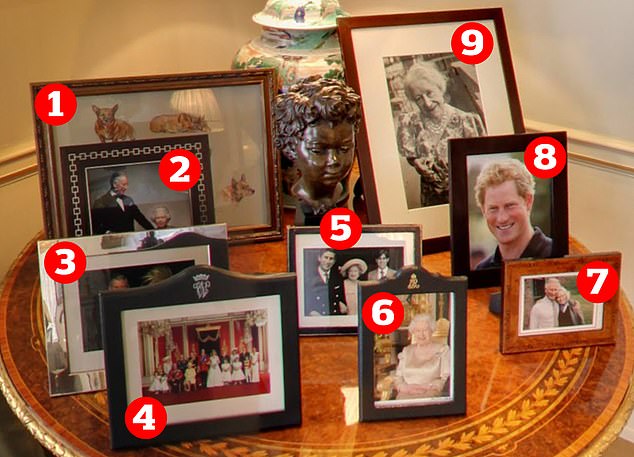 This insight into some of the prince’s favourite photos is among the many treasures offered by the new virtual tour of Clarence House, the official London residence of Prince Charles and the Duchess of Cornwall, 69.

The royal allowed specialist Google photographers access to the rooms and corridors of his home so that they could document every inch on camera.

These individual images were then pieced together to create a 360-degree tour that can be taken by virtual ‘visitors’ from wherever they are in the world.

This particular corner display is located in the Morning Room, which is used as a sitting room by Charles and Camilla. 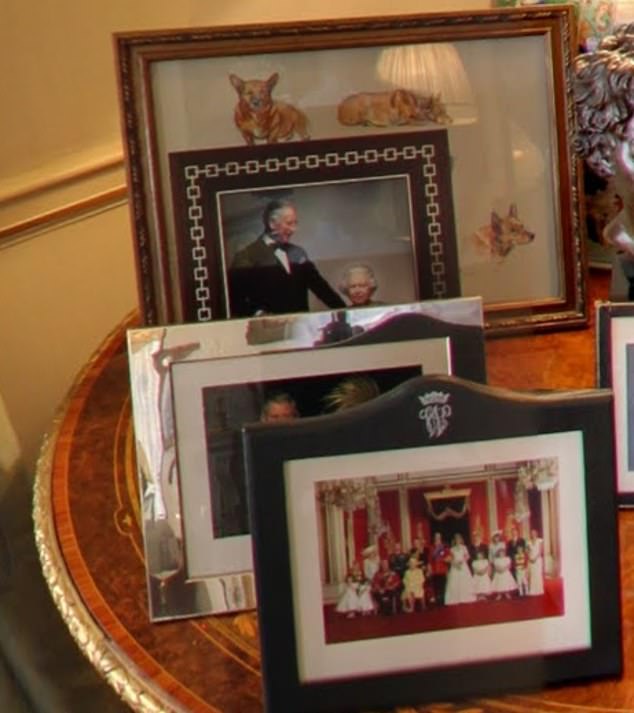 Two most important women: A photo of the Queen with Prince Charles on her 90th birthday sits in front of an illustration of corgis. In front is a photo of Charles and Camilla, just seen 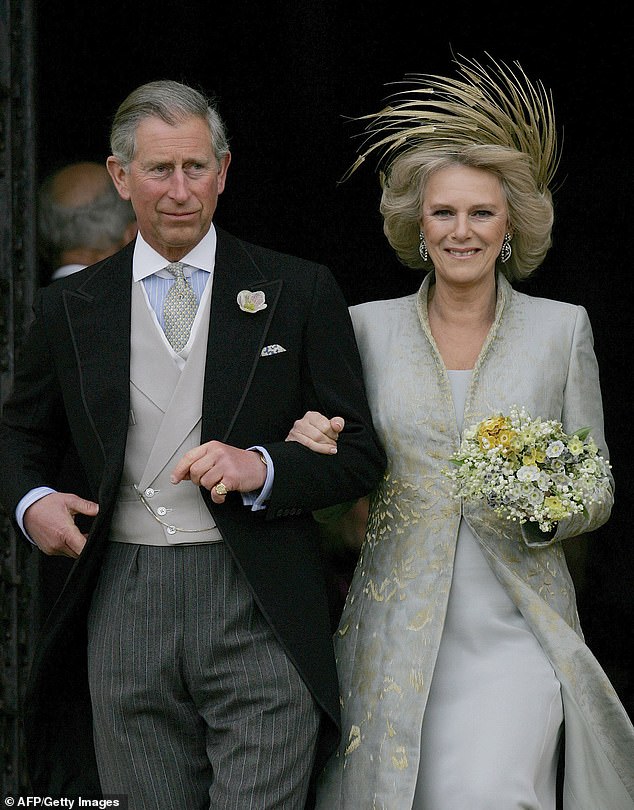 Wedding day: Charles and Camilla emerge from St George’s Chapel following the church blessing of their marriage in August 2005. The photo is framed in Clarence House 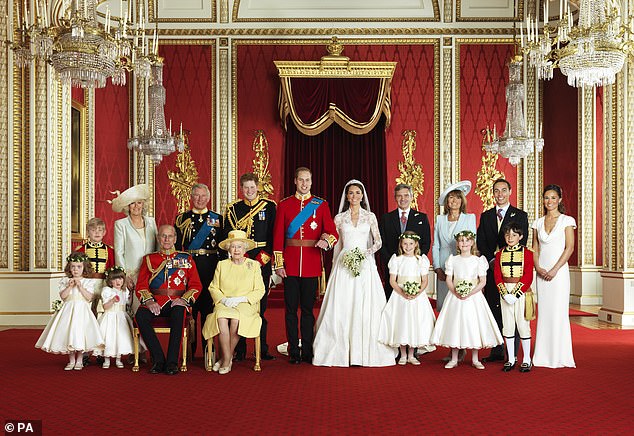 Family photo: This formal portrait from the Duke and Duchess of Cambridge’s wedding day is also on show. It shows William’s family (left) with the Middletons (right) in Buckingham Palace

The blue-themed room has served as the backdrop for a number of important occasions, including the formal family photographs taken following Prince Louis’ Christening at the nearby St James’s Palace in July.

In the forefront of the nine images is a portrait taken of the Queen in 2017. The image, which is not believed to have been released to the public, was taken to commemorate the 150th anniversary of Canada’s confederation.

To one side there is the large family portrait from the Duke and Duchess of Cambridge’s 2011 wedding, on the other is an informal snap of Charles and Camilla taken by a friend in the summer of 2015.

The touching photo, which shows the couple with their arms around each other, was chosen to feature on their Christmas card that year. 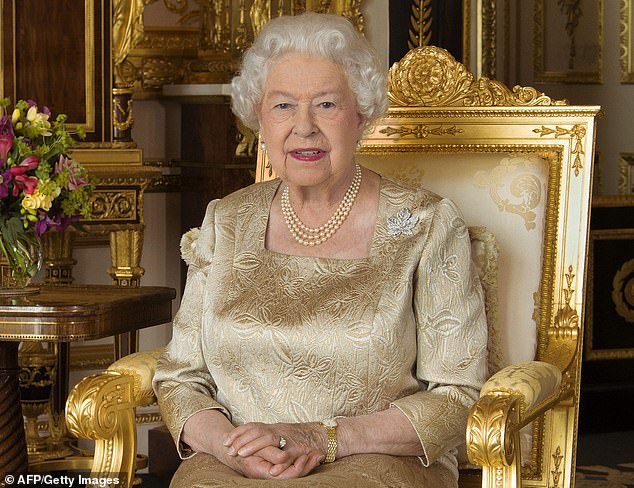 Proud: Prince Charles has a photo of the Queen taken at the same time as this one. It was part of a set to mark the 150th anniversary of Canada’s confederation in 2017

Charles also picked out one of his favourite photos from his own wedding to Camilla in August 2005. Although only a glimpse can be seen, it is thought to be one taken of the couple as they emerged from St George’s Chapel, Windsor Castle, following the Service of Prayer and Dedication.

Elsewhere there is a candid snap of Prince Harry and a formal portrait of Prince Charles with the Queen that was taken for her 90th birthday in 2016.

There is also an illustration of some Corgis – perhaps a nod to the Queen’s beloved pets.

Notable in the display are photos of Charles’ beloved grandmother, the Queen Mother, who features twice. 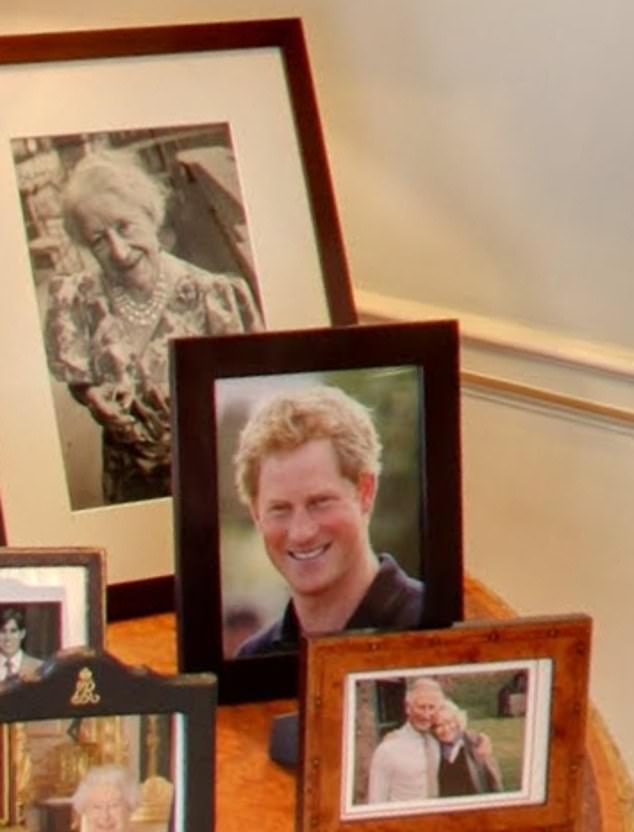 Much missed: A photo of the Queen Mother on her 96th birthday in 1996; a picture of Prince Harry from several years ago and a touching informal snap of Charles and Camilla 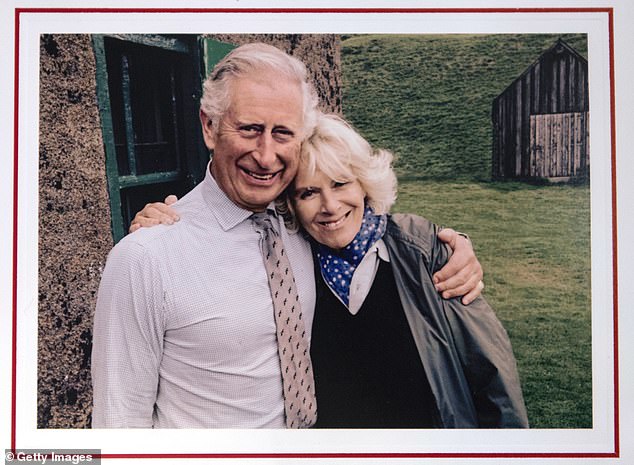 Affectionate: The photo of Charles and Camilla, taken by a friend of the summer of 2015, was selected by the couple for the front of their Christmas card that year, pictured

The first shows the Queen Mother standing between grandson Prince Charles and Prince Andrew at her 75th birthday celebrations at the Royal Lodge, Windsor, in 1975.

Her arm is linked lightly through Charles, a slight hint at the close bond they shared.

The second photo, also in black and white, shows the Queen Mother smiling up at the camera on her 96th birthday.

It is notable that she appears not to be wearing a hat in the image, suggesting it is one that was taken privately and not released to the public.