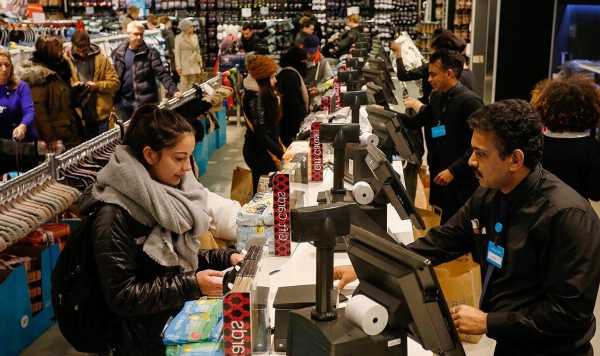 Former Primark worker Georgia Pontin has lifted the lid on some of the behind-the-scenes “secrets” employees use to spot thieves. The vlogger shares lifestyle content and insights into her previous career at Primark with her audience of 91.4K followers on her TikTok page @pontasaurus.

In a video, Georgia shared the first of her “Primark secrets from someone who used to work there”, detailing how staff working on tills can catch out people who might be trying to steal items from the store.

According to Georgia, this is something which commonly happens when people are buying bags or purses. She said: “If someone is buying a handbag or purse we had to check it. We had to open it up and physically check what’s inside because people think they can hide stuff in them.”

However, she was not allowed to be upfront with customers about whether they were really trying to steal or not. Georgia explained: “If we were on tills and found something in the bag when we were checking it we were not allowed to go ‘oh, are you stealing this?’

“We had to say: ‘Do you want this too?’ And if they really want it they will say yeah, but if they’ve been caught most of the time they will act as though they didn’t know it was in there.”

She added: “Sometimes it’s a complete accident and people don’t actually know three is something in the bag but we do have to check in case someone is actually trying to steal something. But whenever I was on the tills and I had to ask someone that then I would think they were stealing but that was just me.”

Her video has amassed 74.2K “likes” and over 300 comments. Some commenters were amazed that, despite Primark’s famously low prices, people still attempt to steal from the store.

However, Georgia pointed out that it was a pretty common occurrence. In a comment, she said: “So many people would steal things. It’s mad how many people we had.”

As well as some regular thieves known to the store, Georgia said that security guards also work together between stores to highlight people who have taken items without paying. “If someone stole from a nearby store, the security would watch the door until they came in and then call the police,” she said.

A commenter named Lauren said that she had previously been caught out by the bag checking, even though she genuinely didn’t know someone had put something inside of the bag she was trying to buy.

She explained: “This happened to me once. I was in Primark buying a bag for school and I didn’t check inside before going o pay for it. When [the employee] pulled it out she was like: ‘Oh, do you want this?’ I was like: ‘No, I didn’t put it in there’. I was embarrassed.”[SIC]

Another commenter named Aki added: “This happened to me. I usually check it and this one day I didn’t [and] somebody put a top in there. I was super embarrassed.”