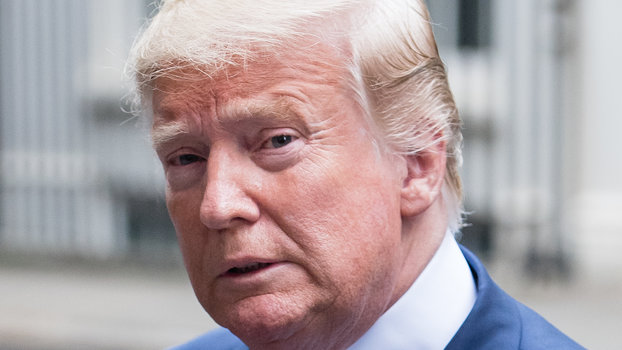 President Trump — the unofficial king of backpedaling — has just clarified his "nasty" comment about Meghan Markle (kind of).

In a span of only a few days, Trump insulted the Duchess of Sussex by calling her "nasty" when a reporter suggested she wasn't a fan of his politics, and, then denied saying it all together despite audio evidence. But now POTUS is clearing the air about his throwaway insult during an interview with Piers Morgan on Good Morning Britain.

“She was nasty to me. And that's OK for her to be nasty, it's not good for me to be nasty to her and I wasn’t. You know what? She's doing a good job, I hope she enjoys her life… I think she's very nice," he told Morgan.

Um, is that supposed to be an apology?

ICYMI, before Meghan became a royal, she was outspoken about her dislike for Trump, and labeled him as "misogynistic" and "divisive" during the 2016 election.

During his GMB sit-down, Trump also wanted to set the record straight about Prince Harry reportedly ignoring him during Monday's state banquet. Basically, he declared the supposed feud as fake news. “No, no, no, just the opposite,” Trump explained. “In fact, he spent a lot of time talking to Ivanka and talking to my family. I went up – he couldn't have been nicer. Couldn't have been nicer. I think he's great.”

“I congratulated him and I think he's a terrific guy. The Royal Family is really nice,” he added for good measure.