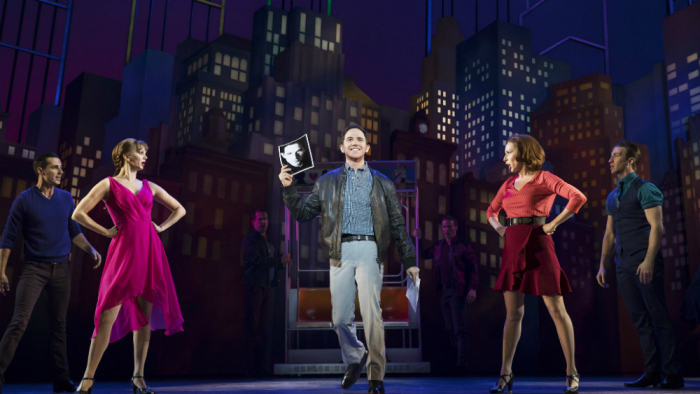 “Tootsie,” a jaunty new stage musical adaptation of the 1982 movie comedy that starred Dustin Hoffman, has a real degree of currency to it, and it’s not because book writer Robert Horn (“13: The Musical”) and composer David Yazbek (“The Band’s Visit”) have set it in the present. Rather than telling the story — about a male actor who pretends to be a woman to get a gig — as some kind of look-what-women-go-through, pseudo-empowerment feminist lesson, they choose instead a nearly full-on satirical take on the narcissistic male ego. It’s that perspective that lifts the story’s farcical spirit into the contemporary.

Most everything here comes off with a vibrant musical-comedy zeal, from Horn’s fresh and funny one-liners to Yazbek’s brassy-funky-jazzy score to the comic performances led by Santino Fontana (“Rodgers and Hammerstein’s Cinderella”).

Fontana makes the arrogant actor Michael Dorsey insufferably self-involved from the start, interrupting the bouncy (if a bit bland) opening number to complain that the lyrics don’t fit the backstory he’s created for his character.  It’s the only time we’ll feel any sympathy for the sleazy director Ron Carlisle (Reg Rogers), who fires Michael on the spot. Soon, his agent (Michael McGrath) has dropped him. Desperate, and having learned of an audition from his neurotic ex-girlfriend Sandy (Sarah Stiles, very much bringing to mind a young Bernadette Peters and transitioning from stream-of-consciousness monologues into an ultra-clever patter song), he transforms himself into Dorothy Michaels, who comes across a bit like Dustin Hoffman’s version but with a major tilt towards the Church Lady.

Horn’s book switches out the screenplay’s soap opera setting for a Broadway musical variation of “Romeo and Juliet” called “Juliet’s Curse,” in which Juliet (played by the Julie Nichols, who is portrayed by “SpongeBob SquarePants” alum Lilli Cooper) awakens and falls in love with Romeo’s brother, played by a dumb-as-a-doornail reality star with hot abs named Max Van Horn (a terrific John Behlmann).

As Dorothy, Fontana delivers songs with an impressively stable falsetto, and soon after he/she has been cast as the nurse, Michael’s ego is back at it, but this time Dorothy gets taken seriously by both the cast and the producer Rita Marshall (Julie Halston, in a campy-crusty turn that marries Joan Rivers and Lew Wasserman). The show is retitled “Juliet’s Nurse,” and as Juliet declares full feminist independence, Romeo’s brother falls in love with the Nurse — and Max falls for Dorothy, in part, he sings, because she’s built like a tractor.

It’s all absurd, ridiculous to the point of surreality, but the musical-theater setting enables the whole show to poke giant fun at itself and have lots of fun doing it.  The choreography, from Denis Jones, a series of bounces and gyrations, gets satirized by Rogers’ Carlisle early and then makes those movements charming for the best number of the evening, a “Producers”-like tribute to the jittery excitement of opening night. Yazbek’s score is strikingly, self-consciously over-the-top: You know something’s right when the music itself feels witty.

The show, directed with exactitude and comic panache by Scott Ellis, revels in Michael’s distress when he falls for Julie. In fact, Act II opens with Michael’s roommate Jeff Slater (Andy Grotelueschen, wonderfully fusing down-to-Earth intellect with friendly frumpiness) delivering an especially funky song called “You F—ed It Up.”

Let’s face it: The show makes fun of mansplaining while still doing it. And Julie, supposedly the leading lady of the show and the show-within-the-show, ends up tossed into pure dullness with both, despite Cooper’s skill and genuinely likable presence. To a certain extent, this all works despite the story rather than because of it, since the more human elements get sacrificed to the silly.

But the show has a personality that is all its own, despite borrowing from the movie, and that gives it a noted advantage over other, often dreary film-to-stage adaptations.