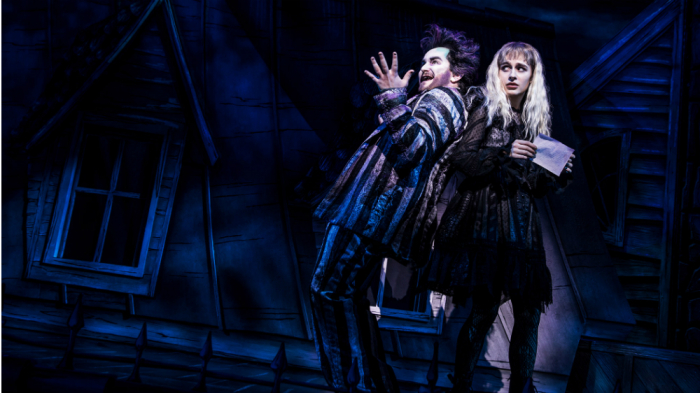 The 1988 film “Beetlejuice” spawned a cult following for the freshly minted “gothic fantasy” style of its director, Tim Burton, and for Michael Keaton’s delicious performance as a comically macabre maître d’ of the netherworld. Thirty years later, Warner Bros. Theatre Ventures and its partners have turned the concept into a decidedly raunchy musical that is laser-targeted to today’s early-teen market. But in its tryout run at D.C.’s National Theater before a scheduled March booking on Broadway, it’s a frenetically paced and woefully overcooked endeavor that’s excessive in virtually every respect.

The story remains a haunted-house fantasy about the efforts of a newly deceased couple (Rob McClure and Kerry Butler) to drive away the annoying new owners (Leslie Kritzer and Adam Dannheisser) of their cozy fixer-upper. Burton’s name doesn’t qualify for the credits, but his influence is obvious in the humorously macabre elements inserted by director Alex Timbers (“Peter and the Starcatcher”) as he otherwise marches in new directions. His decidedly heavier stamp is revealed at the outset, in an elaborate opening number that introduces the players amid a barrage of eye-popping effects. Center stage is the title character played by Alex Brightman (“School of Rock”) as a raspy-voiced and fiendish “emcee,” rather than Keaton’s more mischievous ne’er-do-well.

The first number in a score penned by Australian singer-songwriter-actor Eddie Perfect (“King Kong,” “Moulin Rouge!”), “The Whole Being Dead Thing” is a lengthy tune that incorporates a range of musical styles including death metal, folk, swing and Jamaican ska. It’s performed at the breathless pace that dominates the show, serving as a preview of  the musical’s deadpan humor and its broad array of visual effects, projections and puppetry.

The production’s $21 million budget and eight years of development have clearly yielded a mountain of embellishments for the razor-thin plot and a host of ways to zero in on the target audience. Indeed, excess is the principal problem, from that rapid-fire barrage of special effects to the book’s tiresome dependence on crotch jokes to the abundant slapstick.

There’s only one character who conjures any empathy: the rebellious daughter Lydia, made even more prominent than she was in the film and played here by the talented Sophia Anne Caruso (stepping into a part first played onscreen by Winona Ryder). With an engaging voice and spirited presence, Caruso lights up her scenes and nails her musical assignments.

Brighton, by contrast, wears out his welcome almost instantly his with incessant crudeness, tiresome antics and annoying voice. This stage version of the character could be reined in for everyone’s benefit.

Songwriter Perfect’s score is another trouble spot. There are few melodies of distinction, and at times it musicalizes scenes that arguably could be more effectively conveyed in dialogue. A prime example: the Act Two song in which Lydia and her father (Dannheisser) reconcile over the mother’s death, the evening’s most profound moment.

At least there are those two Harry Belafonte numbers inspired by scenes in the film. “Day-O,” showing up in a late scene at a dinner party, proves delightful. It’s the kind of joy that the WBTV will need to work hard to bring to the rest of the proceedings, before the show lands on Broadway in March.