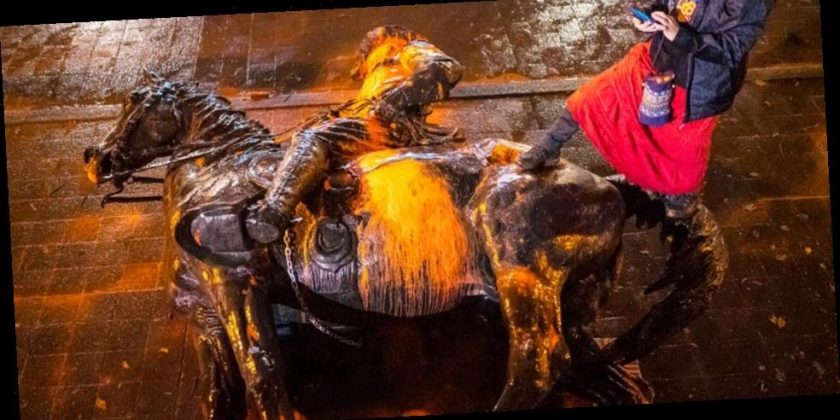 This past Sunday night, protestors toppled statues of former U.S. presidents Theodore Roosevelt and Abraham Lincoln as a declaration of “rage” toward the controversial holiday, Christopher Columbus Day. Organizers called the event “Indigenous Peoples Day of Rage” in response to the federal holiday named after the 15th-century Italian explorer Christopher Columbus — a polarizing figure who Native American supporters have claimed spurred centuries of genocide against Indigenous populations in the Americas.

“There are three main sources of controversy involving [Columbus’] interactions with the indigenous people he labeled ‘Indians’: the use of violence and slavery, the forced conversion of native peoples to Christianity and the introduction of a host of new diseases that would have dramatic long-term effects on native people in the Americas,” as reported by History.

Protestors threw chains around the Roosevelt monument in Portland, Oregon, officially titled “Theodore Roosevelt, Rough Rider.” They also splattered red paint on the statue and blowtorched the figure’s base as reported by multiple news outlets including the New York Times. The crowd overturned the statue around 9 p.m. and later directed their attention towards Lincoln’s statue, toppling it eight minutes later. Protesters tagged “Dakota 38” on the base of Lincoln’s statue, referencing the 38 Dakota men Lincoln approved to have hanged after they were involved in a violent conflict with white settlers in Minnesota.

After tearing down the statues, the protestors began breaking windows at the Oregon Historical Society and also marched to the Portland State University Campus Public Safety office. Local authorities called the event a “riot” and claimed that anyone involved in “criminal behavior, including vandalism” was subject to arrest. It’s currently unclear if any arrests were made.

The Lincoln and Roosevelt monuments are the latest to come down following a wave of toppled statues and protests triggered by the death of George Floyd in Minneapolis police custody back on May 25.
Source: Read Full Article