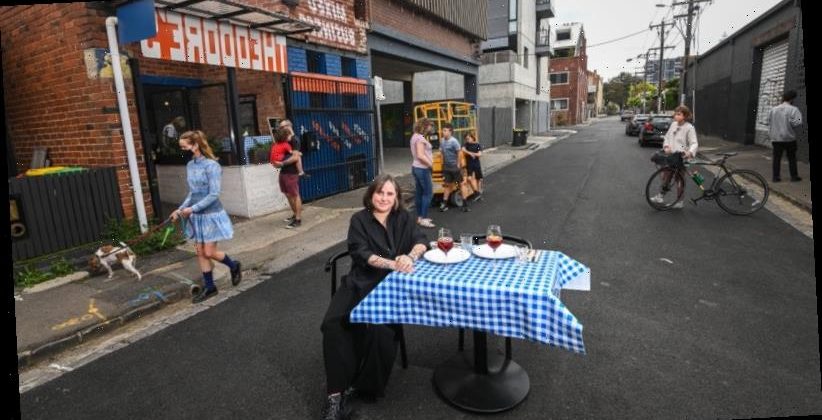 Save articles for later

Add articles to your saved list and come back to them any time.

Before the pandemic, Melbourne business SpaceCube's six-metre-long shelters were mostly used in events like the Melbourne Cup or the Australian Open.

The pods are a few centimetres longer than the average car parking space – which is why, after Premier Daniel Andrews announced last month that restaurants and cafes would be able to reopen using outside spaces, orders came thick and fast. 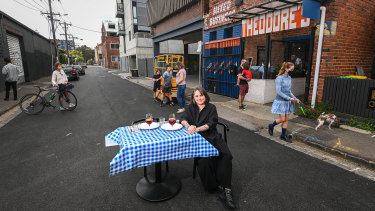 Lily Stokes from Brunswick restaurant Theodore’s, in the dead-end street the venue hopes can accommodate up to 50 patrons when hospitality reopens.Credit:Justin McManus

“Every business we help get open is saving jobs right now,” SpaceCube chief executive Mark Davies said. His company has been installing the shelters on streets and open spaces before the expected reopening on November 2.

All over Melbourne, food and drink operators are focused on getting their doors open, even with fears of a repeat lockdown looming over them.

Venues are allowed limited inside seating – 10 people per inside room, capped at 20 people no matter how many rooms – and up to 50 outdoors if you can provide two square metres of space per person. 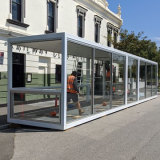 “The foot traffic is much lower," he says. "It will be busier," he said hopefully, as a result of Monash Council's installation of barriers in car parking out front, allowing him 24 chairs.

He’d like music too – "some kids with guitars strumming away" – but local bylaws stop even acoustic music outside. "It’s crazy. People would love to hear some music and feel the life of the city again.” 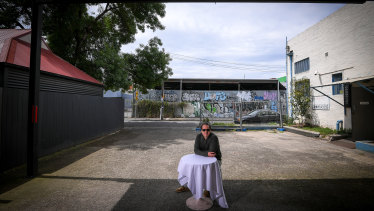 Justin Stanford in what’s now a nine-car parking lot, soon to become an open-air space for visitors to his venue, The Night Cat in Fitzroy.Credit:Eddie Jim

Almost every operator interviewed for this story both welcomed and worried about an opening earlier than November 2.

“You’d just rather know the date and work towards it,” Mr Maccarone said. “But it’s sort of exactly what the year has been like: constant uncertainty.”

That uncertainty cost restaurants across the city thousands of dollars each – sometimes tens of thousands – in spoiled food or unreturnable stock when forced to shut in July. 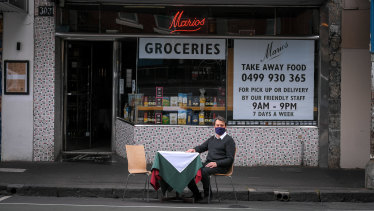 Mario Maccarone from Marios in Fitzroy, which is taking over two on-street parking bays in front of their cafe, and the neighbouring bookshop.Credit:Eddie Jim

Among them was Brooke Pollock, whose live music bar Arcobar in Heatherton, was savaged. This time, the venue has bought new outdoor furniture to use in what's normally a loading dock. “Really classy; we’ve turned our driveway into an eating area,” she joked.

The cost of restocking before reopening is massive for some, too. Take South Melbourne publican and former AFL footballer Paul Dimattina, facing costs he estimates at $50,000 to $60,000 to fill his fridges.

Mr Dimattina, among a group of signatories to "Victoria, Let's Be Open" ads running in Sunday papers in recent weeks calling for immediate re-opening, has installed a sprawling marquee over four car spaces in front of his gastro-pub, Lamaro's.

“It’s like they would normally set up down at Flemington for the birdcage,” he said of the 10-metre-long structure. 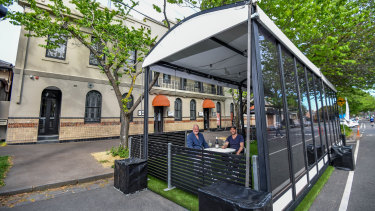 For some in hospitality, the real worry isn't re-opening, when everyone will be keen to visit a restaurant. “If we don’t start to open up the city, there won’t be any longevity in it," said Elizabeth Rodriguez, from city-centre restaurant Grossi Florentino.

Some in the industry hope permanent changes end up benefitting both them and locals, by reactivating dead spaces. Lily Stokes from Brunswick cafe Theodore’s is hoping the upside is chairs and tables permanently on their dead-end street. Moreland Council has given a verbal OK to seat up to 50 outside.

Diners will need to be ready for a different feel, with staff in masks, and customers, too, unless they're eating or drinking. “It’s not just a regular restaurant opening,” Ms Stokes said.

SpaceCube’s Mr Davies agrees hospitality will look different, and with so much of it outdoors, Melburnians will need to be especially tolerant.

“Once upon a time we would've said ‘These people are encroaching on our footpath too much’. For that 30 or 40 centimetres of space they'll be taking for each chair or table, if that means someone stays afloat, that’s the level of tolerance we need to show now.” 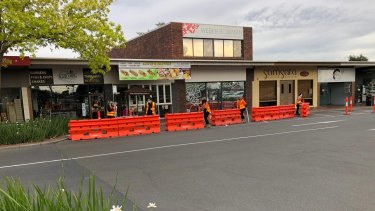