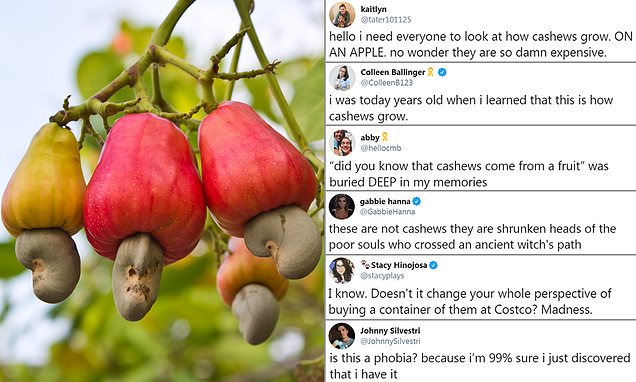 ‘No wonder they are so expensive!’ Twitter is left STUNNED after YouTuber revealed how CASHEWS grow, as most confess they had no idea the snacks come from the bottom of a fruit

The internet made people a little bit more aware of where their nuts come from after one woman shared a picture of how cashews actually grow — and it has left Twitter users in shock.

On Wednesday, YouTuber Colleen Ballinger tweeted about how she had just discovered cashews grow on cashew trees out of the bottom of cashew apples.

‘I was today years old when i learned that this is how cashews grow,’ Colleen wrote while sharing a picture of cashews growing out of the bottom of fruit. 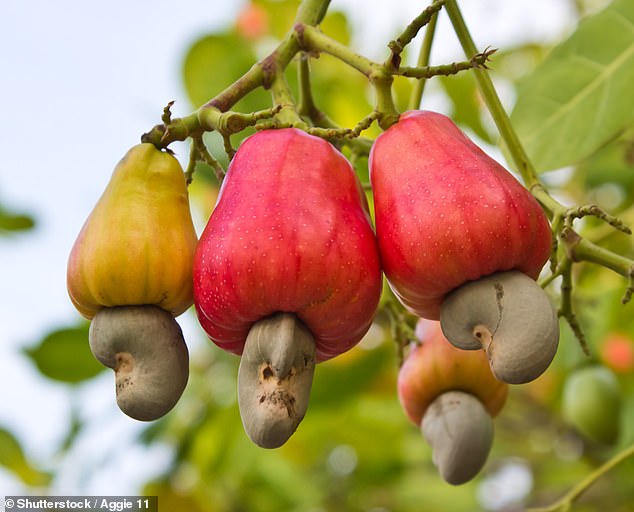 Insane: She shared an image of the cashew growing out the bottom of a cashew apple

Makes sense: The information made people online joke about the cost and if they could actually picture themselves purchasing the nut now

Her tweet quickly went viral and received more than 80,000 likes as others decided to comment their thoughts on the way cashews grow.

‘Hello i need everyone to look at how cashews grow. ON AN APPLE. no wonder they are so damn expensive,’ one person wrote following the news.

Other people were in agreement about the price of cashews, with some saying it might impact their purchasing decisions in the future.

‘Doesn’t it change your whole perspective of buying a container of them at Costco? Madness,’ the Twitter user wrote.

Pictures showing cashews on trees sparked an interest from people online to learn more about where their favorite nut comes from, and it was discovered it isn’t even a true nut.

Cashews are actually seeds that grow from a tree, which are native to Brazil.

They grow in a shell that is then attached at the bottom of the cashew apple. People will pick the entire apple and then remove the cashew for consumption.

People online could not get over the discovery of where cashews actually originate, specifically what they look like growing from the cashew apple.

‘Is this a phobia? Because I’m 99% sure I just discovered that I have it,’ one person wrote.

Another person joked: ‘These are not cashews they are shrunken heads of poor souls who crossed the ancient witch’s path.’

With the information, this led some people to being concerned about the effort involved just to grow one cashew.

‘Yo, if one fruit produced one cashew, I really don’t wanna know what kind of science is creating them in mass quantities lol,’ a commenter wrote.