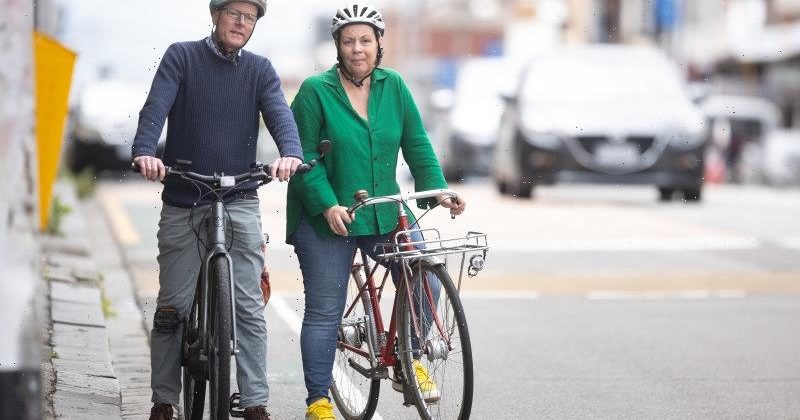 Debate over the future of one of Melbourne’s busiest arterial routes – Sydney Road in Brunswick and Coburg – will ratchet up a notch on Friday with a peak-hour protest by hundreds of cyclists who want cycle paths and wider footpaths.

Greens MP for Brunswick, Tim Read, who is running for re-election next Saturday in one of the state’s most marginal seats, will join the event on his bicycle. And he will come armed with new Parliamentary Budget Office figures released to the Greens that show Labor’s planned removal of eight level crossings on the Upfield train line in Brunswick will cost $1.36 billion. 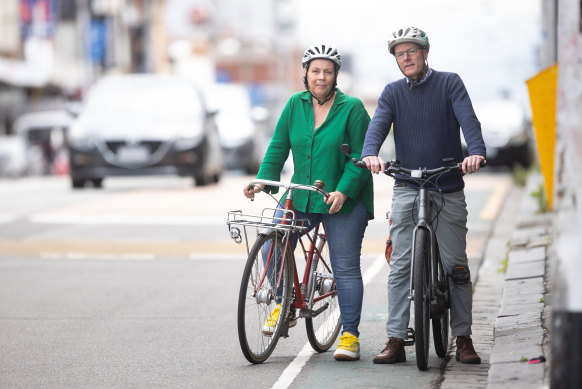 That railway line runs parallel to Sydney Road and has a popular bike path used by 2500 cyclists a day. The cycle path will shut while the level crossings are removed and an elevated train line is built, in a project announced by Premier Daniel Andrews in September.

When asking for costings on the level crossing removals – which the Greens support – the party also asked the budget office to estimate of the cost of redesigning Sydney Road.

Under the plan the Greens asked the budget office to cost, the two-lane Sydney Road (one lane is dedicated to parking except during clearway times in the morning and afternoon rush hours) would be rebuilt with wide footpaths, disability-accessible tram stops and dedicated cycling lanes.

The Parliamentary Budget Office found the works would cost $49 million, slightly more than 3 per cent of the cost of the level crossing removal.

“The cost of these upgrades is probably little more than the communications budget for these level crossing removals,” Read said. “The only reason they haven’t happened yet is politics, not money. Given it adds so little to the cost, building level-access tram stops should be part of the project.”

Sydney Road is one of Melbourne’s busiest arterial roads, with about 19,000 motor vehicles using it each day, Department of Transport figures released on Thursday showed. By comparison, Bridge Road in Richmond and High Street in Prahran both average 18,000 vehicles per day.

Over the five-year period ending in December 2021 there were 73 reported crashes involving cyclists on Sydney Road between Bell Street and Brunswick Road – 22 of them resulting in serious injury.

And in 2015 a 25-year-old Italian visitor, Alberto Paulon, was cycling on Sydney Road in Brunswick when a motorist opened their door, knocking him under a passing truck. Paulon, who was riding to work with his fiancee, died. 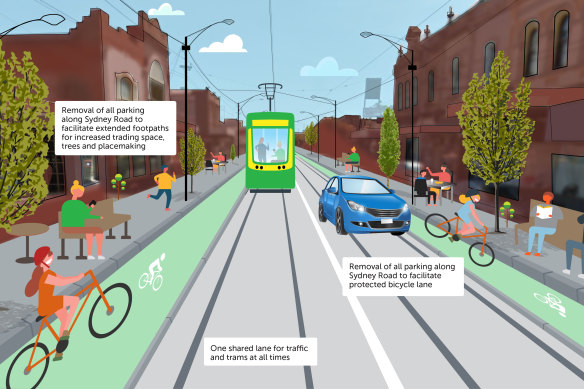 Options for overhauling Sydney Road released in 2019 by the state government included this one with wider footpaths. Credit:VicRoads

Read said the closure of the Upfield cycling path during the construction of the elevated rail line meant riders needed an alternative route. “Building safe bike lanes, accessible tram stops, and wider footpaths with space for trees or street furniture would make it a more attractive destination rather than just a traffic sewer.”

Williams said any significant changes to Sydney Road, including reallocating road space to provide protected bicycle lanes, would “need careful consideration and investigation to strike a balance between the needs of all transport users, traders and people who live in the community”.

The Age approached the Sydney Road Brunswick Association for comment. 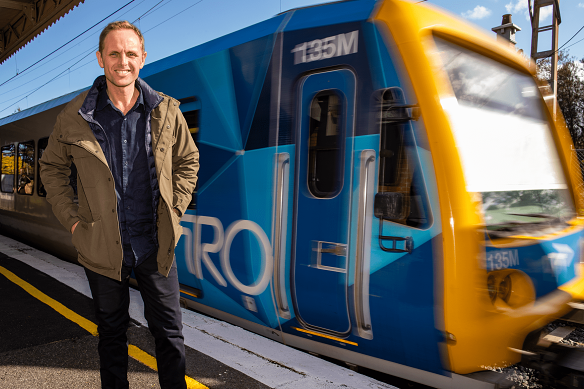 Manager Troy Stuchbree declined to say whether removing parking on the strip would be good for businesses, explaining that he could not comment on a political issue.

The level crossing removal project in Brunswick is scheduled to take until 2027 to complete.

Level Crossing Removal Project program director Andrew Pepplinkhouse said the project was only in its planning phase, and that no construction contract had yet been awarded yet. He said that the impact on the cycling path on the Upfield cycling path was not yet clear.

The recent removal of four level crossings in Coburg – which won a Planning Institute award this week – saw the Upfield cycling path in that area shut for more than a year.

The “Critical Mass” cycle protest will start at 5pm at the State Library, ride down Royal Parade – where organisers also want Melbourne City Council to install protected bike lanes – and is scheduled to finish in a Brunswick park on Albion street about 6pm.

Among the organisers of Friday’s event is Faith Hunter, the convenor of the Merri-bek Bicycle User Group. She said the ride aimed to highlight the need for a safe and accessible Sydney Road for all forms of transport.

“Without accessible tram stops and protected bike lanes that are safe for everyone in the community to use, Sydney Road is missing out,” Hunter said.

In 2019 the transport department established the Sydney Road Improvement Project, and among the projects it considered was the removal of all on-street parking, the extension of footpaths and the installation of protected separated bike lanes.

Among five options presented to locals, this was the one that garnered the most support. Then Roads Minister Jaala Pulford told parliament in 2019 that redeveloping Sydney Road would not proceed without a business case, and would not occur until after the Coburg level crossing removal project.