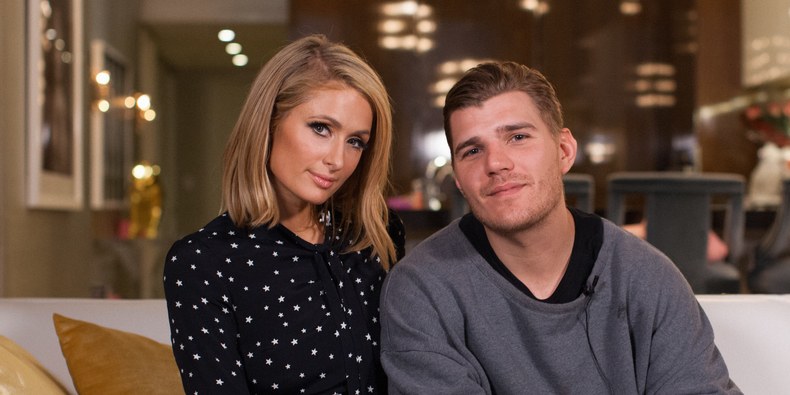 Nearly two years after Paris Hilton and the actor-artist Chris Zylka began dating, this Monday brought news that they'd called off their engagement earlier this month and are no longer a couple. That gossip seems to be legitimate, given that Hilton has yet to refute the report even while she's been extremely online, promoting the launch of her 24th fragrance in Dubai in the early hours of the morning following the news. Oh, and she also appears to have deleted every photo of Zylka that she's previously posted to her feed (which essentially acted as Zylka's social media presence over the course of their relationship, seeing as he doesn't use Twitter or Instagram.)

Hilton soon made up for their absence by simply posting more, promoting her trip to Dubai to Instagramming another photo: one of her signature sparkling GIFs, featuring a black-and-white photo of herself with platinum blonde, Marilyn Monroe-style curls. The caption, appropriately enough, featured her "favorite Marilyn Monroe quote." (Though it appears to be one of the many quotes misattributed to Monroe over the years.) Sandwiched between two sparkle emojis, it read: "I believe that everything happens for a reason. People change so that you can learn to let go. Things go wrong so that you appreciate them when they're right. You believe lies so you eventually learn to trust no one but yourself. And sometimes good things fall apart so better things can fall together."

My favorite Marilyn Monroe quote. ✨”I believe that everything happens for a reason. People change so that you can learn to let go. Things go wrong so that you appreciate them when they're right. You believe lies so you eventually learn to trust no one but yourself. And sometimes good things fall apart so better things can fall together.”✨

Given the timing and Zylka's sudden disappearance from her grid, it seems pretty clear that the quote was intended as Hilton's response to the breakup (at least for the time being). If so, it doesn't seem like things ended on a bad note. Indeed, according to Just Jared's source, the pair plans to carry right on with their lives as usual, before Hilton began taking meetings with the many designers who were aiming to design her wedding dress: "Paris will be focusing on her brand like DJing and fragrances while Chris will get back into acting and art, like his gallery pop-ups with Banksy during Art Basel." In addition to being an actor, who most recently appeared in Xavier Dolan's The Life and Death of John F. Donovan, Zylka is also an artist, who's long admired Banksy's work.)

Hilton also posted another telling snippet five hours after Just Jared's story went up: a short black-and-white clip of herself posing, captioned "Miss Independent." She has yet to address the fate of her $2 million engagement ring, which has already had quite the life: Zylka feared he would lose it on the slopes of Aspen when he proposed to Hilton earlier this year, and just a few months later, Hilton had to shut down a club in Miami to recover it when it flew off her finger and onto the dance floor. It seems that Zylka is stuck with his own souvenir from the relationship as of now, too: a sizable tattoo on his forearm, spelling out Hilton's first name in Disney font.

Related: Paris Hilton and Chris Zylka Present: A Completely True Guide to Their Relationship, which Started Over Text

Paris Hilton and the actor-artist Chris Zylka reportedly called off their engagement in November, bringing their two-year relationship to an end. After meeting at Art Basel Miami and keeping in touch via text, the pair went on their first date—the actual first time around, since, as Zylka told W earlier this year, "I got so nervous that I cancelled and said I was sick." According to him, at least as of this past March, they hadn't spent more than four hours apart from each other since that first date, making it only natural that Zylka proposed to Hilton with a $2 million ring earlier this year. Having called things off, things are reportedly back to usual for the pair: "Paris will be focusing on her brand, like deejaying and fragrances, while Chris will get back into acting and art, like his gallery pop-ups with Banksy during Art Basel."