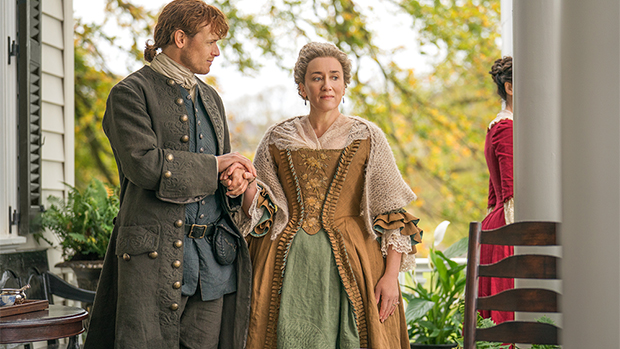 Aunt Jocasta is one of the many new characters in ‘Outlander’ season 4. Here’s what you need to know about the character and the amazing actress who plays her!

Outlander season 4 is going where it’s never gone before — America. Jamie (Sam Heughan) and Claire (Caitriona Balfe) have traveled across the sea from Scotland to America where they cross paths with Jamie’s Aunt Jocasta (Maria Doyle Kennedy). She lives in North Carolina, and that’s where Jamie and Claire will be settling down for now.

Jocasta, who is a character from Diana Gabaldon’s Outlander books, will make her debut in the second episode of season 4. Jocasta is going to have a major presence this season on Outlander, which airs Sundays at 8 p.m. on Starz. Get to know her with these 5 key facts!

2. Jocasta has the ability to “manipulate others.” Starz released the following character description for Jocasta ahead of season 4: “When Jamie and Claire pay Jamie’s Aunt Jocasta a visit, she is over-joyed to reunite with her nephew and have kin near her again. For the past two years, she’s had the herculean task of managing her plantation, River Run on her own, after her husband Hector passed away. Jocasta takes great pride in what she and Hector built together, believing that she is a benevolent mistress. While Jocasta’s eyesight has weakened, her wit and intelligence are as sharp as ever. She possesses a cunning ability to manipulate others, subtly bending them to her will — a MacKenzie trait that she shares with her brothers’, Dougal and Colum, who also have a history of exploiting their nephew Jamie when it suited their interests.”

3. You’re probably going to be seeing a lot more of Jocasta. The character is first introduced in the fourth book in Diana’s Outlander series, Drums of Autumn, but she also appears in The Fiery Cross and A Breath of Snow and Ashes.

4. Jocasta is played by a well-known actress. Maria Doyle Kennedy has starred in a number of projects over the years. She notably played Queen Catherine of Aragon on The Tudors, as well as Siobhan Sadler on Orphan Black.