When foodie legends Stephanie Alexander and Maggie Beer heard someone wanted to make a movie about them, they couldn’t quite believe it. 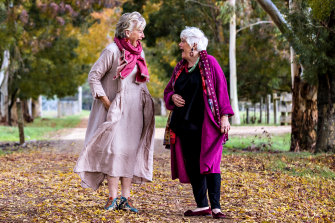 “But we also thought it was fun, and we knew it was a good story, a story about friendship,” adds Alexander. “We’ve got over the dropped jaws now.” 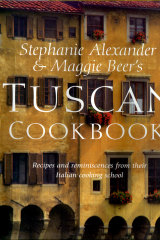 Originally published in 1998, the pair’s Tuscan Cookbook has inspired a planned feature film.

The project is in the early stages, with screenwriter Katherine Thomson (House of Hancock, A Place to Call Home) having interviewed the pair about their friendship, which dates back to a chance meeting at the first symposium of gastronomy in Adelaide in 1984 (“I was frightened of Stephanie,” Beer remembers), and especially about the three months in 1997 when they relocated to a medieval villa in Tuscany to run a cooking school for Australians.

“We’d had a holiday with some friends in Umbria two years before,” Alexander recalls, “and we’d loved setting up house in Italy and enjoying the markets and the shopping and the people so much that Maggie and I said to each other, ‘How can we organise to come back here for longer? How can we do it?’”

“And how can we afford to do it,” adds Beer, “in terms of time away, expense, etcetera. So that was where the idea of the cooking school came in. But it took 18 months of planning and finding the right place.”

Alexander and Beer’s excellent adventure – three groups of students for nine days at a time, with only a day or two to recuperate and plan between them, followed by what Beer calls a three-week “house party, with revolving doors and various friends” – yielded two books: Tuscan Cookbook, co-authored by the pair and eventually translated into numerous languages (including, to their delight, Italian); and Stephanie’s Journal, an account of a year of major upheaval in her life that included the difficult decision to close her award-winning Melbourne restaurant.

Now, boutique production and distribution company Arcadia, based in Orange, NSW and responsible for the Netflix film 2067, has optioned both those books, with the plan to make a movie to be filmed, if all goes well, next year – in Italy, of course.

Think of it as a Best Exotic Marigold Cooking School, if you will, sprinkled with colourful guest characters but revolving around the two women and their shared love of hospitality.

“It’s a story about how friendships transform us,” says Thomson. “It’s a story of two women on the cusp of some very challenging decisions, set against the backdrop of Tuscany.”

It won’t all be Chianti and laughter, though, as their bond comes under pressure from the strain of all those guests, and the looming life changes that await upon their return to Australia.

“They’re very different personalities and this could be the time when they split up,” says Thomson. “A female friendship is akin to a love affair and a commitment, and you don’t let your friends go easily, especially when you’re in your 50s as they were then.”

Of course, the first question anyone wants answered is who will play these titans of taste? 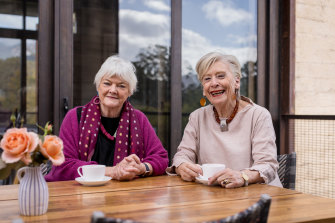 ‘We knew it was a good story, a story about friendship,’ says Alexander.Credit:Jason Robins

“That’s become our parlour game,” says Alexander. “A lot of names have been tossed around, and after a couple of drinks they get more extreme.”

“You’ve got to remember we were 25 years younger,” says Beer. “So, you know, that’s a very particular casting net that can be put out.”

The choice won’t be theirs, of course, but if it were, which big fish would they most like to land?

“Well, I can say that my neighbour rather fancied Miranda Otto for me,” says Alexander.

“And my husband Colin thought Claudia Karvan for me,” says Beer, “which I thought was the most beautiful compliment in my life”.