Senators Lidia Thorpe and Amanda Stoker have clashed over whether the Aboriginal flag has been “colonised”, as more details have been revealed over the federal government’s $20 million deal to acquire the flag’s copyright.

The government announced it had reached a $20.5 million dollar deal to secure the copyright in January after a years-long legal controversy over the use of the Aboriginal flag. 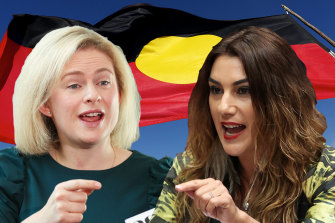 Senators Amanda Stoker and Lidia Thorpe have clashed over the government’s decision to buy the rights to the Aboriginal flagCredit:Alex Ellinghausen, digitally altered

In Senate Estimates on Friday, Greens Senator Lidia Thorpe said many Indigenous people were concerned the government now owned the copyright and asked whether it was time to begin a discussion about sovereignty.

“The people I am bringing voice to in this place, are very concerned that our flag has been colonised given this is the colonisers’ headquarters, and they’ve just purchased our flag,” Senator Thorpe said.

But Senator Stoker, who was representing the Minister for Indigenous Australians Ken Wyatt, denied that the government had "colonised" the flag.

Blair Exell from the National Indigenous Australians Agency (NIAA) added that they had worked with the flag’s designer, Luritja man Harold Thomas, on reaching a satisfactory deal.

"Mr Thomas retains the moral rights of the flag, so in terms of that some of that framing he's still the creator, what we're talking about here is the purchase of the copyright," he said.

However, the committee grew heated after Senator Thorpe quipped that the flag was now “Australian”, prompting Senator Stoker to respond that it was now “just like all Indigenous people”.

"I think it is an uncontroversial proposition that Indigenous Australians are Australian," Senator Stoker said.

“I’m being whitesplained, I’m not going to be told by a white senator that I’m an Indigenous Australian, that is insulting,” responded Senator Thorpe, who is a DjabWurrung, Gunnai and Gunditjmara woman.

The NIAA also revealed further details of the copyright deal to purchase the flag, including how much was paid to its designer.

Mr Thomas was paid $13.75 million by the federal government for the copyright. A further $5.2 million was paid to non-Indigenous company WAM Clothing, which had been granted exclusive use of the flag in 2018.

Mr Exell also confirmed the NIAA had spent roughly half a million dollars in legal fees.

As part of the agreement, all future royalties will go towards the National Aborigines and Islanders Day Observance Committee (NAIDOC), and an annual $100,000 dollar scholarship for Aboriginal and Torres Strait Islander students to further the development of Indigenous governance and leadership will be established.