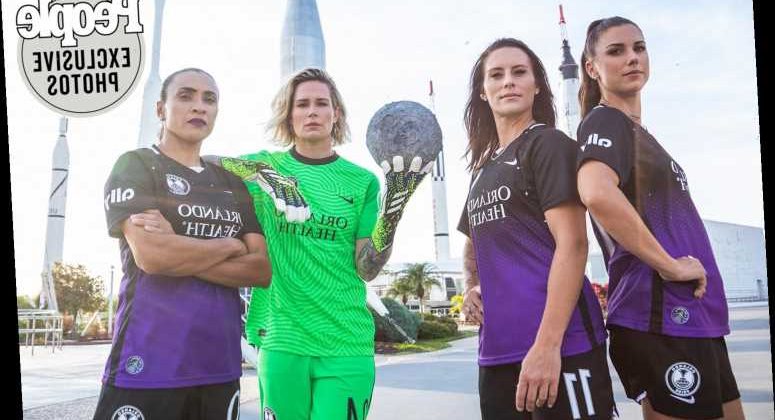 Ashlyn Harris wants girls, including newborn daughter Sloane, to know they can do anything — and her team's new jersey is paving the way.

Harris, the star goalkeeper for the NWSL's Orlando Pride, gave PEOPLE an exclusive look at the out-of-this-world "Ad Astra" jerseys the team will be wearing on the field this year. The black-and-purple jerseys feature star patterns that pay tribute to the previously unsung female heroes that helped NASA reach the moon.

To commemorate the new kit, Orlando Pride and its presenting partner, Orlando Health, launched one of the jerseys into space.

"It's really just paying tribute to the women who've broke all these barriers, who are trailblazers at this point, who've inspired an entire generation of women to do these incredible things that, maybe a long time ago, they thought men only were in these roles," Harris, 35, tells PEOPLE. "I think the whole entire platform of what Orlando, like Orlando City and Orlando Pride and Orlando Health, is doing, it's just been a really incredible nod at a lot of incredible women." The team unveiled the jerseys with a shoot at — where else? — the Kennedy Space Center, the site of some of the most historic space launches that's only a few hours from the team's stadium in Orlando.

All four have been instrumental in growing the women's game off the field, a mission Harris continues to find motivation in over a decade into her professional career.

"I feel like soccer is only going to give you so much in return, especially doing it for so long. I think for me, the game is what I love clearly. But the connections are what keeps me here, and inspiring the next generation of young boys and girls, and inspiring and standing up for trans children and LBGTQ+ communities that have been left behind a lot," she says. Another huge motivation? Her newborn daughter. Harris and Krieger announced Sloane's birth earlier this year on Instagram with a beautiful note to the baby's birth mother.

"Now having a child who is Black and Caucasian and Puerto Rican, I need to make sure she sees how incredibly beautiful she is," Harris says, "and how she's going to be able to explore and do whatever she's sees fit. Literally, the moon and stars are the limit. Whatever she wants to do, she's going to be able to, if she truly believes she can do it. And I have to continue to pave the way and create the space for children like her to shoot for the stars."

The Orlando Pride will first compete in the NWSL's Challenge Cup beginning on April 9, a special tournament that divides the leagues 10 teams into East vs. West with the top teams of each division playing for the cup at the end.

The Pride's first game will take place on April 14, when the team hosts Sky Blue FC at home.

The league will then head into a regular season on May 15 before the championship game takes place on Nov. 20.