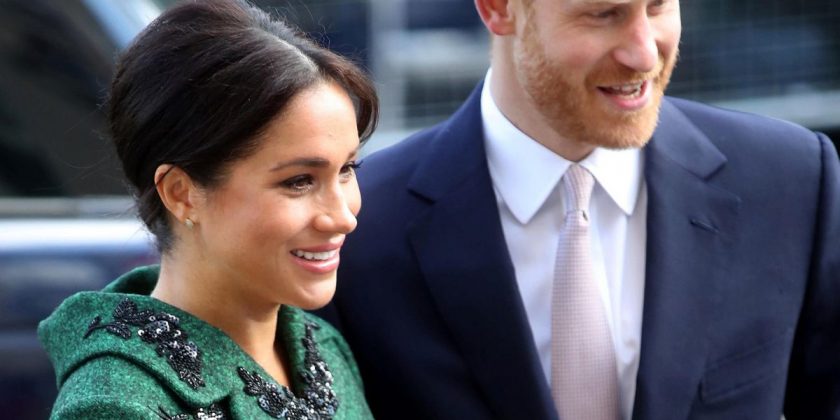 A beaming Prince Harry gushed with pride as he told the world about his new baby son.

He is the couple's first child and the Queen and Prince Philip's eighth great-grandchild.

Meghan and Harry broke with royal protocol and announced before their son was born that they would celebrate as a family before introducing him to the world.

The baby's name has not yet been announced, and if the couple follow in the footsteps of the  Duke  and  Duchess of Cambridge  we could be waiting a few days to find out.

A delighted Prince Harry said: ""I'm very excited to announce that Meghan and myself had a baby boy this morning, a very healthy baby boy."

A smiling Harry added: “It’s been the most amazing experience I could ever imagine.

“How any woman does what they do is beyond comprehension. It was amazing, absolutely incredible.

Harry was at his wife's side as she gave birth to their son at the couple's Frogmore Cottage home in Windsor.

Meghan's mum was also present and was included in the official announcement of the baby's birth from Buckingham Palace.

It said: "Her Royal Highness The Duchess of Sussex was safely delivered of a son at 0526hrs.

"The baby weighs 7lbs 3oz. The Duke of Sussex was present for the birth.

"The Queen, The Duke of Edinburgh, The Prince of Wales, The Duchess of Cornwall, The Duke and Duchess of Cambridge, Lady Jane Fellowes, Lady Sarah McCorquodale and Earl Spencer have been informed and are delighted with the news.

"The Duchess's mother, Doria Ragland, who is overjoyed by the arrival of her first grandchild, is with Their Royal Highnesses at Frogmore Cottage.

"Her Royal Highness and her child are both doing well."

But one of the newest royals closest relatives was not mentioned – his grandfather and Meghan's dad, Thomas Markle.

Meghan and Thomas' relationship has been strained since before her wedding to Prince Harry last year.

He was not there to walk his daughter down the aisle after suffering health problems and being accused of staging press photos.

But Thomas has been "clinging to hope" that she will reach out to him after the arrival of her first child.

Thomas Markle is "bitterly upset" at the idea of not meeting his grandchild and hopes Meghan will give him the opportunity at some point.

According to a friend he doesn't now what else he can do to repair their relationship and hopes the duchess will decide to give him another change after the baby arrives.

The pal told the Express: "He'd give anything to meet the new arrival in person and hopes he can prove to his daughter that their relationship is worth a second chance and he should have a place in their lives.

"He is still clinging to the hope his daughter will call him at some stage to share her happiness.

"He has said, ‘What else can I do?’ He is bitterly upset by the thought of not being able to meet his new grandchild.

"The distance in miles and emotions between him and Meghan hasn't stopped him feeling proud for her and his new grandchild.

"He'd give anything to meet the new arrival in person and hopes he can prove to his daughter that their relationship is worth a second chance and he should have a place in their lives."

The friend also revealed that Thomas plans to celebrate the birth with a few beers at his local beach bar.

Earlier this year Thomas shared extracts of an emotional letter the Duchess of Sussex had written to him shortly after her wedding.

In the five-page handwritten note Meghan begged her father to stopped speaking to the media and pleaded with him to allow her to live her own life.

Before publishing extracts of the letter, Thomas Markle Snr has given numerous interviews claiming the Duchess has completely cut him off and wasn't responding to his messages.