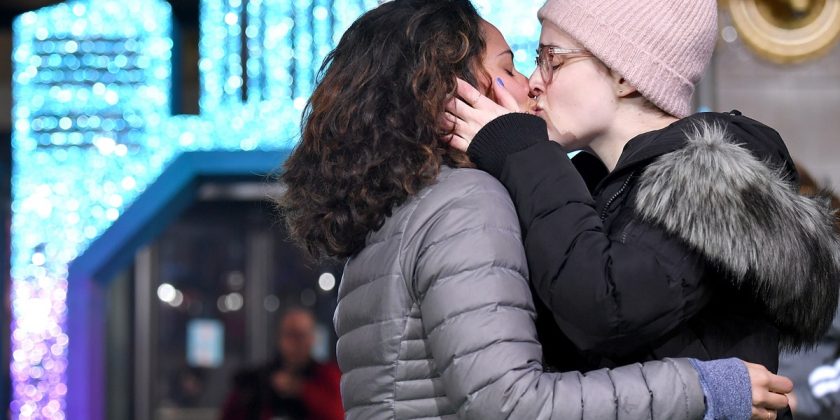 History is happening in Manhattan thanks to The Prom on Broadway, you guys. The new musical’s performance on NBC this morning just gave us the first ever LGBT kiss on the Macy’s Thanksgiving Day Parade — right before our eyes. The actors looked freezing, donning party dresses in record low temperatures, but it was totally worth it.

The Prom, which just opened on Broadway in October, is not based on any one true story — but inspired by LGBT youth across the country that have to fight teachers, parents, and school boards just to bring the date the want to at the glitsy rite of passage. So the show is basically like Footloose or Hairspray for 2018. When a girl wants to bring her girlfriend to prom and faces blowback from small-minded adults, she calls in backup from the Great White Way. Minds are changed, and plenty of shenanigans ensue along the way as well.

The musical had a successful out of town tryout in Atlanta way back in September 2016 and has finally made it to the New York stage. The original Broadway cast recording is not out yet, but you can preorder the album now — and a couple of the songs, including what they performed at the parade, are on Spotify.

The show stars Caitlin Kinnunan and Isabelle McCalla as the young lovers in question, as well as musical theater favorite Beth Leavel, Brooks Ashmanskas, and Christopher Sieger. Casey Nicholaw is the show’s director choreographer, who along with book writer Bob Martin also brought the meta-musical The Drowsy Chaperone to life on Broadway. The music, by the way, is by the composing team behind the musical adaptations of Elf and The Wedding Singer, Matthew Sklar and Chad Beguelin. They know how to make you want to get up and dance.

Honestly, it’s revolutionary enough that the Macy’s parade chose to feature a Broadway musical that’s not based on a cartoon (never forget the online reactions to Spongebob last year) or a revival of an old classic that will make your grandparents loudly say "they just don’t make musicals like that anymore." The fact that The Prom started the parade off with a cheerful message proclaiming that love is love (is love is love is love) was pretty incredible.

Twitter, unsurprisingly, was a flood of positivity at the kiss and the performance itself.

Can we also talk about the blazers and tennis shoe representation at this prom? These youths know how to dance.

I’m going to warrant a guess that the number they performed on the parade is from the end of the show — but the show should have a happy ending, so I’m not even mad about the spoiler.

Live in New York? Booking a vacation and inspired to see this show while in town? The Prom is playing at the Longacre Theatre, that’s where you’ll find this charming story. This certainly won’t be the last you hear from the buzzy show, either, especially after making such a splash. Tony Awards, here they come!