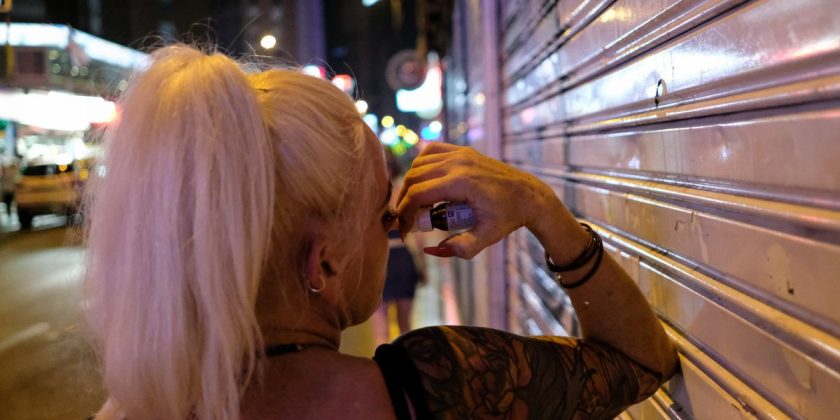 Older Brits are causing chaos in the popular party town of Benidorm with marathon drink, drugs and sex sessions, a Mirror investigation can reveal.

The famous Spanish seaside resort on the Costa Blanca has long been popular with British tourists. But now the generation who enjoyed Club 18-30 holidays back in the 70s and 80s are reliving their party exploits in increasing numbers.

One grandmother, a dinner lady from Yorkshire in her late 50s, boasted to us how she smuggled cocaine into the resort in a sinus inhaler while wearing a t-shirt that read ‘Coke Whore’.

She said: “It’s easy, no one thinks to check the tube in the inhaler amongst all my pills, although the drugs are cheap enough here to be fair.”

Cocaine, ecstacy and marijuana were all on offer throughout the day and it was not unusual to be offered drugs while out for lunch or simply taking a stroll along the sea front.

Our reporters watched on as carefree OAPs played bingo in the day, travelling around on their two-seater mobility scooters, and then partied into the night on the infamous English Square.

Here hoards of British tourists come to party together with stag dos mixing with families while strippers on outdoor podiums perform in front of everyone, young or old, throughout the night.

The resort has 2,305 full time British residents which is 11 per cent of the total population.

Many of them are older and have been coming out to Benidorm for more than 30 years.

Betty Thirlwall, 66, told us: “You have everything you could want here, sun, sea and booze – if you can make it over, why would you ever leave, people love it.”

Pensioners like Betty have seen the resort change over time from the 1980s when it was notorious for drunken yobbery to now when it has become synonymous with elderly Brits thanks to shows like ITV’s Benidorm.

But you do not have to scratch below the surface far to discover that a seedy underbelly still exists with drugs, sex shows and prostitution all readily available.

The sordid cabaret shows revolve around the clubs during the course of the night and all are free to watch.

There are a wide variety to choose from but all ensure the popular bars like Chaplins and the raucous The Red Lion pack in the punters into the early hours.

One man on a stag do said: “I thought Benidorm was going to be boring like that TV show – I did not expect to see Darth Vader have sex.”

Others included the daughter of the infamous Sticky Vicky who performs a uniquely talented stage act carrying on from where her mother left off.

The lesbian show at Chaplins escalates quickly into crowd participation and it was not long before tourists were being stripped, and whipped on stage in front a a crowd of giggling tourists.

But as sordid as those shows may seem to some the revellers watching them insist it was just a bit of fun.

Darren Smith, 38, from Liverpool, said: “This is what you come here for, you know what you are in for when you walk through the door, it’s just a load of harmless fun at the end of the day and no one gets hurt.”

Elsewhere on the eastern end of Calle Gerona, the strip of bars where most of the Brits congregate to get drunk at night, the scene can take a darker turn.

Prostitutes ply their trade openly on the street and drug dealers have no qualms about dealing in broad daylight in front of family restaurants.

We were continually offered sex by eastern european hookers up and down the Calle Gerona, many of whom would offer to take us to back alley for as little as €60.

The locals seem to take these murky drug sellings in their stride and the Spanish police appear to ignore them completely.

One resident, who did not want to be named, believes the reason they turn a blind eye is because it does not effect the Spanish.

He said: “All the Brits congregate down here (Calle Gerona) while all the Spanish tourists mainly keep to the old town so it’s always seemed to have been a case of as long as it does not hit the Spanish families then the Brits can take care of themselves, that is nothing new, just look at how hard we had to complain for them to do something about the pickpockets.” Indeed a growing threat to tourist in recent months have pickpockets are targeting Brits in in a systematic manner.

The sneaky thieves, who lurk in nightclubs and alleyways operate in pairs and wait for drunk tourists to pass before making their move.

Only last week Spanish police launched a crackdown on the crooks after a spate of robberies lead to a flood of complaints leading to four arrests.

A total of 74 phones were recovered and two women and two men arrested, of Spanish and Moroccan nationalities, aged between 19 and 25.

A similar group was nabbed last year after stealing 64 phones worth 30,000 euros.