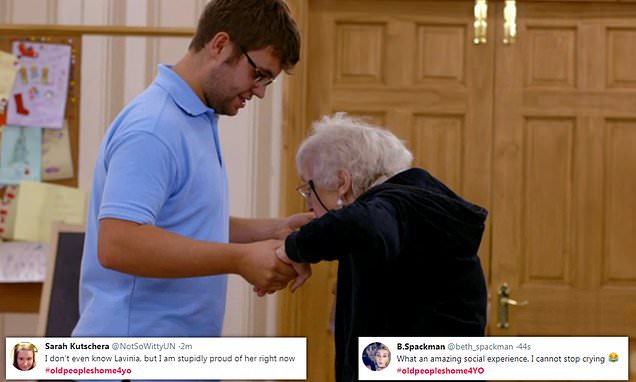 ‘This warms my cold heart!’ Viewers in tears as Lavinia, 81, dances for the first time in a DECADE after Parkinson’s left her bound to a mobility scooter in moving scene on Old People’s Home for 4 Year Olds

Viewers were left in floods watching an elderly woman dance for the first time in a decade during Old People’s Home for 4 Year Olds.

Lavinia, 81, was diagnosed with Parkinson’s disease 20 years ago and has to rely on mobility aids to move around, and admitted that she hadn’t been able to dance in ‘at least 10 years’.

But in heartwarming scenes during Wednesday night’s Christmas special of Channel 4’s social experiment, filmed at Lark Hill Village in Nottingham, Lavinia was able to dance using just the hands of one of the care home’s members of staff for support.

The pensioner said she felt ‘exhilarated’ by being able to dance again and vowed that she wouldn’t let her condition ‘beat’ her.

The emotional scene plucked on viewers’ heartstrings, with one tweeting: ‘This warms my cold bitter heart.’ 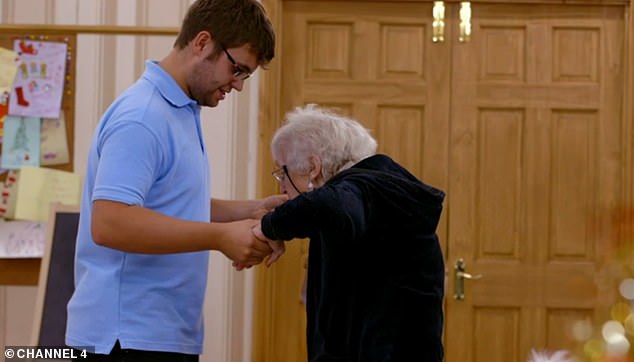 Lavinia, 81, managed to dance for the first time in a decade in tonight’s Christmas special of Old People’s Home for 4 Year Olds (pictured) after she was diagnosed with Parkinson’s 20 years ago

‘I don’t even know Lavinia, but I am stupidly proud of her right now,’ another posted.

A third said: ‘Lavinia. Tough as nails, nothing stops her. Amazing woman who refuses to be defined by her limitations. We can all learn from her.’

‘What an amazing social experience. I cannot stop crying,’ another wrote.

Over the summer, producers conducted a 12-week experiment to give pensioners at Lark Hall Village a new lease of life, building on studies that show mixing children with older people has huge benefits for both age groups. 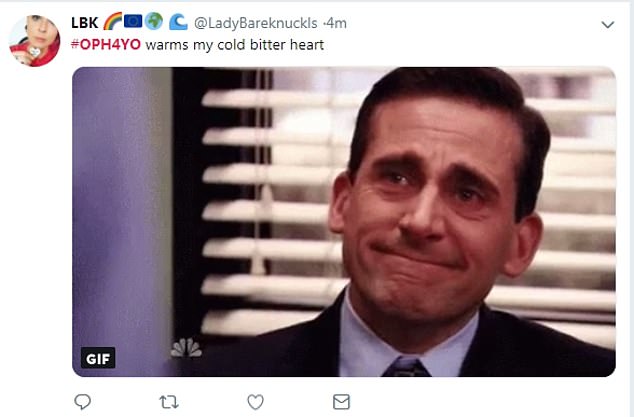 The emotional scene plucked on viewers’ heartstrings on Twitter (pictured), with one tweeting: ‘This warms my cold bitter heart’

Parkinson’s disease affects one in 500 people, and around 127,000 people in the UK live with the condition.

It causes muscle stiffness, slowness of movement, tremors, sleep disturbance, chronic fatigue, an impaired quality of life and can lead to severe disability.

It is a progressive neurological condition that destroys cells in the part of the brain that controls movement.

Sufferers are known to have diminished supplies of dopamine because nerve cells that make it have died.

There is currently no cure and no way of stopping the progression of the disease, but hundreds of scientific trials are underway to try and change that.

In the original programme, tests showed that Lavinia’s memory and ability had been boosted by spending time with the children, and in tonight’s spin-off show she was tested again to see if she’d maintained her progress.

For much of the episode the group prepared for the Christmas party at the end of their last week together, including learning a dance routine to perform at the event.

Lavinia, who is the youngest in the pensioners group, decided she wanted to take part and twirled around the room with ease.

She said: ‘[It was] absolutely exhilarating. It’s the first time I’ve done that for years, at least 10 years since I last danced. It’s nice to be part of the group rather than looking and saying I wish I could do that still.

‘My Parkinson’s never gets better but you can help it. I can do everything I did before but maybe in a different way.’

In the original series Lavinia and her new friend Mason, four, won the hearts of viewers as they followed the pair’s budding relationship. 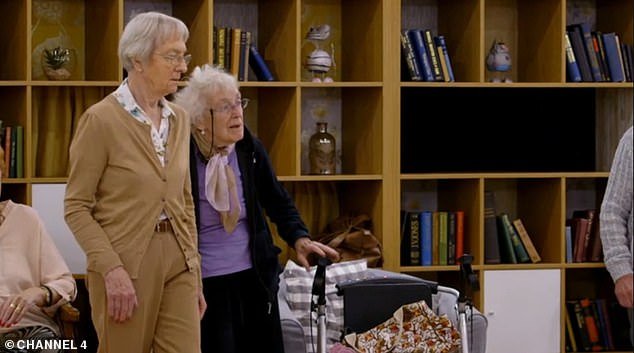 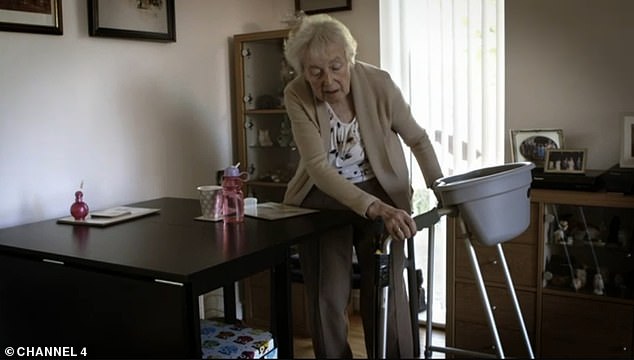 Parkinson’s, which can leave sufferers with muscle stiffness and slowness of movement, has meant that Lavinia has to rely on mobility aids such as scooters and walking frames (pictured) to get around 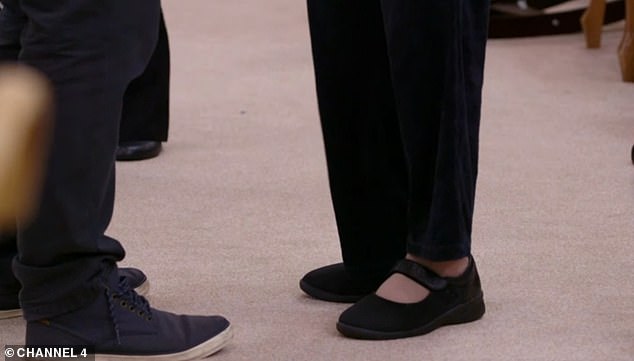 The group was split up into teams and tasked with navigating a maze, but Mason had to rescue Lavinia when she became stuck.

At 81, Lavinia is the youngest of the elderly group, and says that the children have now given her ‘something to get up for in the mornings.’

Four years ago she and her husband of 52 years, Len moved from London to Larkhill, but just six weeks later Len died. 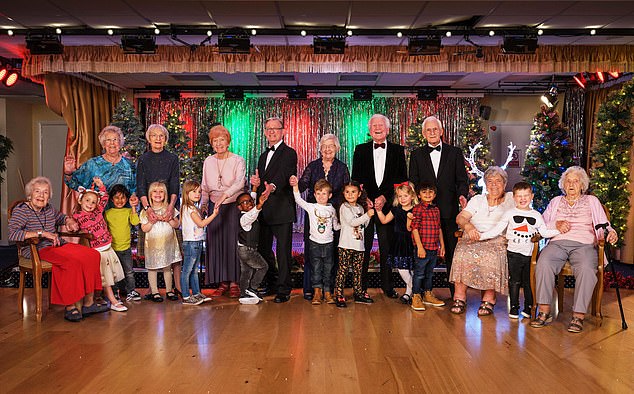 Old People’s Home for 4 Year Olds: Christmas  caught up with the pensioners (pictured with the group of four-year-olds) to see if they’d maintained their progress from the original experiment 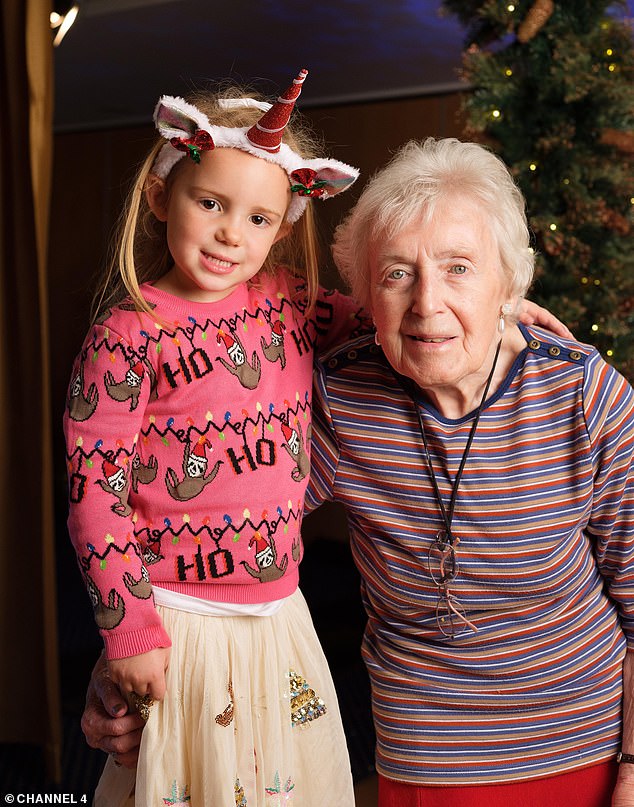 She has vowed not to let Parkinson’s ‘beat’ her and continue to do all the thing she used to do but ‘maybe in a different way’. Pictured: Lavinia (left) with Lois (right), one of the children who took part in the experiment

As part of the Channel 4 experiment, the youngsters relocated to a temporary nursery set up at Lark Hill Village, Nottingham, which is home to more than 400 OAPs, for three months.

In parts of the US, nurseries have existed in old people’s homes for 25 years, but last year’s Channel 4 series set in Bristol was the first time a similar scheme had been attempted in the UK.

This year it was the turn of Lark Hill Village where ten pensioners ranging in age from 81 to 102 were chosen to take part, with a team of experts on hand to test how their mood, memory and mobility could be impacted by regular interaction with children. 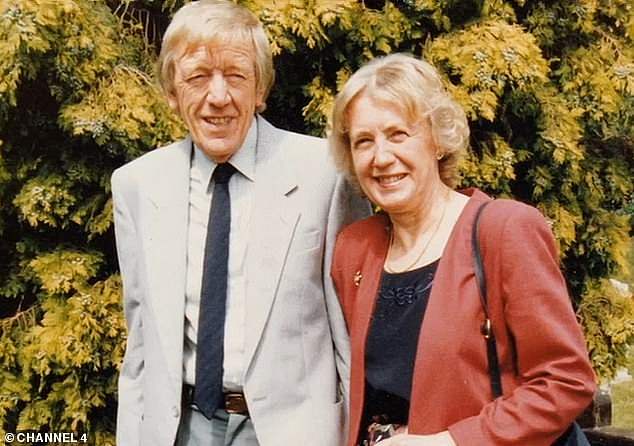 Lavinia tragically lost her husband of 52 years, Len (pictured together) four years ago after moving to Lark Hill Village, Nottingham where the experiment was filmed over the summer and for the festive special 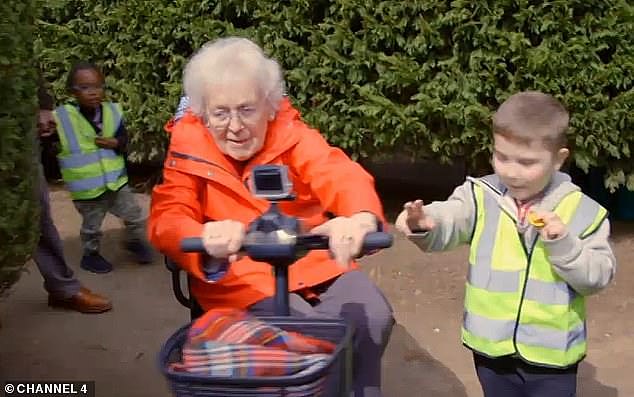 In the original series viewers were won over when Mason, four, (right) saved Lavinia (left) from a maze after she got lost on her mobility scooter

The pensioners this time were much older and the nursery ran for twice as long, stretching the older group’s stamina with excursions, dancing and a daily timetable of nursery activities.

A team of geriatric specialists medically tested the impact the children had on the older group and the results demonstrated significant improvements in mood, movement and mobility of the older group.

Old People’s Home for 4 Year Olds: Christmas is now available to watch on All 4