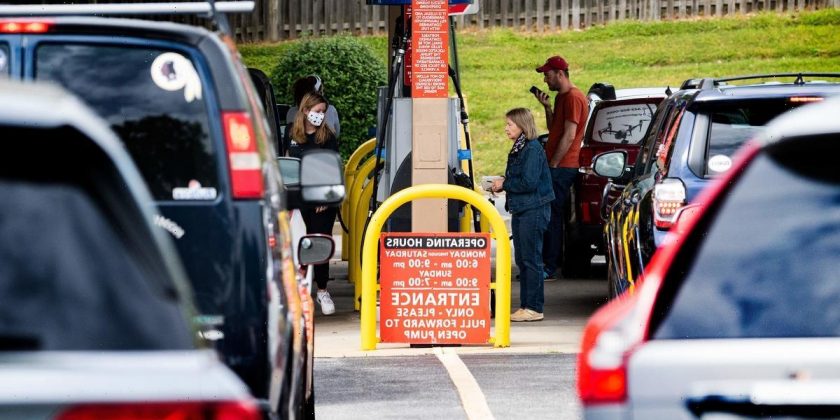 Officials are warning people not to pour gasoline into plastic bags amid panic over a shortage of gas in southeastern states. The shortage comes after a massive hack of Colonial Pipeline, which supplies 4% of the East Coast’s total fuel, by a Russia-based criminal group.

From Maryland to Florida, social media posts show vehicles waiting in long lines for gas. At least two tweets — a photo of a car trunk holding clear bags filled with gasoline and a video of a woman pouring gas in a plastic bag — suggested panicked customers were storing gasoline in bags. While the posts were found by Snopes to be several years old, the U.S. Consumer Product Safety Commission nevertheless posted a flurry of tweets advising people not to carry gasoline in plastic bags or any other container not approved to carry fuel.

“Do not fill plastic bags with gasoline,” the agency tweeted Wednesday.

Do not fill plastic bags with gasoline.

“We know this sounds simple, but when people get desperate they stop thinking clearly,” the commission added. “They take risks that can have deadly consequences. If you know someone who is thinking about bringing a container not meant for fuel to get gas, please let them know it’s dangerous.” The commission added that people should never pour gasoline over or near an open flame.

“This is a time to be sensible and to be safe,” Buttigieg said. “Of course, we understand the concern in the areas where people are encountering temporary supply disruptions, but hoarding does not make things better. Under no circumstances should gasoline ever be put into anything but a vehicle directly or an approved container, and that of course, remains true no matter what else is going on.”

Buttigieg warns as several states face gas shortages: “Hoarding does not make things better, and under no circumstances should gasoline ever be put into anything but a vehicle directly or an approved container. And that of course remains true no matter what else is going on.” pic.twitter.com/NGHnSg1wwT

Experts say the shortages are primarily due to panic buying and hoarding.

Colonial Pipeline was hit by hacker group DarkSide on Friday, according to the FBI, forcing it to shut down operations. While a large part of the system is back online and more is expected to be operational by the end of the week, gas prices in several states have spiked to a nearly seven-year high. According to Gas Buddy, about 1,800 stations across the U.S. are out of fuel.