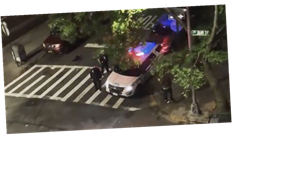 A New York City police officer was caught on video saying “Trump 2020” over a speaker while patrolling a Brooklyn neighborhood on Saturday night. Now, that officer has been suspended, according to NYPD Commissioner Dermot Shea.

Witness Eric Jenkins-Sahlin captured video of the incident and spoke to CBS New York about what he saw. “I heard somebody say ‘Trump 2020,’ and there was kind of some maybe low-key shouting back and forth,” Jenkins-Sahlin said. He said he hit record when he heard the officer and someone else get into a confrontation around 10 p.m.

Jenkins-Sahlin filmed a 30-second video from his apartment window, CBS New York reports. A voice is heard saying “Trump 2020,” then chiding a bystander, telling him, through the speaker, to “take a picture, take a video, put it on your Facebook, put it on your YouTube, have fun.” He also calls the bystander a “tough guy.”

On Sunday, the NYPD announced the officer was suspended without pay and is under investigation. On-duty or in-uniform officers are prohibited from “endorsing political candidates or publicly expressing personal views and opinions,” according to the NYPD’s patrol guide, CBS New York reports.

Law Enforcement must remain apolitical, it is essential in our role to serve ALL New Yorkers regardless of any political beliefs.

It is essential for New Yorkers to trust their Police.

“Law Enforcement must remain apolitical, it is essential in our role to serve ALL New Yorkers regardless of any political beliefs. It is essential for New Yorkers to trust their Police,” Shea’s tweet continued.

Chief of Department Terence Monahan tweeted that “behavior like this will not be tolerated and will be dealt with.”

The Sergeants Benevolent Association (SBA) disagreed with the suspension, referencing a photo of Monahan, who kneeled with Black Lives Matter protesters earlier this year.

“The NYPD has a history of officers making political & outside the norm statements & ignoring it. Suspending this officer is unnecessary & way over the top,” SBA tweeted. “Chief of Departrnent [sic] took a knee with protestors no disciplinary action was issued. What if the officer supported Biden?”

Mayor Bill de Blasio supported the NYPD’s decision to suspend the officer, tweeting: “ANY NYPD Officer pushing ANY political agenda while on duty will face consequences.”

CBS New York reports that it is unclear how long the officer will be suspended without pay, or if further disciplinary action will be taken. CBS News has reached out to the NYPD for more information and is awaiting response.