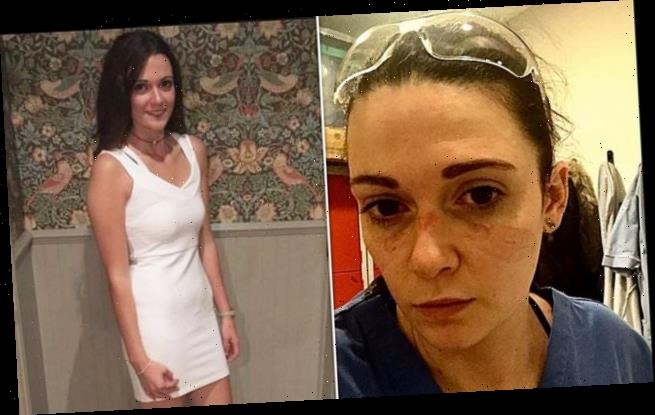 An NHS nurse has revealed she had a panic attack and burst into tears after working on a ward with coronavirus patients because she’s ‘so scared’ – and her mask fits so tightly to her face it hurt an hour into her 12-hour shift.

Frankie Creedy, from Taunton in Somerset, moved away from her family to keep them safe while she continued working as a Paediatric nurse at Musgrove Park Hospital amid the COVID-19 pandemic.

In an emotional Facebook post, she explained why she has not time for people complaining they feel frustrated or lonely during lockdown, saying: ‘Come hang out with me for five minutes… I promise you’ll be so scared, you’ll forget you were ever bored.’

There have been more than 260 confirmed cases in Somerset, with 12 deaths so far, while the UK death toll has surpassed 6,000, after a record 854 fatalities in a day. 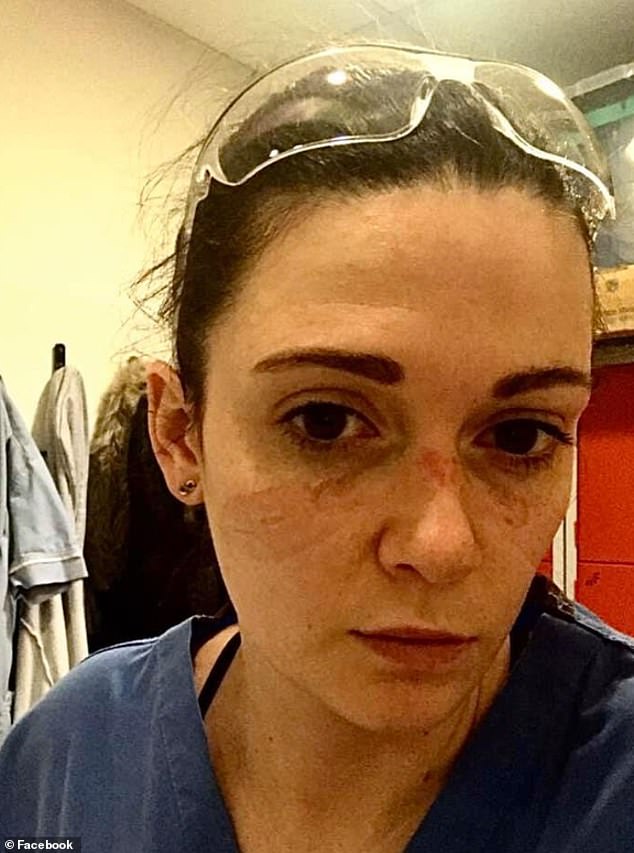 Frankie Creedy (pictured), from Taunton in Somerset, moved away from her family to keep them safe while she continued working as a Paediatric nurse at Musgrove Park Hospital

‘Did you wake up and cry because you have to stay home another day? I woke up and cried because it was my turn to float to the positive floor,’ Frankie asked in her Facebook post.

She added that anyone would be ‘so scared’ if they were in her position.

She has no time for those who complained about missing their friends and family because the patients Frankie works with are ‘isolated and alone in a hospital bed’.

And she revealed she can’t even have a drink of water because she is not allowed to removed her mask without potentially infecting herself with the virus. 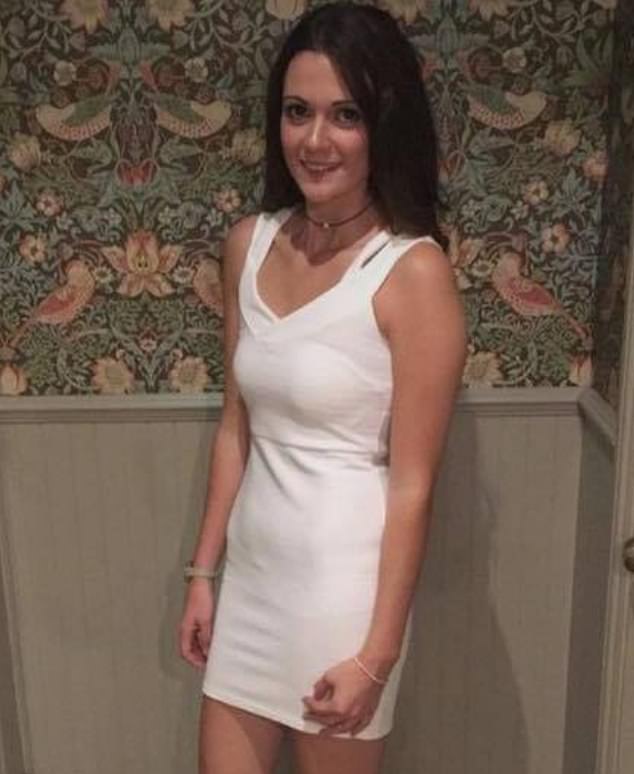 Frankie, pictured, has shared a lengthy status on Facebook asking others to stay inside their homes to help stop the spread while she risks her life to keep working 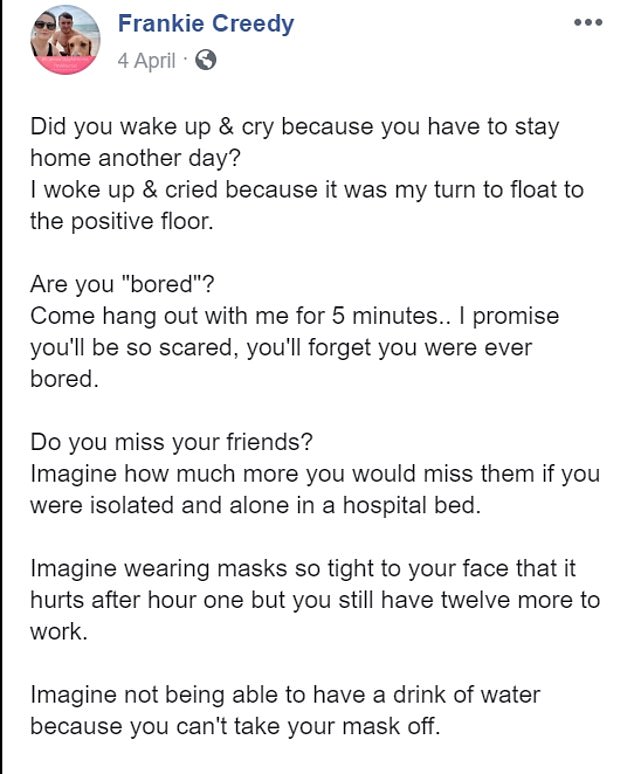 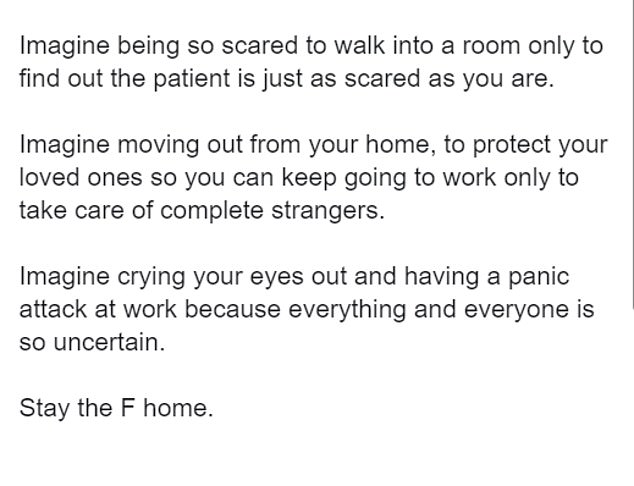 In an impassioned Facebook post, Frankie begged people to stay at home as she described the fear she experiences in her job as a nurse every day

Asking others to see the illness from her perspective she added: ‘Imagine wearing masks so tight to your face that it hurts after hour one, but you still have twelve more to work.’

Frankie said her patients were even more frightened than she was as they lay in intensive care.

She added: ‘Imagine crying your eyes out and having a panic attack at work because everything and everyone is so uncertain.

‘Imagine moving out from your home, to protect your loved ones so you can keep going to work only to take care of complete strangers.’

She finished: ‘Stay the F home.’ 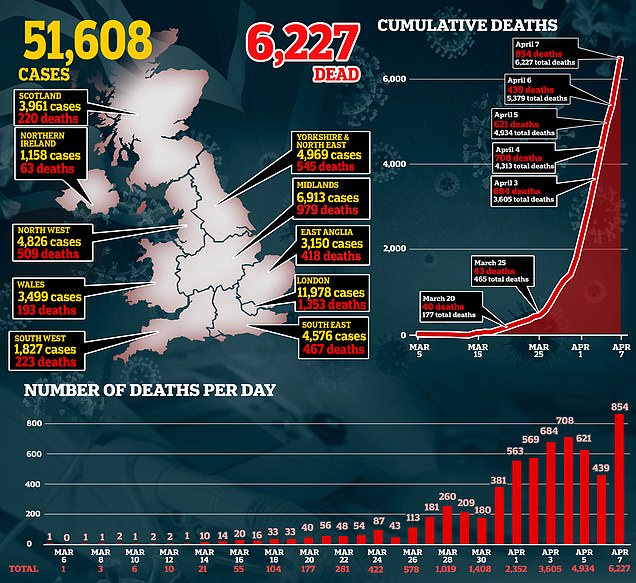 It comes as a record high of 854 coronavirus deaths have been announced in the UK today, taking the total to 6,227.

NHS England has confirmed 758 people have died, with authorities in Scotland, Wales and Northern Ireland announcing a further 96 between them.

Scotland revealed 74 more deaths had been recorded in the past 24 hours, along with 19 in Wales and three in Northern Ireland.

Medics fighting the coronavirus crisis on the frontline have begged the Government to provide proper face masks, gloves and aprons amid claims of a nationwide shortage of Personal Protective Equipment (PPE).

The British Medical Association has already warned that doctors will die unless they are given adequate protection.

Jenny Harries, the deputy chief medical officer, admitted there had been ‘distribution issues’ earlier this month but insisted the UK had enough PPE to cope with the pandemic.

Millions of masks, gloves, aprons and other items were delivered to hospitals last week, the Government said, with the Army helping to get them out nationwide.

Import taxes on such clothing, ventilators and virus testing kits have also been waived to ease supply, the Chancellor said.

But, despite this, unions representing healthcare workers say their members are complaining in droves about shortages of safety equipment.

The GMB said some social care staff were being expected to make visits with just a plastic apron and a pair of gloves – ‘the same protection that they use to make a sandwich.’

And the Doctors’ Association UK Ltd has claimed doctors and nurses are being ‘bullied and shamed’ into treating coronavirus patients and are told to hold their breath due to a lack of masks.

‘Lack of personal protective equipment continues to be a critical issue. It is heartbreaking to hear that some staff have been told to simply “hold their breath,” due to a lack of masks,’ Dr Samantha Batt-Rawden, president of the Doctors’ Association UK, told The Guardian.