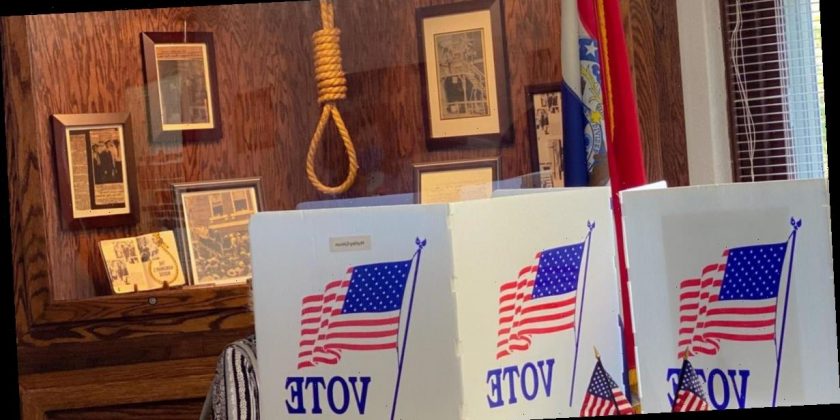 A replica hangman’s noose on display near voting booths in a southwest Missouri county building has been covered up following complaints from Democrats that it amounted to intimidation of Black voters. The Missouri Democratic Party released a photo Friday of the display with several voting booths nearby in a hallway of the Stone County building in downtown Galena about 20 miles northwest of Branson, The Kansas City Star reported.

The noose was hanging in the corner of a display cabinet next to photos.

Stone County Clerk Cindy Elmore said the display was put up several years ago and “has nothing to do with the election office.” She said it was a historical exhibit with a replica noose marking the last legal execution by hanging in the state, which occurred in Stone County in 1937.

Elmore said the noose was covered up Friday morning.

Clem Smith, the acting chair of the Missouri Democratic Party, said the noose’s display next to voting booths amounted to intimidation of Black voters. Smith said in a statement that this “symbol’s purpose is to stoke the fires of racial prejudice and strike fear in the hearts of people of color.”

“It is unconscionable to have such a symbol of violence and terror at the exact location where voters go to exercise their most fundamental right,” the committee said in a statement. “Voter intimidation is a felony, and we cannot think of a clearer example of voter intimidation to people of color than a noose on display directly behind their voting both.”